Kim Portnoy is recognized as a versatile composer in classical and jazz idioms.  His compositions have been featured nationally and internationally at the Eastman Summer Trombone Institute in Rochester, New York; the Choral Music Experience Institute in Arvika, Sweden; the Guitar Foundation of America Conference at Oberlin Conservatory of Music in Ohio and two International Association of Jazz Educator's conferences: New Orleans and Atlanta.

Portnoy received an Artist Fellowship from the Regional Arts Commission for 2018.  He is the recipient of two Fiscal Year Creative Artist Project Awards from the Missouri Arts Council and a grant from the Thomas Talbert Foundation. He has received commissions from the United States Air Force Band of Mid-America, the piano team Duo Albireo, The Original Boneheads trombone quartet, The Missouri Music Teacher's Association, the St. Louis Children's Choirs and the McDonnell Planetarium.

He has worked with St. Louis Symphony concertmaster David Halen and jazz vocalist Erin Bode as pianist and arranger. The Florida Space Coast Orchestra, the Jacksonville Symphony Orchestra and the Webster Symphony have also performed his arrangements.

Hailed for their outstanding musicianship, the Arianna String Quartet has firmly established itself as one of America's finest chamber ensembles. Their performances have been praised for "tonal warmth, fastidious balance…expessive vitality" (Chicago Tribune) and "emotional commitment and fluent  virtuosity," (Pretoria  News, South Africa). Formed in 1992, the ASQ garnered national attention by winning the Grand Prize in the Fischoff Chamber Music Competition, First Prize in bothe the Coleman and Carmel Chamber Music Competitions, and were Laureates in the Bordeaux International String Quartet Competition.

The Arianna Quartet has appeared throughout North America, South America, Europe and Asia, with frequent visits to Brazil and South Africa.  They have collaborated with many of the world's finest musicians, including members of the Vermeer, Tokyo, Cleveland and Juilliard Quartets, and their live performances have been heard on National Public Radio's "Performance Today," and "Live from Music Mountain", which broadcasts to 125 stations in the U.S. and to 35 countries.  The ASQ has recorded for Albany Records and Urtext Digital Classics, and has a long-term contract with Centaur Records. In addition to their critically acclaimed recording of the two string quartets of Janacek, the ASQ has also recently released recording of Beethoven's Early and Middle Quartets.

Hailed by the Boston Globe as "first class, with a robust sound and technique that seems to come from the center of the person" John McGrosso has been the first violinist of the Arianna String Quartet since 1998. He has been featured as soloist with the Chicago Symphony and the St. Louis Symphony Orchestra, and has performed in recital to critical acclaim throughout the United States. During seven years as a member of the St. Louis Symphony Orchestra's first violin section, Mr. McGrosso performed frequently in the orchestra's "Chamber Music St. Louis," and "Discovery" series, and originated the popular "On the Stage" series of unique audience engagement evenings. He has taught on the faculties of Illinois Wesleyan University, the University of Missouri-Columbia, and Eastern Michigan University, and is currently Associate Professor of Violin at the University of Missouri-St. Louis, where the Arianna Quartet is tenured and has been in residence since 2000. As a member of the Aarianna Quartet, he has collaborated with artists, such as James Campbell, Gilbert Kalish, Bernard Greenhouse, Richard Stoltzman, and members of the Tokyo, Vermeer, and Juilliard Quartets, and been on the summer faculties of the Britt Institute, Madeline Island, and Music at Port Milford.

Julia Sakharova, is an internationally established concert artist, known for her performances as soloist, orchestra performer, and chamber musician. She has been hailed for her "technically thrilling" and "powerful musical personality." Before joining the Arianna String Quartet she served as Assistant Concertmaster with the Alabama Symphony Orchestra, was a member of the Albany Symphony in New York, and was a founding member of the acclaimed Erato String Quartet.

In addition to the Arianna String Quartet's ongoing recording project with Centaur of the entire  Beethoven Cycle, Ms Sakharova was featured on Rachmaninoff's Elegiaque Piano Trios (Tavros Records) and on the recent 2014 release of Sean Hickey's Cursive – Piano and Chamber Works (Delos). Mr. Hickey dedicated Ampersand, a work for violin and piano, to Ms. Sakharova, which she debuted at a 2006 Steinway Hall recital.

Prior to joining the Arianna Quartet, Ms. Mendoza performed with the Harrington String Quartet for 10 years. During that time, they premiered "String Circle," a viola quintet by composer/violist Kenji Bunch, commissioned and written for Ms. Mendoza. The Harrington Quartet was featured in a PBS television documentary, "A Sound Collaboration-The Harrington String Quartet," and recorded the complete string quartets of Daniel McCarthy on the Albany Record label.

Kurt Baldwin is Associate Professor of Music at the University of Missouri, St. Louis, where the Arianna String Quartet has been in residence since 2000. As a founding member of the Arianna String Quartet in 1992, Mr. Baldwin has been awarded the Grand Prizes at the Fischoff Competition, Coleman Competition, and Carmel Competition, and was a Laureate at the 1999 Bordeaux International String Quartet Competition. Mr. Baldwin has concertized throughout the United States, Canada, Mexico, Italy, France and Japan, has been heard in live radio broadcasts in over 30 states and on NPR's "Performance Today", and has recorded for the Albany, Centaur and Urtext classical labels. He has collaborated with members of the Tokyo, Cleveland, Juilliard, and Vermeer quartets, as well as Richard Stoltzman, Bernard Greenhouse, Gilbert Kalish and James Campbell.

The Equinox Trio includes three of St. Louis' most accomplished and versatile woodwind artists: flutist Paula Kasica, clarinetist, Jeanine York-Garesche, and bassoonist Donita Bauer. As first call musicians, they have performed for many of St. Louis premier ensembles including: Union Avenue Opera, the Fox Theatre Orchestra, the Bach Society of St Louis, as well as serving as replacement players with the St Louis Symphony and Opera Theatre of St. Louis.

Since 1999 they have been members of the Equinox Chamber Players, one of St. Louis' most dynamic performing chamber groups.

She and her husband John have toured the world as "WINDFIRE": Flute & Percussion Spectacular" and they recently released two CDs of their favorite works for flute and percussion. In 2006 WINDFIRE won the Chamber Music Award from the National Flute Association.  Paula is currently flute instructor at Webster University, St. Louis.

Jeanine is known throughout the Midwest as a private instructor, chamber music coach and clinician.  Her students have won top honors in Missouri's District and State competitions and honor bands.  A sought-after chamber musician and recitalist, she also serves on the faculties of the University of Missouri-St Louis, Webster University and the Community Music School of Webster University.

Donita Bauer, bassoonist, has enjoyed a varied musical background. Through the years she taught high school band and orchestra, has been active as an organist and choir director, played principal bassoon for the Orchestra Sinfonica del Estado de Mexico, played keyboard in a country band and was a founding member of the French duo ‘The Poor People of Paris.'

Donita is active in the teaching field through private instruction, serves on the faculties at the Community Music School of Webster University, Lindenwood University and the University of Missouri, St. Louis.

John McClellan and Kirk Hanser began performing together in 1996, each already being an established solo artist in his own right. As a duo, they quickly became known for their choice of entertaining programs, their technical and musical prowess, and their abilities for connecting with audiences. Over the past several years, they have become recognized by critics and audiences alike as one of the most enjoyable and highly respected chamber music groups in the U.S.

John McClellan's playing has been described as "masterly...with a virtuous warm tone...fluid phrasing and a strong sense of rhythm" (The Brisbane Courier Mail, Brisbane, Australia). A master of many musical styles, John has been heard in concert and on recordings with Luciano Pavarotti, Vince Gill, Tim Thompson, Mark Knopfler (Dire Straits), to name a few. As a soloist, John has done major tours of the U.S. and Australia.

Kirk Hanser "is a superb guitarist...possessing an authentic musical personality" writes author and music critic Erik Eriksson (The DC Advocate). Kirk has performed throughout the U.S., Europe and Japan as soloist with orchestra, with various chamber groups and on solo guitar. He has appeared on numerous recordings with a wide range of artists and organizations, and is an author for Warner Brothers Publications and Mel Bay Publications with numerous books in print ranging in style from classical to jazz, rock to country. A session musician for many years and adept at working in various styles, Kirk is a "first-call guitarist" for various groups including the St. Louis Symphony Orchestra.

Since 2006, the Trombones of the Saint Louis Symphony have taken their finely-honed ensemble skills from the symphonic concert stage and into chamber music settings across the US. The International Trombone Association Journal, in a review of their most recent recording, Fleur de Lis, cited "an astonishing amount of versatility and virtuosity."  All four members of the group are Edwards Artists.

The members of the quartet have developed the trombone quartet repertoire by making their own arrangements of classic works by Bruckner, Gabrieli, Gershwin, Hindemith, and Mozart. New original works have also been written for the group by Caleb Burhans, Tom Hanson, Martin Kennedy, and Adam Maness, all of whom have Saint Louis connections.

A graduate of the Juilliard School, Gerry Pagano joined the St. Louis Symphony in 1995.  He has performed a wide variety of music styles in his career, including jazz, salsa, opera, ballet, and chamber music.  He founded the St. Louis Low Brass Collective, an education organization for low brass in St. Louis, and he is a frequent guest artist in recital at colleges around the country.

Jonathan Reycraft has held a trombone position with the St. Louis Symphony since the 2006-07 season. He also serves as faculty at Washington University and St. Louis University. Before joining the STL Symphony, he served for the US Naval Academy Band in Annapolis, Maryland. Reycraft completed his Bachelor of Music degree at the Indiana University School of Music in the spring of 1998, and his Master of Music from  University of Maryland in 2005.

Amanda Stewart is the Associate Principal Trombone of the St. Louis Symphony as of 2014.  She began studies with Harold Hudnall and continued with Dr. Keith Jackson of West Virginia University. She then received her Bachelor of Music degree from The Juilliard School, studying with Joseph Alessi.  She was Principal trombonist of the San Antonio Symphony for eight seasons and Associate Principal trombonist of the New York Philharmonic for two seasons.   Also, she has performed extensively as an extra with the Boston Symphony. 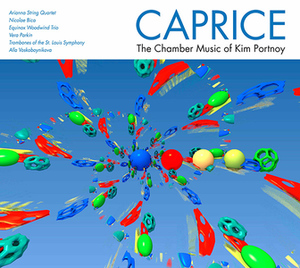 What do Hollywood musicals, a Cajun chef and 12 tone composer Anton Webern have in common' They have all inspired composer Kim Portnoy's genre bending new chamber music   recording, "Caprice."

The CD features performances by such nationally and internationally renowned artists as The Trombones of the Saint Louis Symphony Orchestra; the Arianna String Quartet; the Hanser/McClellan Guitar Duo as well as some of St. Louis's finest classical performers.

A composer, arranger, jazz pianist and educator, Portnoy is director of Composition Studies at Webster University, St. Louis. His works have been performed in France, Brazil, Canada, Sweden and throughout the United States. Portnoy's music has been recorded by Saint Louis Symphony trombonist Gerry Pagano, the United States Air Force Band of Mid-America, and  jazz pianist and vocalist Christine Hitt.