One of the most renowned, most lyrical pianists in jazz today, Barron was awarded the prestigious title of Jazz Master, in the class of 2010--an honor bestowed by the National Endowment for the Arts. He is a multiple-Grammy® Award- nominee, was honored with induction into the American Jazz Hall of Fame (2005), and received the MAC Lifetime Achievement Award (2005) and the Mid Atlantic Arts Living Legacy Award (2009). In 2009, Barron was inducted as a Fellow in the American Academy of Arts and Sciences, an esteemed honorary society and center for independent policy research.

While relishing the accolades, Barron reflects on his career as a world renown-artist as a work in progress. "I don't   think of myself necessarily as an innovator," he says. "But what I have contributed to jazz is keeping a commitment to the honesty of the music. I never do anything that's too slick, and I play what I feel. I believe in having fun, which took a long time to discover-to not take myself so seriously."

As a composer, arranger and bandleader, Barron has spent close to six decades at the forefront of the jazz piano aristocracy. As a co-founder of the seminal quartet Sphere--featuring Charlie Rouse, Buster Williams and Ben Riley--  he focused on the music of Theolonious Monk and original compositions inspired by the late visionary. An in-demand sideman in his early days on the jazz scene, performing with Dizzy Gillespie, Yusef Lateef, and his fruitful collaboration with Stan Getz, the Philadelphia native launched his solo career in 1973 with Sunset to Dawn, released by Muse Records. Not one to rest on his laurels, Barron continues to tour widely--and learning more as he goes.

Barron is already thinking of his next projects for Impulse. He notes that the sessions which bore fruit on Book of Intuition were recorded in a two-day span that yielded 20 pieces-more music for hopefully another album. He's also thinking of perhaps putting together a quintet for his next Impulse date. "I feel like I'm still evolving, trying to grow," he says. "As I get older, I find that I'm more willing to leave my comfort zone and take chances as an improviser."

Honored by The National Endowment for the Arts as a 2010 Jazz Master, Kenny Barron has an unmatched ability to mesmerize audiences with his elegant playing, sensitive melodies and infectious rhythms. The Los Angeles Times named him "one of the top jazz pianists in the world" and Jazz Weekly calls him "The most lyrical piano player of our time."

Philadelphia is the birthplace of many great musicians, including one of the undisputed masters of the jazz piano: Kenny Barron. Kenny was born in 1943 and while a teenager, started playing professionally with Mel Melvin's orchestra. This local band also featured Barron's brother Bill, the late tenor saxophonist.

While still in high school. Kenny worked with drummer Philly Joe Jones and at age 19, he moved to New York City and freelanced with Roy Haynes, Lee Morgan and James Moody, after the tenor saxophonist heard him play at the Five Spot. Upon Moody's recommendation Dizzy Gillespie hired Barron in 1962 without even hearing him play a note. It was in Dizzy's band where Kenny developed an appreciation for Latin and Caribbean rhythms. After five years with Dizzy, Barron played with Freddie Hubbard, Stanley Turrentine, Milt Jackson, and Buddy Rich. The early seventies found Kenny working with Yusef Lateef who Kenny credits as a key influence in his art for improvisation. Encouraged by Lateef, to pursue a college education, Barron balanced touring with studies and earned his B.A. in Music from Empire State College, By 1973, Kenny joined the faculty at Rutgers University as professor of music. He held this tenure until 2000, mentoring many of today's young talents including David Sanchez, Terence Blanchard and Regina Bell. In 1974 Kenny recorded his first album as a leader for the Muse label, entitled "Sunset To Dawn." This was to be the first in over 40 recordings (and still counting!) as a leader.

Following stints with Ron Carter in the late seventies Kenny formed a trio with Buster Williams and Ben Riley which also worked alongside of Eddie Lockjaw" Davis, Eddie Harris, Sonny Stitt and Harry "Sweets" Edison. Throughout the 80's Barron collaborated with the great tenor saxophonist Stan Getz, touring with his quartet and recording several legendary albums including "Anniversary", "Serenity" and the Grammy nominated "People Time" Also during the 80's, he co-founded the quartet "Sphere," along with Buster Williams, Ben Riley and Charlie Rouse. This band focused on the music of Thelonious Monk and original compositions inspired by him. Sphere recorded several outstanding projects for the Polygram label, among them "Four For All" and "Bird Songs." After the death of Charlie Rouse, the band took a 15-year hiatus and reunited, replacing Rouse with alto saxophonist Gary Bartz. This reunion made its debut recording for Verve Records in 1998.

Kenny Barron's own recordings for Verve have earned him nine Grammy nominations beginning in 1992 with "People Time" an outstanding duet with Stan Getz followed by the Brazilian influenced "Sambao and most recently for "Freefall" in 2002. Other Grammy nominations went to "Spirit Song", "Night and the City" (a duet recording with Charlie Haden) and "Wanton Spirit" a trio recording with Roy Haynes and Haden. It is important to note that these three recordings each received double-Grammy nominations (for album and solo performance.) His CD, "Canta Brasil" (Universal France) linked Barron with Trio de Paz in a fest of original Brazilian jazz, and was named Critics Choice Top Ten CDs of 2003 by JazzIz Magazine. His 2004 release, Images (Universal France) was inspired by a suite originally commissioned by The Wharton Center at Michigan State University and features multi-Grammy nominated vibraphonist Stefon Harris. The long awaited trio sequel featuring Ray Drummond and Ben Riley, The Perfect Set, Live At Bradley's, Part Two (Universal France/Sunnyside) was released October 2005.

In Spring 2008 Mr. Barron released The Traveler (Universal France), an intoxicating mix of favorite Barron tunes set to lyrics and newly penned compositions. For his first vocal based recording, Barron invited Grady Tate (who sheds his drumsticks for this special appearance), Tony award winner Ann Hampton Calloway and the young phenom Gretchen Parlato, winner of the Thelonious Monk International Competition for Jazz. On "Um Beijo", Mr. Tate's warm, leathery voice balanced by Mr. Barron's poignant touch make for a beautifully textured conversation, underscoring their longtime on stage collaboration. Another Barron original, "Clouds" is a lush vehicle for Ann Hampton Calloway's romantic pitch-perfect yearnings matched with Barron's trademark mastery of subtlety. The dramatic "Phantoms" intertwines Parlato's ephemeral intimacy and syncopatic rhythms in an emotional escapade between Barron's haunting notes, the West African stylings of guitarist Lionel Loueké, drummer Francisco Mela (who also adds a Cuban flavor to the vocals) and the driving bass of Kiyoshi Kitagawa. The journey continues with the aptly named "Duet" an improvisation with Benin-born Loueké who also joins the trio for a rousing version of Barron's "Calypso". A composer who relishes in the moment, Barron's modern approach is highlighted by alto saxophonist Steve Wilson's open musings on "Illusion" and "The Traveler" who also brings an urgency to the fun-paced "Speed Trap".

After a successful musical meeting of the minds with bassist Dave Holland, the two masters decided to collaborate on a duet project to be released on Impulse/Universal records in 2014 followed by a tour.

Barron consistently wins the jazz critics and readers polls, including Downbeat, Jazz Times and Jazziz magazines. The famed Spanish ceramist Lladro honored Mr. Barron with a Lifetime Achievement Award in 2012 and he was awarded an Honorary Doctorate from his alma mater SUNY Empire State in 2013 and from Berklee College of Music in 2011. In 2009 he received the Living Legacy Award from Mid-Atlantic Arts Foundation and was inducted into the American Jazz Hall of Fame and won a MAC Lifetime Achievement Award in 2005. He is a six-time recipient of Best Pianist by the Jazz Journalists Association.

Whether he is playing solo, trio or quintet, Kenny Barron is recognized the world over as a master of performance and composition. 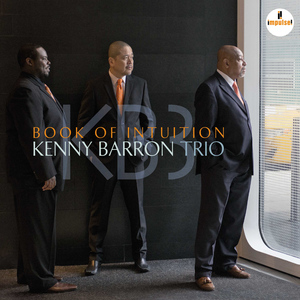 Remarkably, while piano maestro Kenny Barron has recorded more than 40 albums as a leader and countless others as a valued sideman, he had never documented his impressive working trio of bassist Kiyoshi Kitagawa, with him for 20 years, and drummer Johnathan Blake, onboard for the past 10 years. That missing piece in Barron's lengthy discography has been sublimely addressed with his new recording, Book of Intuition, a refined, elegant, lyrical and swinging affair of new and reimagined originals and a triad of covers, including two obscure Thelonious Monk compositions. It's the second of a series of recordings Barron will be delivering for impulse! Records, remarkably revived in 2014 by veteran recording executive and producer Jean-Philippe Allard as a division of Universal Music France.