With 6 critically acclaimed CDs and a Grammy nomination for Best Jazz Vocal CD Kate McGarry has become recognized as a jazz artist who brings authenticity and vitality to every song regardless of genre. The Wall St. Journal calls her music,"Austere and elegant," New York Times pronounced it, "astute and sensitive".  She currently performs in jazz clubs, performing arts centers and festivals throughout the US and abroad. As an educator she has taught at New England Conservatory and currently serves on the faculty of Manhattan School of Music.  Downbeat Magazine cited McGarry as 'Rising Star' vocalist for the past 9 years. In July of 2016  Downbeat's 64th Critics Poll named McGarry the #1 Rising Star Female Vocalist.  She has been interviewed on All Things Considered, and has performed on Jazz Set w/DeeDee Bridgwater, Piano Jazz w/Marion McPartland, and a host of nationally syndicated radio shows.

Singer Kate McGarry grew up in Hyannis, Mass., one of 10 children in a musical family that spent many nights singing together. At the University of Massachusetts Amherst she earned a degree in Afro-American Music and Jazz. Kate began developing her organic vocal style through early training in jazz performance with Dr Horace Boyer and iconic saxophonist Archie Shepp. Her experiences studying at a meditation ashram and exploring Celtic, Brazilian and Indian music also contributed to her widescreen vision as a vocalist and composer. After years honing her craft in Los Angeles, McGarry moved to New York where her independently produced (by Steven Santoro) debut album, Show Me, was picked up by Palmetto Records. Jazziz Magazine declared, "With this near-flawless album, she has arrived."

In 2005 McGarry's Mercy Streets album – which ranged from the Peter Gabriel title track to songs by Björk, Joni Mitchell and Irving Berlin – was called "one of the most important vocal albums of the year" by All About Jazz. Featuring originals alongside tunes by Sting and Bill Evans/Miles Davis, her album The Target was named one of the best jazz vocal albums of 2007 by Downbeat. The Downbeat reviewer called the recording "a milestone of maturity," adding: "McGarry has the pure untrammeled voice of an ingénue who finds wonder in the simplest of things." Her 2008 album, If Less Is More, Nothing Is Everything, was nominated for a Grammy Award, with The Wall Street Journal calling it "an exceptionally appealing blend of folk and jazz" for its mix of originals, standards, Brazilian tunes and songs by the likes of Bob Dylan. National Public Radio said: "Kate McGarry is called a jazz vocalist, but she's hard to pin down. She draws on the music of her youth to inspire her – from the Irish tunes of her family's roots to musical theater to pop songs."

In 2008 Kate and her husband Keith Ganz made a foray into children's music writing and recording 63 original children's songs for the Heinle Picture Dictionary for Children, a bestselling international ESL educational product. Kate was then asked to sing the theme song for the hit children's show, The WonderPets in a special jazz episode that featured the great Eartha Kitt and Jon Hendricks as The Cool Kat and the Hip Hippo.

Kate is a member of the vocal collective MOSS which features Theo Bleckmann, Peter Eldridge, Lauren Kinhan and Luciana Souza. The group's debut CD, MOSS on Sunnyside Records garnered a rare 4.5 Stars from Down Beat Magazine.

McGarry's 2012 CD for Palmetto Records Girl Talk was a tribute to her favorite visionary jazz women vocalists. It garnered 4 stars in Downbeat Magazine and showed up on over 20 Best of 2012 jazz critic's lists. Her 2013 collaboration with John Hollenbeck Large Ensemble, Songs I Like A Lot, was lauded as a milestone in contemporary vocal jazz, receiving a Grammy™nomination for Best Arrangement For A Vocalist. Collaborations with Ryan Truesdell, Jeremy Fox have resulted in great learning opportunities as well as additional Grammy nominations, awards and accolades.

Kate currently lives in Durham North Carolina with husband/guitarist Keith Ganz. The couple celebrated 10 years of musical and life partnership with their first live duo recording, Genevieve and Ferdinand, out on Sunnyside Records in 2014. The tunes, as is typical of their live sets, move freely between jazz, folk, Brazilian and singer songwriter genres and was lauded by critics and public alike.

Kate's vision for the future includes recording, touring, composing and collaborating as well as teaching and continuing to pass on the many gifts that the jazz music tradition has given to her.  As The Nashville Scene noted, "McGarry embraces jazz's freedom and points the genre toward a future that's as fresh and thrilling as it's past."

"Out of this world jazz chops" - Faze 3 Magazine

"Quiet and full of inspiration" – dynamicplanet.com

Keith's work as guitarist, arranger and producer on Kate McGarry's "If Less is More...Nothing is Everything" (Palmetto) helped garner a 2009 Grammy Nomination for Best Jazz Vocal Album. In 2012, they released their fourth album together for Palmetto Records, the critically acclaimed "Girl Talk". After a productive eleven-year stint in the jazz crucible of New York City, Keith and Kate now reside in Durham, NC where they have just recorded their first live duo album, "Genevieve & Ferdinand", to be released in 2013.

Since basing himself in NYC in 2002, originally hailing from Cos Cob, CT, jazz pianist, organist and accordionist Gary Versace has become one of the busiest and most versatile musicians on the scene, often featured in bands led by musicians such as John Scofield, John Abercrombie, Al Foster, Regina Carter, Maria Schneider, Madeleine Peyroux, Matt Wilson, Joe Magnarelli, Andy LaVerne, Adam Nussbaum, Brad Shepik, Ingrid Jensen and many others.

Recent CD releases include appearances as pianist on Ralph Alessi's 'Quiver" (ECM records) which received 4.5 stars in Downbeat, as accordionist on Maria Schneider's Grammy-winning 'The Thompson Fields,' as Hammond organist on Ellery Eskelin's 'Trio Willisau: Live' and Rich Perry's 'Organique,' and on all three instruments on Kurt Elling's 'Passion World.'

Versace won the "Rising Star' category on the Hammond organ in Downbeat's Critic's Poll in 2009 and 2010, and has placed in the primary Organ category consistently for the last 5 years. He won the Jazz Jounalists' Association's "Best Organist" award in 2012, and his work has been reviewed and featured in many national and international publications. He appeared twice as a guest on Marian McPartland's acclaimed NPR show 'Piano Jazz,' and McPartland has described him as '...endlessly inventive...(Versace) really has an extraordinary talent.'

He has several CD's under his own name on the SteepleChase and Criss Cross labels, and has appeared as a guest on almost 75 more.

Gary Versace has a masters degree in music performance from the Eastman School of Music, and spent eight years as a tenured associate professor in the jazz studies department at the University of Oregon. He remains active as a clinician and guest soloist both nationally and around the world.

The Subject Tonight Is Love 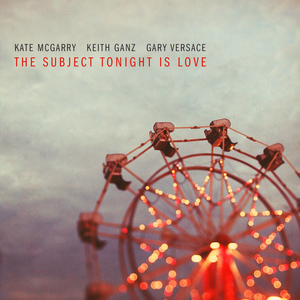 Countless poets, philosophers, artists, musicians, writers and dreamers have taken up that same subject since Hafiz's day, but despite seven intervening centuries of exploration, love continues to offer an inexhaustible supply of complexities and mysteries. On The Subject Tonight Is Love, their first album as a trio, vocalist Kate McGarry, guitarist/bassist Keith Ganz and keyboardist/accordionist Gary Versace rise to that eternal challenge, investigating the concept of love in its many forms and from several different perspectives over the course of a dozen alluring songs, from timeless folk tunes to transformed jazz standards, celebratory pop songs to evocative originals.

The Subject Tonight Is Love
https://www.facebook.com/KateMcGarryTrio/