"Fresh as a spring bouquet" (The New York Times), Kat Edmonson seemingly came out of nowhere in 2009 to take the Austin, TX music scene by storm. The Texas native grew up in Houston with a mother who introduced her to the Great American Songbook. Determined to be a singer, she auditioned for American Idol during its second season, but soon returned from Hollywood to Austin. Back in Texas, Kat became a regular at the Elephant Room, a premier Austin club, building a following and making musical connections that energized her career. Her self- released 2009 debut album Take To the Sky hit the top 20 on Billboard's jazz charts, adding enough juice that she found herself playing gigs with Willie Nelson and Lyle Lovett. A musical kinship with Lyle led to a high-profile duet on the Christmas classic "Baby, It's Cold Outside" which the pair performed together on tour as well as on The Tonight Show with Jay Leno. On her tour with Lovett, Kat opened nightly, performing songs on which she'd begun writing and working. This set the stage for Way Down Low, her second record and first to include her original material.

Determined to see through her creative vision and maintain control, Kat funded Way Down Low through a Kickstarter campaign. The money generated allowed her to record at the equally historic Avatar and Capitol Studios with legendary engineer Al Schmitt (Sam Cooke, Frank Sinatra, Neil Young) and input from Phil Ramone (Billy Joel, Paul Simon). Co-produced by Kat alongside Danton Boller, the LP is now being called "one of the greatest vocal albums I've ever heard" (The Boston Globe) and "a welcome antidote to these frantic times" (Texas Monthly). Despite its humble beginnings, Way Down Low recently debuted #1 on the Billboard Heatseekers chart and has since landed Kat features on NPR's "All Things Considered" and an upcoming taping on Austin City Limits Live. After selling out club shows in New York, Boston, Houston, and Los Angeles, Edmonson hit the road last fall supporting fellow Austin musician Gary Clark Jr. and later, Chris Isaak.

PRESS
"I think she's great. She's got such an authentic, almost old-time jazz quality about her."  - Lyle Lovett

"Kat is a tremendous talent…with a style and charm that reaches fans in the worlds of blues, rock pop and beyond."
- Al Schmitt, nineteen time Grammy winning producer and engineer

"A voice that at times exudes raspy confidence of a veteran soul singer, and at other times recalls the coquettish quality of a silver screen starlet." - AOL Spinner

"Equal parts Billie Holiday and Bjork." - All About Jazz 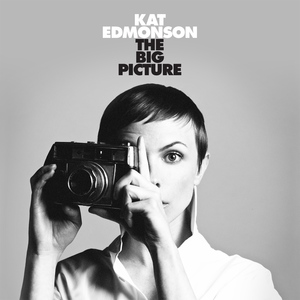 Kat Edmonson announces October tour dates in support of her third album, The Big Picture out September 30 via Sony Music Masterworks. A full tour will follow in early 2015. Edmonson's premiere track "Rainy Day Woman" is available via iTunes HERE and for streaming on SoundCloud HERE.  Check out her new video album trailer HERE. The album is her label debut and was recorded with Grammy-nominated producer Mitchell Froom (Paul McCartney) in his Los Angeles studio. Of the album, Edmonson states, "There's no particular theme, but there are some commonalities, one of which is my ever-underlying influence from motion pictures and film scores. I have always felt that music and film go hand in hand, because that was how I was first exposed to music-from old movies and musicals-and to me there wasn't a separation between an actor acting, dancing and singing." See full tour dates below.