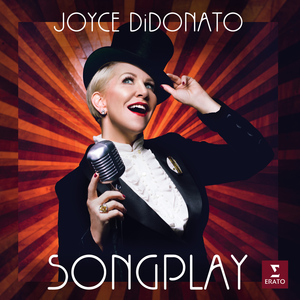 With her album Songplay, Joyce DiDonato takes a new and creative angle on vocal music from the Baroque and Classical periods, as well as from the 20th century. The 14 tracks on Songplay succeed in being simultaneously familiar and unexpected. The album serves up music by Vivaldi in both its customary Baroque purity and swinging to the heady rhythm of a samba. It brings a tango sizzle to an aria by Vivaldi's contemporary Marcello, and it plays with the voice of Bach in George Shearing's ‘Lullaby of Birdland'.

"Songplay, as a title, suggests exactly what this album is," says the pianist Craig Terry, who developed the concept for the album along with Joyce DiDonato.

"We are taking songs that are iconic for people who have studied classical singing and we are trying to reformat them – but in a way that stays true to the original intention of the song." Making an important point, he adds that, "Joyce sings these songs with her own voice – she is not trying to become a jazz singer. Songplay will allow people to hear these songs and their words in a completely different way. Our goal with this album is to show people that a great song is a great song."

At the heart of Songplay are the short, apparently simple songs and arias, mostly written in 18th century Italy, that form the ‘schoolbook' for students of classical singing.  As Joyce DiDonato explains:  "When you are just starting out as a singer, the first score you usually receive is Schirmer's 24 Italian Songs and Arias. These are considered starter pieces, so young singers work at them over and over again, usually growing to resent them deeply, as the difficulty of singing them well as a beginner is overwhelming. I feel, as did Craig, that as a result we've lost the magic of these pieces: they're actually great songs!  And so we began to let our imaginations run wild: we started off by thinking, ‘Maybe this could have a tango feel …'. "Doesn't this actually feel like it needs to be Samba?", etc.  I feel like, happily, we've rediscovered the joy of these Italian art songs."

Part of that rediscovery came from the connection she made between these arie antiche and numbers from the American Songbook. "When my parents were having a martini on a Sunday afternoon (cocktail hour!), my dad would pull out his jazz LPs and I would sing along in full voice with Benny Goodman and his big band … This was music that I deeply loved.

"As Craig and I were playing with the Baroque selection for this album, there was a voice in my head saying, ‘But this song ‘Tu lo sai', composed in the 17th century, expresses the same yearning as Duke Ellington's ‘Solitude', written in 1934. In a sense, they feel like the same song. So, as we were playing with this music, I thought it would be incredible to draw on both these genres – the aria antica and the American popular song – and show that we have essentially been singing the same songs for 400 years. These worlds line up in a truly organic way.  They simply require willing musicians and the desire to tell the stories."

As Joyce admits: "We didn't quite know what Songplay was until we assembled all the players in the studio. Craig and I knew we would rely on the input of these wonderful musicians from other genres to help us find this new sound- world we wanted to create. Everybody was a little anxious, I think, when they arrived, because we didn't really know what was going to develop. But Craig and I trusted the direction we were going in and we trusted the musicians.

"The first day was exhausting, as everyone was trying to understand how this would work. The world of jazz musicians functions very differently from the world of classical musicians. In Jazz, the bass section is King; in Opera the voice is Queen.  But we needed to find a common vision. Within a very short time it became clear that the unifying language was the music and the feel of each unique piece. As we each threw ourselves into the mix, our own sound and approach emerged and took us each by surprise."

Craig Terry takes up the story: "Working on this album was incredible. I don't think any of us knew quite what to expect These wonderful musicians came to collaborate with Joyce and me, bringing their completely different experiences, training, and their amazing imagination. It was inspiring to hear everyone's ideas and put it all together to make something that is better than any of us are by ourselves."

Chuck Israels, who helped assemble the team of jazz musicians for the album, says that: "The title Songplay is now attached in my mind to Joyce and this project. She is being playful – and not irresponsibly playful, but engagingly and creatively playful with music that people have heard in a particular context and in a particular style. She has taken those pieces and demonstrated how they are living things. To me there is a deep value in that. It's been joyful to do this. It's indescribable, the deep acceptance and appreciation of each other as musicians. It's really a joy to know Joyce: not a diva bone in her body – she is a great person."

Joyce DiDonato's distinguished colleagues on Songplay provide some pointers to the album's particular formula and chemistry. They represent an intriguing variety of musical genres:

·       Pianist and harpsichordist Craig Terry, who is Music Director of the Ryan Opera Center at the Lyric Opera of Chicago and whose original idea germinated to become the album;

·       Charlie Porter, an award-winning trumpeter who trained as a classical musician at the Juilliard School under Wynton Marsalis, but who also has blue-chip credentials as a jazz musician and composer;

·       Jimmy Madison, a jazz drummer who has also been associated with Bill Evans and with such luminaries as Lionel Hampton, James Brown, Nina Simone, Carmen McRae,  Chet Baker, Michel Legrand and George Benson;

·       Argentinian bandoneon player Lautaro Greco, a master of tango, whose recordings include a collaboration with the folk-inspired singer Mercedes Sosa.

With a line-up like this – and to misquote Hamlet – "The Songplay's the thing!"