"he flirted with the line, shaped it, wrapped it around his fingers, pulled it out in a new dimension, all with practiced ease."
- ANNE MIDGETTE, WASHINGTON POST

Grammy winning artist Jonah Kim made his solo debut with Wolfgang Sawallisch and the Philadelphia Orchestra in 2003. The same year, he also appeared with the National Symphony Orchestra where the Washington Post music critic Joseph McLellan called him simply, "the next Yo-Yo Ma." Mr. Kim has soloed with the Philadelphia Orchestra, the Philadelphia Chamber Orchestra, National Symphony Orchestra, Atlantic Classical Orchestra, New Philharmonia, Orquestra Sinfônica Nacional, Orchestra Filarmonica, Symphony of the Americas and many others. He has played in prestigious venues such as New York City's Carnegie Hall and Merkin Hall, Wigmore Hall in London, California's Montalvo Arts Center, the Kimmel Center in Philadelphia, the Kravis Center in Palm Beach, the Adrienne Arsht Center in Miami, the Phillips Collection and the John F. Kennedy Center in D.C. where Anne Midgette of the Washington Post praised, "he flirted with the line, shaped it, wrapped it around his fingers, pulled it out in a new dimension, all with practiced ease."

Highly sought after internationally also as a chamber musician, Mr. Kim is a founding member of the "hip, unstuffy, and malleable group" Ensemble San Francisco. He frequents festivals like the Atlantic Music Festival, Bari International Music Festival, Cactus Pear Music Festival, Chamber Music Silicon Valley, Hong Kong Arts Festival, Music in May Santa Cruz, and San Luis Obispo's Festival Mozaic. As a fellow at the Curtis Institute, he formed a piano trio with Joel Link, currently first violinist of the award-winning Dover Quartet, and international piano sensation Yuja Wang. Coached by some of the leading musicians of their day, they explored the piano trio literature extensively. Since then, Mr. Kim has collaborated with world class artists on four continents, sharing the stage with Cho-Liang Lin, Elmar Oliveira, Jon Nakamatsu, Martin Beaver, Chee-Yun Kim and Romie de Guise-Langlois in recent seasons. In a review of his performance at Alliance Français, San Francisco Classical Voice critic David Bratman exclaimed, "this was an excellent performance, the best I've heard of this piece."

Born in Seoul, Korea, Mr. Kim immigrated to the United States in 1995. His father possessed a keen ear for music despite no formal musical training and introduced him to the cello through VHS tapes of Pablo Casals playing the Bach's Solo Cello Suites. Learning by imitation, the seven-year old was awarded a full scholarship to the Juilliard School within the year. So began his professional training at Juilliard, but it was not until he met world renowned soloist and pedagogue Janos Starker the following summer that he became certain music was his calling. Attending a New York City public school, learning to speak English, and adjusting to life in the United States was not always easy. Starker's invitation to come study with him was pivotal, inspiring the young cellist to continue with renewed motivation. Starker later remarked, "Jonah is an exceptional talent. He is at the top of his generation."

Mr. Kim is the recipient of two Grammy Awards and records across a spectrum of genres. He is also active in the community, dedicated to sharing music and reaching out in ways that positively impact and heal people in need, bringing music to veterans, ailing patients and children of low income families. As a teacher, his students have been awarded scholarships to universities and conservatories in the U.S. and Europe. His masterclasses have been described as "captivating and hilarious… relevant to not only musicians, resonating with all walks of life." Between performances, he shares his knowledge with young talent from over 30 countries at Interlochen Center for the Arts Summer Camp.

Mr. Kim plays a Jean-Baptiste Vuillaume cello made in 1845 generously on loan, as well as a 2016 Haide Lin, an award winning instrument at the Indianapolis Violin Society of America Competition. His bows are made by Jules Fétique and Émile Auguste Ouchard.

"Think Lang Lang, think Yuja Wang. Jonah Kim, the 22-year-old cellist who gave a recital at the Kennedy Center's Terrace Theater on Sunday afternoon, is cut from the same cloth. [He] can do pretty much what he wants on a cello. He flirted with the line, shaped it, wrapped it around his fingers, pulled it out in a new dimension, all with practiced ease... He proceeded to offer an ambitious program across a fair spectrum of styles, played with a lot of finesse and a lot of intensity... - Anne Midgette, Washington Post

Master of nuance and dynamics. Their concert gave every evidence of it. I was reminded of the great violinist Mischa Elman, who was known for his stupendous tone... What is very interesting to me is that Kim did not play on his expensive museum-piece cello. He used a replica made only three years ago by the local prize-winning luthier Haide Lin." - Joseph Gold, Piedmont Post

Chee-Yun joined cellist Jonah Kim in the three-movement duo by Zoltan Kodaly from 1914, a work imbued with lively Hungarian rhythms. It was a pleasure to hear such an impeccable match of sound from two players. Every nuance was played the same way, with matching vibrato and precise intonation. For this listener it was a definitive performance. Another standing ovation.
- Roger Emanuels, Monterey Performing Arts

Kim has a thorough command of his instrument, with a large, accurate technique, a highly tense lyrical style, and a willingness to hammer the cello with forceful bowings if need be. By contrast, he played the long lines of the second movement with restraint and a kind of trembling subterranean emotion that was very effective; in the third-movement cadenza [of the Shostakovich cello concerto], Kim showed he could handle its wide range of drama, from near-static introspection to frenzied mania.
- Greg Stepanich, Palm Beach Daily News

"Cellist Jonah Kim [gave] the most vivid and memorable performance of the evening. He is a dominant artist in any context, musically and physically... Kim had the deepest grasp on the work, that he had virtually memorized it even though its pages were in front of him on an iPad. At least his authority conveyed that impression. And, in the last movement, he did something I had never seen or heard before, bowing a glassy passage, without purchase on the strings... The standing ovation was punctuated with shouts of bravo."  Scott MacClelland, Performing Arts Monterey Bay

No more perfect piece could be written to feature the all-embracing warm compassionate quality of the cello. As such, it was a vehicle welcomed by the audience to have an opportunity to revel in the artistry of one of the festival's favorites, Jonah Kim assisted by Ms. Katrine Gislinge. With his broad sweep of sustained melodic richness possible with such a grand cello piece, he gave the audience everything they were looking for and more...violinist Martin Beaver and cellist Jonah Kim were there in full form delighting in playing off each other at every opportunity throughout the performance. - Michael Tierra, Peninsula Performing Arts

The concert began vividly with cellist Jonah Kim and pianist Christine Payne in Debussy's Sonata No. 1 in D minor. This was an excellent performance, the best I've heard of this piece. It was a hard-edged rendition, communicating with pointed clarity. Kim expressed himself through graded levels of passion and in wide varieties of tone, from hard and metallic to gentle recitative... Ravel's Trio for piano and strings received altogether a more conventionally Impressionist performance. Kim played in a more even, controlled style with little open display... The Debussy [was] the highlight of the evening. - David Bratman, San Francisco Classical Voice

The Washington Post praised Kennard's "powerful and involved music making," describing him as "a strong luminous pianist." His 2011 debut album received a rave review in American Record Guide, which pronounced it "a hidden gem," attesting to its "perfect blend of lyricism and romantic passion," "huge romantic sound, and bold melodic vision." It proclaimed that he "plays the dickens out of the Stravinsky [Three Movements from Petrushka]" and "plays Chopin's Preludes with more poise and vision than most pianists who have recorded them." Fanfare affirmed the enthusiastic reception, naming the album "a very desirable disc" and citing "Kennard's mastery of Chopin's idiom," its "impression of complete effortlessness" and "emotional responsiveness." The review characterized his playing as "full of life and sparkle," summing up: "while I wouldn't necessarily say that Kennard outclasses Ashkenazy, Rubinstein, Moravec, Ohlsson…in this repertoire, he surely equals them." 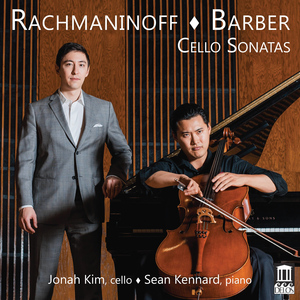 Cellist Jonah Kim and pianist Sean Kennard have been making music together since they were teenagers at the Curtis Institute of Music and together they have played almost every sonata in the standard repertoire. The Rachmaninoff Sonata and the Sonata by Samuel Barber hold a special place for them: The Rachmaninoff was the first sonata they worked on together, and Kim's teacher at Curtis was Orlando Cole, who premiered the Sonata with Barber himself at the piano. Both Sonatas shine as big, romantic works with broad, rhapsodic strokes and soaring melodies. Kim and Kennard give stunning performances, singling out these brilliant young performers as two of the best in their generation.