Jóhann Jóhannsson, born in Iceland in 1969, is an award-winning composer, musician and producer. His work often blends electronics with classical orchestrations and bears the diverse influences of the Baroque, Minimalism and drone-based and electro-acoustic music. Jóhannsson's most recent film soundtrack, for director Denis Villeneuve's thriller Sicario, has attracted Oscar®, BAFTA and Critics' Choice nominations for best original score. In 2015 he won the Golden Globe and received Oscar®, BAFTA, Grammy® and Critics' Choice nominations for his critically acclaimed score for The Theory of Everything, James Marsh's biographical drama based on the life of theoretical physicist Stephen Hawking.

Jóhannsson began studying piano and trombone at the age of eleven in his native Reykjavík. He abandoned formal musical training while at high school, however, frustrated by the constraints imposed on music as an academic subject. After studying literature and languages at university, he spent ten years writing music for and playing in indie rock bands, using guitars to compose feedback-drenched pieces and sculpt complex multi-layered soundscapes. By manipulating the resonances of acoustic instruments with digital processing, Jóhannsson created music that integrated acoustic and electronic sounds into something strikingly individual and new.

His first solo album, Englabörn, was released in 2002 on the British Touch label. Its contents reveal influences spanning everything from Erik Satie, Bernard Herrmann, Purcell and Moondog to electronic music issued by labels such as Mille Plateaux and Mego. Later works include Virðulegu Forsetar (2004), scored for brass ensemble, electronic drones and percussion, and the orchestral albums Fordlândia (2008) and IBM 1401 – A User's Manual(2006), the latter inspired by the sounds of electromagnetic emissions from the first of IBM's pioneering mainframe computers. In 2010 Jóhannsson collaborated with the American avant-garde filmmaker Bill Morrison on The Miners' Hymns, a lyrical and reflective response to Britain's lost industrial past and the heritage of the mining communities of Northeast England. The film's accompanying score, conceived for live performance and also released as a soundtrack album, combines brass band, pipe organ and electronics.

In addition to his scores for Hollywood, Jóhann Jóhannsson has also created soundtracks for several acclaimed works of world cinema and for documentary films, including Lou Ye's Mystery, János Szász's The Notebook and Max Kestner's Dreams in Copenhagen. He recently completed his first short film as director, End of Summer(2015), which charts a slow, hypnotic journey across the austere landscapes of the remote island of South Georgia and the Antarctic Peninsula, its onscreen images accompanied by a haunting soundtrack score. As an orchestral, chamber and theatre composer, he has written works for, among others, the Winnipeg Symphony Orchestra, Bang on a Can, Theatre of Voices, Det Norske Teater and the Icelandic National Theatre.

Jóhann Jóhannsson is currently working on his first studio album in six years – set for release in 2016 to mark his debut on the Deutsche Grammophon label – and is also developing a major new audiovisual piece. 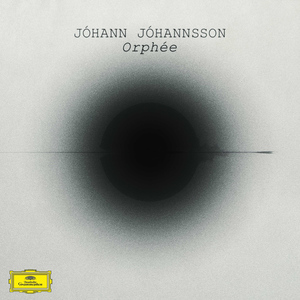 Jóhann Jóhannsson, the Golden Globe-winning, Oscar, BAFTA and Grammy-nominated composer's first album for Deutsche Grammophon, is a meditation on beauty and the process of creation. Orphée traces a path from darkness into light, inspired by the various retellings of the old story of the poet Orpheus, from Ovid's to Jean Cocteau's. A many-layered story about death, rebirth, change and the ephemeral nature of memory, the myth can also be read as a metaphor for artistic creation - about the elusive nature of beauty and its relation to the artist, as well as the idea that art is created through transgression - by the poet defying the gods who forbade him, to turn back towards his beloved as he leaves the Underworld. The new album is set for a September 16th release date on Deutsche Grammophon.