The critical acclaim composer Jimmy Webb has received during his more than forty years of success is as remarkable as the accomplishments they honor: Webb is the only artist to ever receive Grammy awards for music, lyrics, and orchestration, he is a member of the National Academy of Popular Music Songwriter's Hall of Fame, the Nashville Songwriter's Hall of Fame, and, according to BMI, his "By The Time I Get To Phoenix," has been the third most performed song in the last fifty years, with "Up, Up and Away" on the same list in the top thirty. Webb's, "Wichita Lineman" has been listed in MOJO Magazine's worldwide survey of the best one hundred singles of all time in the top fifty, and was singled out in the Oct/Nov 2001 issue of Blender as
"The Greatest Song Ever." Even singer/songwriter James Taylor was nominated for a Grammy this past year for "Best Male Pop Vocal" for his rendition of the song. The National Academy of Songwriters also named Jimmy as 1993's recipient of their Lifetime Achievement Award, although TIME Magazine was early to acknowledge Jimmy Webb's range and proficiency back in 1968 when it referred to his astonishing string of hits, and commented on "Webb's gift for strong, varied rhythms, inventive structures, and rich, sometimes surprising harmonies." In 1999 Jimmy was inducted by actor Michael Douglas into the Oklahoma Hall of Fame as one of the State's most celebrated sons, he was inducted onto the Board of Directors for The Songwriters' Hall of Fame in early 2000, and currently serves on the Board of Directors for ASCAP.

Though best known for the instant classics he provided for such artists as Glen Campbell ("By The Time I Get To Phoenix," "Wichita Lineman," "Galveston," "Where's The Playground, Susie"), Richard Harris ("MacArthur Park," "Didn't We"), the Fifth Dimension ("Up, Up and Away," "This Is Your Life"), The Brooklyn Bridge ("Worst That Could Happen"), Art Garfunkel ("All I Know"), Linda Ronstadt ("Easy For You To Say"), Joe Cocker ("The Moon's A Harsh Mistress") and so on, Jimmy Webb continues to write songs that are as carefully crafted and magical as the earlier ones. Waylon Jennings, Willie Nelson, Johnny Cash, and Kris Kristofferson hit #1 in the late eighties with another Webb standard, "The Highwayman," a ballad which won him yet another Grammy for Best Country Song of the Year, and a CMA Award for Single Of The Year. Linda Ronstadt, who has recorded a multitude of his songs throughout her recording career, included four of his efforts on her double platinum album, "Cry Like A Rainstorm, Howl Like the Wind." With a discography that reads like a "Who's Who" in the music world, Webb's songs continue to grace a multitude of major recording artists' albums, from Tony Bennett and Rosemary Clooney, to Urge Overkill, Reba McEntire,
and Shawn Colvin.

Having five top ten hits within a 20-month period, Jimmy Webb concluded the 1960's with an international name that was bandied around on the musical air currents as a "new genius." Webb began the Seventies intent on launching his own performing career, releasing six albums in eleven years, including Words And Music (1970), And So: On (1971), Land's End (1974), El Mirage (1977), and Angel Heart (1982), while writing hits for other recording stars. Throughout the years, he continued to hone his performance skills, and earned distinguished reviews and praise following his appearances in top cabaret venues (The Algonquin's famed Oak Room in New York, NY's "Feinstein's at The Regency," San Francisco's "Fairmont Hotel," Melbourne's "Continental," "The National Hall" in Dublin, London's, "Ronnie Scott's," and "The Cafe Royal") as he presented material which encompassed a new maturity and sophistication for his first album in over a decade. Suspending Disbelief, (1993) produced by Linda Ronstadt and George Massenburg, received enormous critical acclaim, and led New York Times critic Stephen Holden to state that this album, "may very well be the songwriter's perfect moment." His recording effort, Ten Easy Pieces, (Guardian-EMI)-which won rave reviews-is a collection of the songwriter's hits as he performs them the way they were originally written, and his solo recording, "Twilight of the Renegades," (Sanctuary) was released in 2005. In 2007 Webb released his first live CD, "Live And At Large," which is available through cdBaby and he is currently working on an album with his sons, "The Webb Brothers," as well as beginning preparation for a new Webb solo effort. Webb was also one of the few artists asked to perform in 1995 at Carnegie Hall's "Celebration of American Music" honoring Frank Sinatra, and, at Billy Joel's personal request, one of several artists (including Marvin Hamlisch and Garth Brooks) who performed for Congress in 1997 as Joel was presented with ASCAP's Founder's Award. Jimmy Webb's recent tours (Australia/Japan 2000, The U.K. Tours '05, and Australia and New Zealand, 2005) were sell-outs. His New York performances one along with legendary songwriter Paul Williams- earned the distinguished headline of "A Bright, Soaring Delivery For Wild Romantic Fantasies" from the esteemed New York Times. His three, 2007 performances at New York's famed, "The Cutting Room," were complete sellouts, and he continued to use the venue as his "New York home" throughout 2008.

Over the years Jimmy Webb has also added his inimitable genius to a number of film and television projects. Beginning his scoring career in 1968, he wrote the title song and a midsummer hit ("Montage") for the James Garner-Debbie Reynolds comedy, "How Sweet It Is!," followed by an adventurous score for the 1971 classic Western, "Doc." In 1973 he demonstrated his wit and musical breadth with a score for the provocative "Naked Ape," followed by his music for "Voices," in 1979. Webb provided a dazzling score for the highly successful animated film, "The Last Unicorn," Germany's second-highest grossing film in 1982, which also included his title song, "That's All I've Got To Say," later recorded by Art Garfunkel. That success was followed by the score for Cannon Film's Vietnam sage, "The Hanoi Hilton." Although he rarely collaborates, Webb and Carly Simon wrote the title track of her album, Film Noir and completed "A Dream Worth Keeping," with Alan Silvestri for Twentieth Century's 1992 release, "Fern Gully: The Last Rainforest," recorded by Sheena Easton. His solo effort, "Christmas Will Return" was included in Disney's smash hit, The Santa Clause, with Tim Allen. Jimmy Webb continues in his reign as one of the few masters of American music, leading one reviewer to comment, "There is something of a return to 1930's glamour in Webb's work, a suggestion of the great era of lush film scoring when velvet-sounding violins appeared seemingly out of nowhere and emotion erupted from the music itself."

Webb's earlier television projects included the theme music and songs for specials with Ringo Starr, Olivia Newton-John, and Amy Grant, in addition to providing the theme songs and music for RollingStone Magazine's Tenth Anniversary Special. He has also scored for Steven Spielberg's "Amazing Stories," Shelley Duvall's "Faerie Tale Theatre," MGM Television's "Seven Brides For Seven Brothers," and the television series "E/R." Columbia Records released a Jimmy Webb cantata, "The Animals' Christmas," featuring Amy Grant, Art Garfunkel, and the London Symphony Orchestra, with songs from the album featured on Grant's Christmas Special in 1986. Webb also scored the 1991 premiere episode of HBO's "Tales From The Crypt," as well as another episode of 'Tales for the 1992 season. Webb was also commissioned by Oklahoma Events to compose a 16 minute piece celebrating the State's Centennial, and "Centennial Suite" made its debut in 2007 with the
Oklahoma Philharmonic.

Clarifying himself as a romanticist, Webb's use of vivid imagery simultaneously captures and involves his listeners' emotions, which should come as no surprise to the songwriter who states, "I like words. I like the way they clash around together and bang up against each other, especially in songs." In a progression of his celebrated talent as a lyricist, Webb continued in the 1990's furthering his enormous range of interests by completing a best-selling book, Tunesmith: Inside The Art of Songwriting, a Hyperion 98 release. Released in soft-cover in the fall of '99, "Tunesmith" is still considered by many to be the "Bible of songwriting." Warner's, United Kingdom, released Archive (1993), featuring twenty tracks from earlier Webb recordings and PolyGram U.K. released Someone Left The Cake Out In The Rain, (1998) a compilation of the greatest Webb covers in January, 1998. Raven Records released a combination CD of the Richard Harris/Jimmy Webb recordings from A Tramp Shining and The Yard Went On Forever in their Richard Harris: The Webb Sessions. Jimmy also co-produced Carly Simon's Film Noir album and contributed his vocals, orchestration and piano skills to the project which was filmed for an AMC documentary (which premiered in September of '97). Rhino also released a 5-CD boxed set (limited edition) called "The Moon's A Harsh Mistress," which was an instant sell-out, and Warner, U.K. followed with "Archive & Live," a 2-CD set in 2005. Webb also co-produced Carly Simon's latest CD, "This Kind of Love," for Starbuck's "Hear Music (2008).Jimmy's recording efforts with Glen Campbell have been reissued and extended on a Raven-import album entitled Reunited (2000), and his week-long performances with Glen at New York's "Feinstein's At The Regency" in June 2005 were sold out. In September of this year (2009) Jimmy and Glen will reteam with the Nashville Symphony for three nights of concerts in a special series.

Jimmy Webb's accomplishments as a composer, arranger, and producer demonstrate beyond question that he remains as important and vital a cultural figure today as he was over thirty years ago. Embraced by his peers, Webb has influenced and affected some of the finest musical talents of our time. Frank Sinatra declared "By The Time I Get To Phoenix" as "the greatest torch song ever written," and said he enjoyed singing Jimmy Webb tunes because "he has been blessed with the emotions and artistic talent of the great lyricists." The late Sammy Cahn commented, "I think one of the real, real geniuses is Jimmy Webb. His "MacArthur Park" is a major piece of work, major. I'd almost compare it to Gershwin's "Rhapsody in Blue" in size and scope." Michael Feinstein, who recorded Webb's "Time Enough For Love," for his 1993 album, Forever, and included another Webb track ("Wasn't There A Moment") on his Such Sweet Sorrow, says he's "interested in the work of the great masters from any era, and certainly, Jimmy Webb is a master of this era, of today." Feinstein also recorded an "all-Webb" album for 2002 and premiered the track, "These Are All Mine" at Carnegie Hall with Jimmy as his special guest in April, '01. Billy Joel credits Jimmy as a major influence on his own foray into the music business. "When I was starting out as a songwriter," says Joel, "I looked to Jimmy Webb as one of the most innovative and musically proficient songwriters of our generation." His songs transcend their precedent-setting critical and commercial acclaim to achieve the level of true classics a permanent part of the American musical landscape, the soundtrack of an era. In his book about songwriting, Webb states, "the paramount joy of the craft is that, however simply it is begun, it can take the songwriter on a lifelong voyage across many distant and wondrous musical seas." For Jimmy Webb, that's a spectacular series of events indeed.

Just Across The River 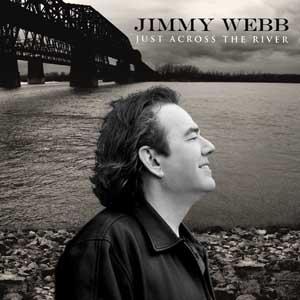 Just Across The River, on E1 Music, the new album from multiple Grammy award-winner Jimmy Webb, one of the most celebrated composers and songwriters in American music history. The album features interpretations of the classic songs that made him a vital cultural icon including "By The Time I Get To Phoenix," "Wichita Lineman," "Galveston," "The Highwayman," "Oklahoma Nights" and more. The album features guest appearances from Webb's friends, fans and recording partners including Jackson Browne, Glen Campbell, Vince Gill, Billy Joel, Mark Knopfler, Michael McDonald, Willie Nelson, Linda Ronstadt, J.D. Souther and Lucinda Williams.

Just Across The River
http://www.jimmywebb.com