Violinist Jennifer Koh is recognized for her intense, commanding performances, delivered with dazzling virtuosity and technical assurance. With an impassioned musical curiosity, she is forging an artistic path of her own devising, choosing works that both inspire and challenge. She is dedicated to performing the violin repertoire of all eras from traditional to contemporary, believing that the past and present form a continuum. She is also committed to exploring connections in the works she performs, searching for similarities of voice among diverse composers and associations within the works of a single composer. For her forward-thinking approach to classical music, presenting a broad and eclectic range of repertoire and fostering multidisciplinary collaborations with artists of all types and styles, Ms. Koh has been named Musical America's 2016 Instrumentalist of the Year.

During the 2015-16 season, Ms. Koh partners with pianist Shai Wosner for Bridge to Beethoven, a recital series that explores the impact Beethoven has had on a culturally diverse group of composers and musicians. The four-recital series pairs Beethoven's Complete Violin Sonatas with contemporary works including three commissions for the series by Vijay Iyer, Andrew Norman, and Anthony Cheung, which serve as companion pieces to select sonatas, as well as Jörg Widmann's Sommersonate. All four Bridge to Beethoven recitals will be presented at the 92nd Street Y in New York and at the Herbst Hall in San Francisco by SF Performances where Ms. Koh serves as Artist-in-Residence this season. Select recitals will also be presented in Boston, Chicago, Los Angeles, Santa Barbara, and other cities nationwide. As an added component, Ms. Koh and Mr. Wosner are offering masterclasses on the Beethoven Sonatas, and Ms. Koh is participating in lectures and symposia in connection with the Bridge to Beethoven series at Harvard, Duke University, and Stanford. The new works for Bridge to Beethoven are co-commissioned by SF Performances and MusicBridge, Inc, a non-profit organization Ms. Koh founded in 2013 to foster and promote collaborations between artists of diverse disciplines and styles. MusicBridge provides leadership and support for innovative music and artistic commissions, educational initiatives, and professional development of classical musicians. MusicBridge exists to build a community of artists working together to expand appreciation for classical music performances and artistry.

The exploration of Bach's music and its influence in today's musical landscape has played an important role in Ms. Koh's artistic journey, and her interpretations of Bach's works for solo violin, both in marathon recitals – a feat long considered the ultimate test of a violinist's command of her instrument – and paired with contemporary pieces, have been praised as thoughtful, intense, energetic and beautifully phrased. To commemorate the 325th anniversary of Bach's birth in 2009, Ms. Koh debuted Bach and Beyond, a three-part series of recital programs that explore the history of the solo violin repertoire from Bach's Six Sonatas and Partitas to modern-day composers and new commissions. The series paired the Sonatas and Partitas with works by Bartók, Berio, Carter, John Harbison, Phil Kline, Kaija Saariaho, Esa-Pekka Salonen, Ysaÿe, and John Zorn. Ms. Koh's performance of Mr. Salonen's work also included a interpretation of the piece in a video commission by filmmaker Tal Rosner. Ms. Koh's Bach and Beyond series is being released on three CDs by the Cedille label. The first recording, released in October 2012,includes Bach's second and third Partitas, Missy Mazzoli's Dissolve O My Heart, Saariaho's Nocturne for Violin and Ysaÿe's Sonata No. 2. Bach and Beyond Part 2, released in May 2015, features Bach's Sonata No. 1 and Partita No. 1, Bartók's Sonata for solo violin and the world-premiere recording of Kaija Saariaho's Frises for solo violin and electronics.

Ms. Koh spearheaded another project in 2012 titled Two x Four, celebrating the relationship between teacher and student through music. Named for two violinists and four works, Ms. Koh and Jaime Laredo, her mentor and former teacher at the Curtis Institute of Music, performed works for two violins and orchestra including Bach's Double Concerto for Two Violins, Philip Glass's Echorus, Anna Clyne's Prince of Clouds and David Ludwig's Seasons Lost, the latter of the two being commissioned and premiered as part of the project. The project culminated with a recording of Two x Four with the Curtis 20/21 Ensemble, released by Cedille in April 2014.

From 2012-2014, Ms. Koh played the solo violin role of Einstein in Robert Wilson and Philip Glass's new production of Einstein on the Beach, with performances worldwide, in celebration of Mr. Glass's 75th birthday. The production was the first restaging of the original 1976 version since 1992 with the original creators. In 2018, Ms. Koh will present a recital, staged by Mr. Wilson, of Bach's complete Sonatas and Partitas for solo violin.

Ms. Koh is passionate in her efforts to expand the violin repertoire and has established relationships with many of today's composers, regularly commissioning and premiering new works. In addition to premiering works by the composers featured in her Bridge to Beethoven project this season, she also performs the world premieres of two works by Frederic Rzewski at the Library of Congress and Philips Collection in Washington, DC.  Ms. Koh has performed world and U.S. premieres as part of her Bach and Beyond and Two x Four projects, and by composers ranging from Jennifer Higdon, Magnus Lindberg, Steve Mackey, Kaija Saariaho, Sean Shepherd, Augusta Read Thomas, Charles Wuorinen and John Zorn among others.

Ms. Koh brings the same sense of adventure and brilliant musicianship to her recordings as she does to her live performances. Her recently released Bach and Beyond Part 2 is her tenth recording released on the Chicago-based Cedille label. Her other albums on Cedille include the aforementioned Bach and Beyond Part I, named one of the best recordings of 2012 by the New York Times and Two x Four, as well as Signs, Games & Messages, featuring works by Kurtág, Janáček, and Bartók performed with pianist Shai Wosner;Rhapsodic Musings: 21st Century Works for Solo Violin; a Grammy-nominated recording String Poetic, which features the world premiere of Jennifer Higdon's work for which the album is named, as well as works by John Adams, Lou Harrison and Carl Ruggles, performed with pianist Reiko Uchida; a CD devoted to the complete Schumann violin sonatas; Portraits, a disc featuring the Martinů and Szymanowski violin concertos recorded with the Grant Park Orchestra under conductor Carlos Kalmar; an album titled Violin Fantasiescomprising fantasies for violin and piano by Schoenberg, Schumann and jazz saxophonist Ornette Coleman; and a program centered on Bach's Chaconne that includes solo chaconnes by turn of the century contemporaries Richard Barth and Max Reger. Ms. Koh is also the featured soloist on a recording of Ms. Higdon's The Singing Rooms with the Atlanta Symphony Orchestra led by Robert Spano for Telarc.

In May 2014, Ms. Koh launched Off Stage On Record, a video series of short, documentary-style episodes aimed to entertain and inform students, artists, and fans alike. Ms. Koh goes on record to discuss what preparations a concert artist must take into consideration before performing onstage. The episodes-"Creativity," "Collaboration" and "Body"-can be viewed on Ms. Koh's YouTube channel (www.youtube.com/jenniferkohviolin).

A committed educator, Ms. Koh has won high praise for her performances in classrooms around the country under her innovative "Music Messenger" outreach program. "The majority of children in this country have not been given an opportunity to learn music as a form of self expression," Ms. Koh asserts, "and I want to share the experience of creating and listening to music with them." Her outreach efforts have taken her to classrooms all over the country to perform for thousands of students who have little opportunity to hear classical music in their daily lives. "Music is a visceral experience which can create a positive outlet for emotions and a place for inner expression that is more compelling than time spent in front of the television or at a mall," she adds. Ms. Koh is a member of the Board of Directors of the National Foundation for the Advancement for the Arts, a scholarship program for high school students in the arts.

Born in Chicago of Korean parents, Ms. Koh began playing the violin by chance, choosing the instrument in a Suzuki-method program only because spaces for cello and piano had been filled. She made her debut with the Chicago Symphony Orchestra at age 11. In a shift of disciplines, Ms. Koh earned her Bachelor of Arts degree in English literature from Oberlin College before studying at the Curtis Institute, where she worked extensively with Jaime Laredo and Felix Galimir. Ms. Koh is on the string faculty of New York University's Steinhardt School of Culture, Education and Human Development. 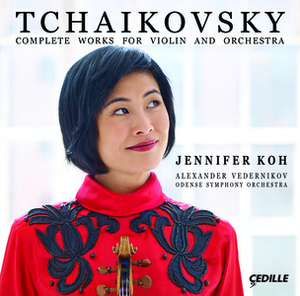 Jennifer Koh, Musical America's 2016 Instrumentalist of the Year, headlines an album of Tchaikovsky's complete works for violin and orchestra. It's the "remarkable . . . thoughtful and vibrant" (Strings Magazine) American violinist's first recording of music by Tchaikovsky, who has figured prominently in her rise to the top ranks of violinists worldwide. Tchaikovsky's Concerto in D Major is one of the most celebrated and daunting works in the violin repertoire. The subdued Sérénade mélancolique illustrates the composer's ear for orchestral color. The delicate Valse-Scherzo melds old-fashioned elegance with spirited playfulness. Souvenir d'un lieu cher's poignant, nostalgic mood gives way to a delightful finale. Koh shared the top prize in the 1994 Tchaikovsky International Competition in Moscow, where she played the Tchaikovsky (and Brahms) concerto and won three special prizes, including for the best performance of Tchaikovsky's work.