"[a] spirited and expressive guitarist" – The New Yorker

"among the elite of today's classical guitarists" –Gramophone

Jason Vieaux, "among the elite of today's classical guitarists" (Gramophone), is the classical guitarist that goes beyond the classical. He has earned a reputation for putting his expressive gifts and virtuosity at the service of a remarkably wide range of music, and his schedule of recital, concerto, chamber music, teaching and recording commitments is distinguished with return engagements throughout the U.S. and abroad.

Vieaux's solo recitals have been a feature at every major guitar series in North America, as well as many of the important guitar festivals in Asia, Australia, Europe, and Mexico. Recent and future highlights include returns to the Caramoor Festival, Philadelphia Chamber Music Society, and New York's 92nd Street Y. Vieaux's appearances for Chamber Music Society of Lincoln Center, Music@Menlo, Strings Music Festival, Grand Teton, and many others have forged his reputation as a first-rate chamber musician and programmer. He collaborates in recitals this season with Escher Quartet, acclaimed harpist Yolanda Kondonassis, and accordion/bandoneón virtuoso Julien Labro. Vieaux's passion for new music has fostered premieres of works by Dan Visconti, David Ludwig, Jerod Tate, Eric Sessler, José Luis Merlin and Gary Schocker.

Vieaux continues to bring important repertoire alive in the recording studio as well. His next album, PLAY, a selection of audience favorites celebrating Vieaux's 20 years of professional touring, will be released in January 2014 on Azica Records. Among his previous eleven commercial albums is an Azica disc of Astor Piazzolla's music with Julien Labro and A Far Cry Chamber Orchestra. Bach: Works for Lute, Vol.1 hit No. 13 on Billboard's Classical Chart after its first week and received rave reviews by Gramophone, The Absolute Sound, and Soundboard. Images of Metheny features music by American jazz legend Pat Metheny, who, after hearing this landmark recording, declared: "I am flattered to be included in Jason's musical world." Sevilla: The Music of Isaac Albeniz made several Top Ten lists the year of its release. Vieaux's albums and live performances are regularly heard on radio and internet around the world, and his work is the subject of feature articles in print and online around the world, including such magazines as Acoustic Guitar, MUSO, Gramophone, and on NPR's "Deceptive Cadence."

In 2012, the Jason Vieaux School of Classical Guitar was launched with ArtistWorks Inc., an unprecedented technological interface that provides one-on-one online study with Vieaux for guitar students around the world. In 2011, he co-founded the guitar department at The Curtis Institute of Music, and he has taught at the Cleveland Institute of Music since 2001.

Vieaux is a member of the Advisory Board of the Guitar Foundation of America, and is affiliated with Philadelphia's Astral Artists. His primary teachers were Jeremy Sparks and John Holmquist. In 1992 he was awarded the prestigious GFA International Guitar Competition First Prize, the event's youngest winner ever. He is also honored with a Naumburg Foundation top prize, a Cleveland Institute of Music Alumni Achievement Award, and a Salon di Virtuosi Career Grant. In 1995, Vieaux was an Artistic Ambassador of the U.S. to Southeast Asia.

…among the elite of today's classical guitarists." Gramophone

"Vieaux can stretch a chord like taffy, while letting each component note sparkle…There was such melancholy in Vieaux's playing [2nd movement]...As for the cadenza, it was fleet and prismatic in the hands of Vieaux, whose fingers rained color and clarity." - San Jose Mercury News

"...Few guitarists stray far from the Bach lute suites, represented here by the Suite in E minor that ended Vieaux's program, his slim, fat-free, forthright sound being a clear vehicle for his artistic intentions. His playing has conceptual solidity with his tempo relationships. Instead of constantly beautifying the musical surfaces, he uses vibrato and color for interpretive points when most demanded, and with particularly arresting effect, in part because your ears don't take them for granted." - The Philadelphia Inquirer

"Kondonassis and Vieaux deserve to be termed magicians for the way they shaped phrases with natural fluidity, grace and, when required, fiery drama. " - The Cleveland Plain Dealer

"...one of America's premier guitarists...Notes shone with different weights and hues; melodies were alive and recalled the nuanced beauty of light reflecting off a string of pearls...Vieaux's performance spun magic. Rarely has a single instrument so clearly painted such cinematic vistas and searching introspection."  - Fort-Worth Star-Telegram

"Vieaux gave the Prelude, Fugue and Allegro (BWV 998) a stately, sharply articulated and subtly driven reading, in which the closing Allegro gradually took on the exciting qualities of a perpetual-motion piece."  - New York Times

"Vieaux opened ears with his rhythmic clarity and remarkable left-hand facility....He made the single guitar seem like a body of instruments at work in music full of the emotion of loss." - The Philadelphia Inquirer

"Jason Vieaux [was] nimble-fingered in a Vivaldi Concerto that was remarkable for its variety of colors." - Boston Globe

"Vieaux showed why he is among the most talented guitarists of his generation, a player whose effortless technique and fluidity gave the concerto a singing voice."  - Tampa Tribune

"Vieaux was first-class. One movement on Ponce's concierto del sur made me want to hear more of his work, such was the range of sounds he drew from his instrument."  - New Zealand Herald

"Vieaux's talent is so huge, and has been apparent for so long... He is still the most accomplished guitarist I have heard with my own ears, and that's a list that starts with Segovia." - Absolute Sound

"I have never heard anyone with Vieaux 's subtlety. Vieaux 's articulation is faultless and more importantly, it is endlessly varied. Sitting there stolid and placid, he radiates concentration. He plays

melodies and accompaniments simultaneously, immediately distinguishable from each other. His playing is clear without being dry. And he has a tremendous dynamic range. Just to hear him play something simple, like a scale, is a delight"  - The Buffalo News 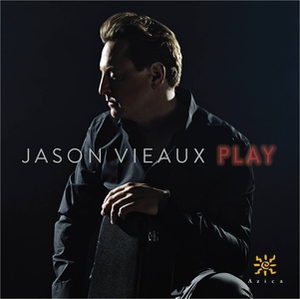 Guitar virtuoso Jason Vieaux will release his next solo album, Play, worldwide on Azica Records on January 28, 2014. The album celebrates Jason Vieaux's 20th anniversary as a performer by featuring the Spanish, Mexican, South American, Cuban, French, and American classics that Vieaux has found to be universal audience favorites over the past two decades. The music includes showpieces by Barrios, Sagreras, Bustamante, and Sainz De La Maza, Tárrega's classics Recuerdos de la Alhambra and Capricho Arabe, and Vieaux's own in-demand arrangement of Duke Ellington's In A Sentimental Mood and Andrew York's popular Sunburst.