Sir James Galway is regarded as both the supreme interpreter of the classical flute repertoire and a consummate entertainer whose appeal crosses all
musical boundaries.

As one of the most recorded classical artists performing today, Sir James has made himself a legend, a modern musical master whose virtuosity on the flute is equaled only by his limitless ambitions and vision. Through his extensive touring, over 30 million albums sold and his frequent international television appearances, Sir James has endeared himself to millions worldwide. As an instructor and humanitarian, Sir James is a tireless promoter of the arts.

As he approaches his 70th birthday, Sir James continues to look for new and innovative approaches to music and to life. For O'Reilly Street, his first recording for the Sony Classical label, scheduled for release on September 16th, Galway will record music from the jazz suites of Claude Bolling with the addition of Afro Cuban percussion. Collaborating with him on this new album is two-time Grammy nominated Cuban music group, Tiempo Libre, known for its sizzling timba music. The recording is rich in the traditions of multiple genres, authentic yet emotionally seductive, and woven with threads of classical,
jazz and Cuban music.

Recently, Sir James, his wife renowned flutist Lady Jeanne Galway and harpist Catrin Finch transported listeners on a journey through the works of Wolfgang Amadeus Mozart on his September, 2006 album My Magic Flute. He continues to delight fans through

the RCA Red Seal album The Essential James Galway (May, 2006) featuring selections ranging from Peer Gynt and Concertino for Flute and Piano, Op. 107, to The Girl from Ipanema and Riverdance. Other recent albums include Ich war ein Berliner: James Galway and the Berlin Philharmonic and Wings of Song, as well as his performances on the soundtrack to The Lord of the Rings: Return of the King. A discography of over 60 CD's with BMG Sony Classics reflects his mastery
of musical diversity.

Sir James will perform and host the New York Philharmonic's September 17th concert which will be a PBS special, "Live from Lincoln Center." Other U.S. highlights of this season include performances with the Austin Symphony Orchestra, the Long Island Philharmonic, the Nashville Symphony, the York Symphony and the Spokane Symphony. Joined in recital, Sir James and Lady Jeanne Galway will delight audiences in American cities ranging from Houston, TX, to Mesa, AZ and
Waterloo, ON.

His 2008-2009 international concert calendar will have him zig- zagging the globe with stops in France, the Czech Republic, Italy, Spain and Switzerland. He will perform in recital with Lady Jeanne Galway at the CRR Concert Hall in Istanbul, Tukey; the King's Lynn Festival in Norfolk, G.B.; the Schubertiade Classical Music Festival in Roskilde, Denmark, and at the National Concert Hall in Dublin, Ireland. Sir James will tour with the Israel Camerata Orchestra with concerts in such cities as Madrid, Spain, Luzern, Switzerland, as well as Jerusalem and Tel Aviv, Israel.

Belfast born, Sir James went on to study in London and Paris before embarking on his orchestral career in such prestigious orchestras as the Sadlers Wells and Royal Covent Garden Operas, The BBC, Royal Philharmonic and London Symphonies, before taking up the coveted position of solo flautist with the Berlin Philharmonic under Herbert Von Karajan.

Since 1975, when Sir James launched his solo career, he has continuously performed with the world's leading orchestras and conductors, participated in chamber music engagements, popular music concerts and given master classes. From Galways' lips have come definitive treatments of classical repertoire and masterworks by Bach, Vivaldi, and Mozart. He also features contemporary music in his programs, including new flute works commissioned by him and for him by composers such as Amram, Bolcom, Corigliano, Heath and Lieberman. Taking up the baton, and in addition to numerous play/conduct engagements he holds the illustrious position of Principal Guest Conductor of the London Mozart Players.

Alongside his busy performing schedule he finds time to share his wisdom and experience with the generations of tomorrow by conducting annual master classes, commissioning new works for the flute, publishing articles, books and
flute studies. His website www.thegalwaynetwork.com is devoted to all students, educators and flute
lovers worldwide.

Sir James devotes much of his free time supporting charitable organizations such as SOS, FARA, Future Talent, Swiss Artistic Foundation, The Caron Keating Foundation and UNICEF, with which he holds the title of special representative.

Sir James continues to be honored for his accomplishments. He was inducted in the Hollywood Bow Hall of Fame in June 2008 and was the recipient of the 2008 UMS Distinguished Artist Award at the 13th Annual Ford Honors Program. Irish America Magazine also awarded Sir James and Lady Jeanne Galway the "2008 Spirit of Ireland" award recognizing them for their roles as musical ambassadors.

Sir James was named the 1997 Musician of the Year by Musical America and has received Record of the Year awards from Billboard and Cash Box magazines, as well as the Grand Prix du Disque for his recordings of the Mozart Concerti. His 60th birthday was commemorated with 1999's Sixty Years, a 15-CD retrospective of his works for the RCA Victor Red Seal label.

Her Majesty Queen Elizabeth II of England has honored him twice: in 1979 with an Order of the British Empire and in 2001 with a Knighthood for services to music. In 2004, Sir James was given the President's Merit Award from the Recording Academy at the Grammy's 8th Annual "Salute to Classical Music." He has also been honored at the prestigious Classic Brits Awards held in London's Royal Albert Hall in 2005, where he received the coveted "Outstanding Contribution to Classical Music" award in celebration of his 30 years as one of the top Classical Musicians of our time.

Celebrating 70: A Collection of Personal Favorites 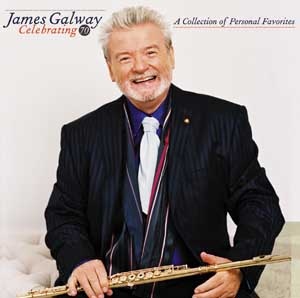 In celebration of his 70th birthday, Sir James Galway selects for his fans a collection of his favorite songs - all on one CD for the first time. Consisting of 19 tracks and over 70 minutes of music, Celebrating 70: A Collection of Personal Favorites spans the illustrious career of the beloved flutist and represents his entire catalogue. This new collection is a fitting tribute to an extraordinary musician who has recorded dozens of albums and sold over 30 million units worldwide. Galway is internationally regarded as both a matchless interpreter of the classical repertoire and a consummate entertainer whose charismatic appeal crosses all musical boundaries. His unique sound and superb musicianship have made him one of the most respected and sought-after performing artists of our time.

Celebrating 70: A Collection of Personal Favorites