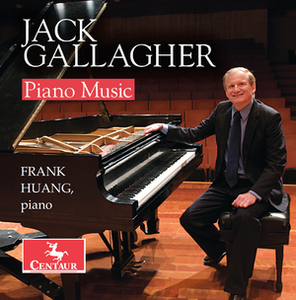 Composer Jack Gallagher's newest release of solo piano music performed by Juilliard graduate Frank Huang includes numerous works, often dedicated to his wife or daughter, composed across a 40-year span. Gallagher's Sonatina aspires to unabashed geniality, its middle movement the original piano incarnation of his Berceuse for orchestra, itself widely broadcast by national and regional media. The engaging Six Pieces for Kelly was composed for his daughter when she was eight years old. Pastorale and Happy Birthday, April were written as birthday presents for his wife. The Six Bagatelles are short, brisk, colorful pieces. More rigorous are the technically-challenging Sonata for Piano, opening the program, and Malambo Nouveau, an animated encore piece. Pianist Huang, acclaimed for his "tremendous flair and a sense of the Romantic virtuoso style" (New York Concert Review), deftly and vibrantly captures the soul and spirit of each work.

The nine works on this disc, composed and revised between 1971 and 2014, reflect my love for and interest in the piano throughout my compositional life. Four were written for, or dedicated to, my wife April, a long-time teacher of young piano students.

Though not my primary instrument, the piano has been a close companion throughout my career; my first musical studies were on a keyboard instrument (the accordion). The tactile quality of the piano always seemed to me reassuring, encouraging a desire to compose works that "lie under the hands" congenially and idiomatically, even if informed by a non-virtuoso's understanding of the medium. Perhaps this helps explain why the ethos and technical means of these works attempt to convey an essential affability.

Sonata for Piano (1973), dedicated to my wife and completed on her birthday in 1973, received its first performance in April of that year by pianist Lawrence Schubert at Cornell University in Ithaca, New York. The work, cyclically structured, is in three movements of straightforward formal design and musical discourse.

The first movement Allegro vivo, in sonata form, begins with a declamatory opening subject elaborated contrapuntally before giving way to the more homophonic second subject. The two themes are combined contrapuntally in the development.

The second movement Andante, in three-part form and lyrical throughout, recalls climactically at its close the principal subject of the first movement.

The third movement Allegro energico, in sonata-rondo form, contrasts rapid alternating octaves with a lyrical second theme. All thematic material is derived from the principal subject of the first movement.

Revised in 2005 and 2008, the Sonata has been performed by Lawrence Schubert at Carnegie Recital Hall and the Library and Museum of the Performing Arts at Lincoln Center, New York, Brian Israel at Cornell University, and Douglas Huston at The College of Wooster, Ohio. Bradford Gowen, in The Piano Quarterly, found the work "an exuberant, tuneful and virtuosic three-movement sonata (with) excitement generated in the finale through alternating octaves and changing meters."

Evening Music, completed in 1998 (revised 2008), is published by Editions Bim, Vuarmarens, Switzerland. First performed by pianist Laura Silverman at The College of Wooster in April 2008, its material is the basis of the second movement of the earlier Exotic Dances for violin and piano, first performed in 1996 by violinist Thomas Wood and pianist Brian Dykstra.

Sonatina for piano (1976; rev. 2009), dedicated to my parents and diminutive more in duration than difficulty, aspires to an unabashed geniality.

The second movement Andante cantabile began as a lullaby composed to celebrate the birth in 1976 of Lia Rogers, the daughter of friends. Subsequently expanded for use in the sonatina, it serves also as the second of the Six Bagatelles. Later orchestrated, retitled "Berceuse," and published by Ludwig Masters Music, it was recorded by the London Symphony Orchestra conducted by JoAnn Falletta for Naxos and the Polish Radio Orchestra of Krakow conducted by Szymon Kawalla for Vienna Modern Masters. Airplay of the orchestral version has included more than 160 broadcasts over Colorado Public Radio and more than 50 broadcasts over Radio Stephansdom FM 107.3 in Vienna, Austria. It is used here by permission of Ludwig Masters Music.

The third movement Vivo is a lively first rondo with coda.

Nocturne, in three-part form, was completed in 1976. Revised in 2003 and in 2010, it seeks to evoke reminiscences of the lyrical Romanticism found in nocturnes of Chopin and John Field. To this end, a simple cantilena becomes increasingly ornate, subject to elaboration, imitation and a climactic denouement, marked Appassionato. An extended cadenza precedes the reappearance of the principal section. The Nocturne and Sonatina were first performed by pianist Lawrence Schubert at Carnegie Recital Hall and at The College of Wooster in January and February 1978. The Nocturne, dedicated to my wife, was recorded in an earlier version for Capstone Records by pianist Jeri-Mae Astolfi in 2007.

Six Bagatelles, completed in 1979 and published by Editions Bim, was first performed by the composer for the Bellville, OH, Music Club. The first, Allegro vivace, dedicated to Irwin Winkler, a friend since childhood, is in the manner of a brisk Hungarian folk dance. No. 2, dedicated to Lia Schubert Rogers, is identical to the Berceuse on track 6 of the present recording, as noted above; to limit the present disc to 80 minutes, it is not included again as a separate track on this recording. No. 3, Capriccietta, playful and brief, is dedicated to my late friend and colleague David Janower, longtime Music Director of the Albany Pro Musica in New York. No. 4, Canzone Semplice, is dedicated to pianist Coren Estrin Mino. No. 5, Arietta, is a wistful andantino dedicated to my colleague Nancy Garlick. No. 6, Rondino, is dedicated to pianist Amy Breneman, who presented the first complete public performance of the Bagatelles at The College of Wooster in May 1980.

Pastorale, composed in 1979 for my wife's birthday, was published by Editions Bim as part of Three Short Waltzes (not recorded here) and Pastorale. It pays modest homage to Maurice Ravel's exquisite Minuet from Le Tombeau de Couperin.

Six Pieces for Kelly, completed in 1989 and dedicated to my daughter when she was eight years old, is published by Manduca Music Publishing, Portland, Maine and designed for young performers. The titles are March, Lullaby, Piping Song, Chanson d'Insouciance, Folk Song and Balkan Dance.

Malambo Nouveau began as a brief encore commissioned in 2000 by composer-keyboardist Carson Cooman. Originally titled "Malambo," it was greatly expanded and retitled Malambo Nouveau in 2009. In this form it was dedicated to, and first performed by, pianist Angelin Chang for the Steinway Society of Western Pennsylvania in Pittsburgh, Pennsylvania in September 2009.

Happy Birthday, April, composed in January 1976 as a present to my wife, was notated originally as a sketch partly in lead-sheet format. It was fleshed-out in 2014 for this recording.