Itzhak Perlman
Undeniably the reigning virtuoso of the violin, Itzhak Perlman enjoys superstar status rarely afforded a classical musician. Beloved for his charm and humanity as well as his talent, he is treasured by audiences throughout the world who respond not only to his remarkable artistry, but also to the irrepressible joy of making music, which he communicates. In January 2009, Mr. Perlman was honored to take part in the Inauguration of President Barack Obama, premiering a piece written for the occasion by John Williams and performing with clarinetist Anthony McGill, pianist Gabriela Montero, and cellist Yo-Yo Ma. In December 2003 the John F. Kennedy Center for the Performing Arts granted Mr. Perlman a Kennedy Center Honor celebrating his distinguished achievements and contributions to the cultural and educational life of our nation. In May 2007, he performed at the State Dinner for Her Majesty The Queen and His Royal Highness The Duke of Edinburgh, hosted by President George W. Bush and Mrs. Bush at the White House.

Mr. Perlman's 2011-12 season will take his performances as soloist to both new and familiar major centers throughout the world. In fall of 2011, he joins the San Francisco Symphony at Davies Hall under Music Director Michael Tilson Thomas in a gala concert to open their centennial season, and returns to the same orchestra in April 2012 on a play/conduct program. In October 2011, Mr. Perlman will travel to Asia for recitals in China, Hong Kong, Taiwan and Macau with pianist and frequent collaborator, Rohan De Silva. Other highlights of his 2011-12 season include the gala opening of the new Kaufman Center in Kansas City, Missouri with the Kansas City Symphony, a play/conduct performance with the Los Angeles Philharmonic at the Hollywood Bowl, and recitals across North America including Philadelphia, Los Angeles, Las Vegas, San Diego and Washington, DC. Mr. Perlman also appears with students and alumni from the Perlman Music Program at the Arsht Center in Miami, Florida and Koerner Hall in
Toronto, Ontario.

In addition to his many orchestral and recital appearances throughout the world, Mr. Perlman performs as conductor with leading orchestras. He was Music Advisor of the St. Louis Symphony from 2002 to 2004, and he was Principal Guest Conductor of the Detroit Symphony from 2001 to 2005. He has performed as conductor with the New York Philharmonic, Chicago Symphony, Philadelphia Orchestra, Boston Symphony, National Symphony, Los Angeles Philharmonic, St. Paul Chamber Orchestra, and the symphony orchestras of San Francisco, Dallas, Houston, Pittsburgh, Seattle, Montreal, Atlanta and Toronto, as well as at the Ravinia and OK Mozart festivals. Internationally, Mr. Perlman has conducted the Berlin Philharmonic, Concertgebouw Orchestra, London Philharmonic, the English Chamber Orchestra, and
the Israel Philharmonic.

He proudly possesses four Emmy Awards and fifteen Grammy awards. He performed at the 2006 Academy Awards and at the Juilliard School Centennial gala, broadcast nationally on Live from Lincoln Center. One of Mr. Perlman's proudest achievements is his collaboration with film score composer John Williams in Steven Spielberg's Academy Award winning film Schindler's List, in which he performed the violin solos.

Mr. Perlman devotes considerable time to education, both in his participation each summer in the Perlman Music Program and his teaching at the Juilliard School, where he holds the Dorothy Richard Starling Foundation Chair. He was awarded an honorary doctorate and a centennial medal on the occasion of Julliard's 100th commencement ceremony in May 2005.

Cantor Helfgot
Cantor Yitzchok Meir Helfgot was born in Tel Aviv, Israel. From the tender age of five, after hearing Moshe Koussevitzky's recording of "Akavia Ben Mahalalel," Yitzchok Meir knew what his life's calling would be. At just eight years old, Cantor Helfgot recorded his first works, and then spent much of his childhood and teenage years studying voice and nussach
(the art of prayer).

Cantor Helfgot held his first concert at twenty-three years old, performing three great works-Zibert's "Mimkomcha," Kwartin's "Tiher Rabbi Yishmael" and Rosenblatt's "Ad Hena"-all of which were masterfully executed and admired by those in attendance. It was at this point that the world began to realize the divine gift in Cantor Helfgot, taking us back to the Golden Age of Rosenblatt, Koussevitzky, Kwartin, Sirota and Hershman.

Truly living up to his name, Helfgot (literally translated as someone who helps God) rouses all who hear his golden voice to
new spiritual heights.

Leading the way in today's revival of liturgical music, Cantor Helfgot has performed in concerts spanning six continents, where time after time he has left audiences spellbound. From New York to Beijing, from South Africa to Italy, and from Russia to Australia, Cantor Helfgot has drawn record crowds. Concertgoers agree it is almost impossible not to be warmed by the fire of his magnificent, soulful voice. Just when you think he has reached his peak, Helfgot takes you higher.

Cantor Helfgot currently serves as Chief Cantor of the Park East Synagogue in New York City. He appears regularly for Shabbatot around the world, and is currently booked for Shabbatot and concerts through the spring of 2008. 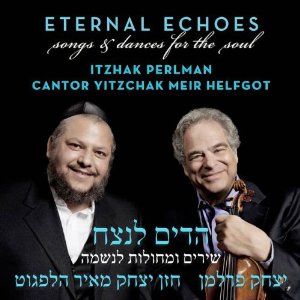 "It's so easy for him...it's just effortless," says legendary violinist Itzhak Perlman, explaining what led him to pursue his inspired collaboration with Israeli-born and celebrated Cantor Yitzchak Meir Helfgot. The melding of Perlman's soulful tone and virtuosic technique with Cantor Helfgot's spellbinding tenor come together perfectly on their new album, Eternal Echoes: Songs and Dances for the Soul.