"The cellist's tone is warm, pure and beautiful." - Strings Magazine

"Inbal Segev has everything I demand from a cellist, her tone is steady and beautifully clear...Segev treats her cello with full comprehension. A level of freedom where all is natural authority...the technical skills are amazing. Nothing seems to be difficult in her hands." - The Helsinki Times​

"Soloist Inbal Segev's ferocious energy had the listeners on the edge of their seats as if they were watching a NASCAR race in sound." - Anchorage Daily News

Cellist Inbal Segev's playing has been described as "characterized by a strong and warm tone . . . delivered with impressive fluency and style," by The Strad and "first class," "richly inspired," and "very moving indeed," by Gramophone. Equally committed to new repertoire and masterworks, Segev brings interpretations that are both unreservedly natural and insightful to the vast range of music she performs.

Segev releases her recording of the complete Cello Suites of J.S. Bach in fall 2015 on the Vox label. Audiences will have the opportunity to look behind the scenes at the making of Segev's album through a companion documentary film about her journey through the music of Bach. She has performed Bach's Cello Suites in venues around the world including Lincoln Center and The Metropolitan Museum of Art in New York, Shanghai Concert Hall, and Henry Crown Hall in the Jerusalem Theatre.

Inbal Segev has performed as soloist with orchestras including the Pittsburgh Symphony Orchestra, Castleton Festival Orchestra with Lorin Maazel, Bogotá Philharmonic, Helsinki Philharmonic, Dortmund Philharmonic, the Orchestre National de Lyon, the Polish National Radio Symphony, and the Bangkok Symphony. She made debuts with the Berlin Philharmonic and Israel Philharmonic, led by Zubin Mehta, at age 17.

In addition to her new Bach album, Segev's discography includes Lucas Richman's Three Pieces for Cello and Orchestra with the Pittsburgh Symphony Orchestra (Albany), Sonatas by Beethoven and Boccherini (Opus One), Nigun (Vox), and Max Schubel's Concerto for Cello and Horn (Opus One). With the Amerigo Trio she has recorded serenades by Dohnányi (Navona).

Inbal Segev's many honors include the America-Israel Cultural Foundation Scholarship and top prizes at the Pablo Casals, Paulo, and Washington International Competitions. She began playing the cello in Israel at age five and at 16 was invited by Isaac Stern to come to the U.S. to continue her studies. She earned degrees from The Juilliard School and Yale University.

Inbal Segev lives in New York City with her husband and three children. Her cello was made by Francesco Ruggieri in 1673. 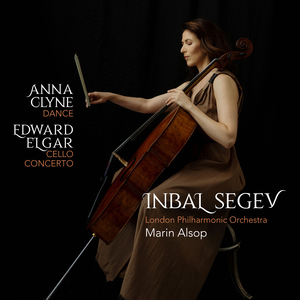 Marin introduced Inbal to Anna, sparking a special synergy between the three women. While Anna was composing DANCE, a five-movement concerto inspired by the 13th-century Persian poet Rumi, further connections ensued. Anna's soulful and vibrant music combines cultures that include her Irish-English family, Polish-Jewish ancestry and Inbal's Israeli-American heritage. Inbal expounds, "Anna's music has an old-soul sensibility but is fresh and modern at the same time. This juxtaposition of old and new has always appealed to me; it suits my playing, as well as the tone of my 1673 Ruggieri cello."

Inbal's idea to record Anna Clyne's DANCE alongside Elgar's Cello Concerto is timely: the two works were composed exactly 100 years apart. Inbal enthuses, "It is so rewarding to record and perform the work of a contemporary female composer whose music withstands comparison with Elgar's. The two pieces share a certain sensibility – a romanticism, warmth and humanity – that transcends any stylistic differences."

Elgar's Cello Concerto, written in the wake of World War I, is deeply reflective. Anna Clyne's DANCE is optimistic and forward-looking. Inbal's recording of these two cello concertos is timeless.