When Hubert Sumlin plays guitar he takes you to his World of Blues Feeling -- from despair to ecstasy, from delicate grace to raw power, from lost to found. Though he's influenced and inspired many of the most famous guitar players, Hubert owns the magic. His style is original and personal and instantly recognizable. What kind of man can make or break your
heart with his guitar?

Hubert's website is where you'd expect to find the historical and professional facts of his life, but that kind of writing could easily miss Hubert's gift to us and how he stirs our deepest emotions both musically and personally. I'm writing this from the perspective of a friend, a musician who sometimes performs with Hubert, and a Blues guitar player who appreciates him. This is neither an objective, journalistic biography nor promotional hype, but it will tell you who Hubert is.

I met Hubert in the mid-'70s when I was playing guitar in Muddy Waters' band and Hubert was with Eddie Shaw and the Wolf Gang, Howlin' Wolf's band carrying on right after Wolf had passed. I knew and loved Hubert's guitar playing and so did Muddy -- an ultimate endorsement. I was thrilled to meet Hubert, but completely surprised and moved that he immediately treated me like an old, special friend. When you hear Hubert say, "I know THAT'S right, partner!" and see that big smile, you'll be charmed, and dedicated to him for life. Hubert's sweet Soul is the special secret ingredient in everything he does, including in his guitar playing. He's already spent a long lifetime making us feel good, and Hubert assures us he "ain't through yet!"

Hubert Sumlin was born on November 16, 1931 in Greenwood, Mississippi and raised in Hughes, Arkansas. He was taken by the great Blues players he heard -- Charlie Patton, Howlin' Wolf, Muddy Waters, Sonny Boy Williamson, Lonnie Johnson, Robert Johnson, Blind Lemon Jefferson, Blind Willie McTell, and Son House. Hubert was born to take his place with these masters. His brother A.D. had nailed baling wire to a wall and plucked music out of it. Hubert told his mother that he wanted a guitar and she spent her entire $5 weekly paycheck to buy him his first.
Good investment!

When Hubert was about 10, he sneaked out to the local juke joint and stood on a pile of Coca Cola crates to see Howlin' Wolf. Drawn in by the music, he fell through the window and landed right on the stage. The club owner tried to throw out the underage boy, but Wolf insisted that Hubert stay and sit on the stage while he played. He later took Hubert home to his Mama and asked that he not be punished. A few years later, Hubert and James Cotton started a band together. Howlin' Wolf heard about them in West Memphis and soon brought Hubert to Chicago. Along with Wolf's other great guitar players in the '50s, Willie Johnson and Jody Williams, Hubert contributed to some of the deepest, darkest, most primitive and powerful Blues the world has ever known. Hubert was developing his own guitar style, but still had a way to go. Hubert tells of how Wolf once told him to step down from the bandstand, complaining that Hubert was playing over his voice. Wolf suggested that Hubert lose the guitar picks, letting Hubert play softer but with more expression and tone. Embarrassed and hurt, Hubert went home to woodshed. He was talented enough to turn the setback into an opportunity for greatness and strong enough to return. Hubert developed a guitar style based on the human touch of flesh on steel, perfectly framing and answering Wolf's roars and moans, and soloing with pain and humor, trouble and transcendence.

It is on Howlin' Wolf's early- to mid-'60s recordings for Chess Records that Hubert Sumlin's guitar playing crossed the line between impressive and legendary. Listen to, "Built For Comfort," "Shake For Me," "300 Pounds of Joy," "Louise," "Goin' Down Slow," "Killing Floor," and "Wang Dang Doodle." How did this grinning genius come up with these original, emotional, Hell-to-Heaven guitar parts? Fortunately, we don't need to know to enjoy them.

Howlin' Wolf passed in 1976, but Hubert's signature guitar tone and style lives on. Wolf's band continued on under the leadership of his great sax/harp player, Eddie Shaw. The Wolf Gang featured Hubert with Detroit Junior on Piano, Shorty Gilbert on bass, and Chico Chism on drums. Eddie and Shorty are still out there in today's edition of Eddie Shaw and the Wolf Gang, carrying on their deep Chicago Blues. Hubert left the band for a solo career in 1980, replaced by Eddie's son Vaan, a very original and progressive Blues guitar player in his own right.

Hubert was helped and inspired to claim his legacy as a bandleader by his very close friend, Clifford Antone, the Austin club owner who built the '70s Austin scene that brought us Stevie Ray Vaughan and The Fabulous Thunderbirds. As with many Blues legends of his generation, Hubert has been recorded often, both as a leader and as a sideman. Still, Hubert's albums and his gigs frankly brought him more love and respect than fame and fortune. I remember playing with Hubert in '85 at New York City's Lone Star Cafe and being awed that another of my musical heroes, Rockabilly star Carl Perkins, had stopped in to hear Hubert. Where do Blues and Rock legends go to get inspired? To Hubert Sumlin, who lacks their fame but has their love and admiration. That continues today The Rolling Stones invited Hubert to sit in with them at one of their Madison Square Garden shows in January '03.

In April 2000, a new Hubert Sumlin album was recorded that should bring Hubert's recognition in line with his accomplishments. Due to Music Business Bullshit, this album has yet to be released, but it's fair to say that this is the most anticipated unreleased Blues album today. The album was conceived and produced by Rolling Stones guitar player Keith Richards, wanting to play Blues with Hubert. The album has an interesting and legitimate concept: applying Hubert's guitar playing to Muddy Waters' songs. It features Levon Helm on drums, David Maxwell on piano, Paul Oscher on harp, Mudcat Ward on bass, and I'm proud to contribute some guitar. Keith Richards recorded "Two Trains Runnin'" with just him and Hubert. Eric Clapton plays and sings on "I'm Ready" and "Long Distance Call." The final vocal guests have not been decided yet, but they will have to do justice to the Blues that has already been recorded for this album, as well as Muddy's incomparable original vocals. Please watch this website for the latest news of progress in completing and releasing Hubert's album.

More than 50 years after his musical career began, Hubert Sumlin enjoys being one of today's Blues stars. He gigs as a bandleader all over the world. He's often asked to be part of all-star Tributes to Howlin' Wolf, and Hubert's playing gives these a direct connection to Wolf, complementing the sincere homage of David Johanssen and Jimmy Vivino. It's my pleasure to feature Hubert in the Bob Margolin All-Star Blues Revue shows that I put together, and on the Telarc Records album of the same name that will be released in June '03. Hubert delivers his trademark guitar style on an acoustic guitar, recorded at my house.

Still gigging often while most legends of his age are gone or retired, Hubert has faced and met the biggest challenge of his life. In the Fall of '02, he was diagnosed with lung cancer. He had one lung removed, and has been tested to be cancer-free. He not only has already recovered his youthful strength, but has quit smoking and drinking. Given the chance to continue to make his music, and thrilled to survive, Hubert is living and performing with fresh fire. "I ain't through yet!" he assures us, and proves it with every twisted Blue note he burns
on his guitar.

Does Hubert Sumlin have a secret? What makes him one of the all-time great Blues guitar players as well as such a good guy? I don't know, but I think they're somehow related. I do know, however, that I'm blessed to enjoy his music
and his friendship. 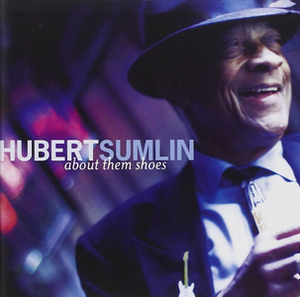 Tone-Cool/Artemis Records releases blues guitar legend: Hubert Sumlin: About Them Shoes. Sumlin is joined by special guests Keith Richards, Eric Clapton, David Johansen, James Cotton and Levon Helm. Produced by Rob Fraboni, the album is a loving tribute to Muddy Waters and contains seven songs from Waters, four from Willie Dixon, which were songs Dixon wrote for Waters, one song from Carl C. Wright and one from Sumlin.