German-born composer Hans Zimmer is recognized as one of Hollywood's most innovative musical talents‚ having first enjoyed success in the world of pop music as a member of The Buggles. The group's single Video Killed the Radio Star became a worldwide hit and helped usher in a new era of global entertainment as the first music video to be aired on MTV.

Zimmer entered the world of film music in London during a long collaboration with famed composer and mentor Stanley Myers‚ which included the film My Beautiful Laundrette. He soon began work on several successful solo projects‚ including the critically acclaimed A World Apart‚ and during these years Zimmer pioneered the use of combining old and new musical technologies. Today‚ this work has earned him the reputation of being the father of integrating the electronic musical world with traditional orchestral arrangements.

A turning point in Zimmer's career came in 1988 when he was asked to score Rain Man for director Barry Levinson. The film went on to win the Oscar for Best Picture of the Year and earned Zimmer his first Academy Award Nomination for Best Original Score. The next year‚ Zimmer composed the score for another Best Picture Oscar recipient‚ Driving Miss Daisy‚ starring Jessica Tandy and Morgan Freeman.

Having already scored two Best Picture winners‚ in the early '90s Zimmer cemented his position as a pre-eminent talent with the award-winning score for The Lion King. The soundtrack has sold over 15 million copies to date and earned him an Academy Award for Best Original Score‚ a Golden Globe‚ an American Music Award‚ a Tony and two Grammy Awards. In total‚ Zimmer's work has been nominated for 7 Golden Globes‚ 7 Grammys and seven Oscars for "Rainman"‚ "Gladiator"‚ "The Lion King"‚ "As good As It Gets"‚ "The Preachers Wife"‚ "The Thin Red Line‚" "The Prince Of Egypt" and "The Last Samurai."

With his career in full swing‚ Zimmer was anxious to replicate the mentoring experience he had benefited from under Stanley Myers' guidance. With state-of-the-art technology and a supportive creative environment‚ Zimmer was able to offer film-scoring opportunities to young composers at his Santa Monica-based musical 'think tank.' This approach helped launch the careers of such notable composers as Mark Mancina‚ John Powell‚ Harry Gregson-Williams‚ Nick Glennie-Smith and Klaus Badelt.

In 2000 Zimmer scored the music for Gladiator‚ for which he received an Oscar nomination‚ in addition to Golden Globe and Broadcast Film Critics Awards for his epic score. It sold more than three million copies worldwide and spawned a second album "Gladiator: More Music From The Motion Picture‚" released on the Universal Classics/Decca label. Zimmer's other scores that year included Mission: Impossible 2‚ The Road To El Dorado and An Everlasting Piece‚ directed by Barry Levinson.

Some of his other impressive scores include Pearl Harbor‚ The Ring‚4 films directed by Ridley Scott; Matchstick Men‚ Hannibal‚ Black Hawk Down and Thelma & Louise‚ Penny Marshall's Riding In Cars With Boys and A League Of Their Own‚ Quentin Tarantino's True Romance‚ Tears Of The Sun‚ Ron Howard's Backdraft‚ Days Of Thunder‚ Smilla's Sense Of Snow and the animated Spirit: Stallion Of The Cimarron for which he also co-wrote four of the songs with Bryan Adams‚ including the Golden Globe nominated "Here I Am."

At the 27th annual Flanders International Film Festival‚ Zimmer performed live for the first time in concert with a 100-piece orchestra and a 100-piece choir. Choosing selections from his impressive body of work‚ Zimmer performed newly orchestrated concert versions of Gladiator‚ Mission: Impossible 2‚ Rain Man‚ The Lion King‚ and The Thin Red Line. The concert was recorded by Decca and released as a concert album entitled "The Wings Of A Film: The Music Of Hans Zimmer."

In 2003‚ Zimmer completed his 100th film score for the film The Last Samurai‚ starring Tom Cruise‚ for which he received both a Golden Globe and a Broadcast Film Critics nomination. Over the past year‚ Zimmer has scored Nancy Meyers' comedy Something's Gotta Give‚ the animated Dreamworks film‚ A Shark's Tale (featuring voices of Will Smith‚ Renee Zellweger‚ Robert De Niro‚ Jack Black and Martin Scorsese)‚ and most recently‚ Jim Brooks' Spanglish starring Adam Sandler and Tea Leoni (for which he also received a Golden Globe nomination). His upcoming projects include Paramount's Weatherman starring Nicolas Cage‚ Dreamworks' Madagascar and highly anticipated Warner Bros. summer release‚ Batman Begins.

Zimmer's additional honors and awards include the prestigious Lifetime Achievement Award in Film Composition from the National Board of Review‚ and the Frederick Loewe Award in 2003 at the Palm Springs International Film Festival. He has also received ASCAP's Henry Mancini Award for Lifetime Achievement. Hans and his wife live in Los Angeles and he is the father of 4. 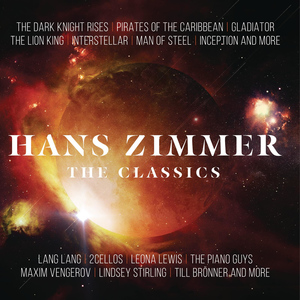 Sony Classical is delighted to announce a key new recording event: a brand-new album performed by stellar musicians of the day that showcases some of Hollywood's greatest ever movie themes, written by one of the world's most innovative musical talents and leading film composer of our time – Hans Zimmer. This vivid collection of back-to-back blockbuster hits brings together for the first time Zimmer's unmistakeable movie themes, re-imagined and in arrangements especially written for some of our top musicians including superstar pianist, Lang Lang; cello wizards, 2CELLOS and Tina Guo; outstanding violinists, Maxim Vengerov and Lindsey Stirling; Classic BRIT Award-winning saxophonist, Amy Dickson; internet sensations, The Piano Guys and with stupendous vocals by Leona Lewis.