A formidable and incandescent presence on the podium, conductor Gisele Ben-Dor is described by the Los Angeles Times as "a star on the rise.a ferocious talent." "Ben-Dor casts her spell," the Boston Globe reported, "a tremendous musician, expert technician, charismatic performer." These comments reflect the overwhelming praise Ms. Ben-Dor has garnered in her appearances as guest conductor with major orchestras and opera houses throughout the world and as Music Director of the Santa Barbara (CA) Symphony, as she becomes its Conductor Laureate in 2006. In demand internationally, next seasons bring debuts with The Rotterdam Philharmonic, Bern Symphony, Brabant Symphony, Jerusalem Symphony, Israel Symphony, Orchestre de Cannes as well as return engagements in France and Israel.

A former associate conductor of the New York Philharmonic, Ms. Ben-Dor returned to the Philharmonic in 1999 to substitute for Daniele Gatti in a program of Mahler and Beethoven, without a rehearsal or scores (a feat which she had accomplished earlier by stepping in at the last minute for Kurt Masur). "If Ms. Ben-Dor had merely survived in a work as complex as the Mahler under the circumstances, she would have done well; she did more, making the interpretation her own." The New York Times. On other occasions, Maestra Ben-Dor has appeared with the Philharmonic in New York 's Central Park before an estimated audience of 100,000.

Although Maestra Ben-Dor is a master conductor of the established classics, as a Uruguayan by birth and upbringing she is a particularly persuasive champion of Latin American music - notably the works of Ginastera, Revueltas, Piazzolla, and Luis Bacalov - and is widely regarded as one of the world's most dedicated and idiomatic exponents of this repertoire on account of her many recordings and festivals.

Some of her major performances of the music of Ginastera have included a new production and European premiere of Ginastera's last opera, "Beatrix Cenci" at the Grand Theatre de Geneve , to unanimous critical acclaim and Ginastera's Turbae ad Passionem Gregorianam, in Madrid , also a European premiere. Recently, Ms. Ben-Dor was signed by EMI records for a new recording with the Santa Barbara Symphony of vocal music by Ginastera, featuring Placido Domingo, Ana Maria Martinez and Virginia Tola in excerpts from Ginastera's first opera "Don Rodrigo." Previous CDs are the world premiere recording of the complete score of Ginastera's ballet "Estancia, featuring Maestra Ben-Dor with the London Symphony; Ginastera's Variations Concertantes, also with the London Symphony, for Koch International; and the world premiere of both versions of the Glosses on Themes of Pablo Casals

Maestra Ben-Dor is currently Conductor Laurate of the Santa Barbara Symphony where she has significantly raised artistic standards, whilst working intensively in the Santa Barbara community in the area of music education and focusing attention on the music of Latin America . In 2000 she organized the groundbreaking Revueltas Festival, which elicited high praise worldwide for its imaginative approach and commitment to the cause of the composer. In the words of the Los Angeles Times " Gisele Ben-Dor can be counted on to unearth something important each season." In 2004, working with Georgina Ginastera, the composer's daughter, she created the exciting and extraordinarily popular Tango and Malambo Festival a wide-ranging feast of concerts, dance, and film celebrating the urban and universally admired tango
and its less familiar cousin,
the more rustic malambo .

Ms. Ben-Dor also holds the position of Conductor Emerita of the Boston Pro-Arte Chamber Orchestra, a post to which she was elected exclusively by the musicians. Ms. Ben-Dor's talent was also recognized by Leonard Bernstein, with whom she shared the stage at Tanglewood and the Schleswig-Holstein Music Festival. A winner of the Bartok Prize of Hungarian Television, Ms. Ben-Dor has toured extensively in Eastern Europe . Ms. Ben-Dor made her conducting debut with the Israel Philharmonic in Stravinsky's "The Rite of Spring," a debut that was televised by the BBC/London throughout Europe . Born and raised in Uruguay of Polish parents, she studied at the Rubin Academy of Music in Tel-Aviv and the Yale School of Music before residing in the United States , where she lives with her husband and two sons. They are recent American citizens.
At a Glance:

The Soul Of Tango 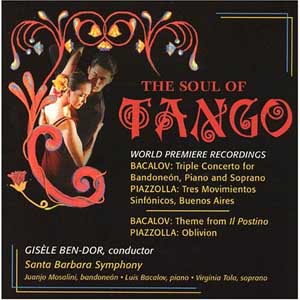 Gisele Ben-Dor leads the Santa Barbara Symphony in The Soul Of Tango, featuring: Juanjo Mosalini: bandoneon, Luis Bacalov: piano & Virginia Tola; soprano. The program includes: Luis Bacalov's: Triple Concerto for Bandoneon, Soprano and Orchestra & the Theme from Il Postino, along with Astor Piazzolla's: Tres Movimientos Sinfonicos, Buenos Aires & Oblivion. This CD is the record of a memorable event in Santa Barbara, California, that makes the disc stand out from the steady flow of tango-based albums. It features two world premiere recordings of the pair of major works here. In 2004 the music director of the Santa Barbara Symphony, Gisele Ben-Dor, organized the Tango and Malambo Festival, a ten-day celebration which included early and recent Latin American music, dance, films and other events.

The Soul Of Tango
http://www.giseleben-dor.com