When you meet Friar Alessandro Brustenghi you realise straight away there is something beatific, possibly angelic about him. Slight and sweet in his brown Friar's garb. When we meet in the Porziuncola-Basilica of Santa Maria degli Angeli/St. Mary of the Angels in Assisi he talks about the troubled passionate saint with empathy.

Like St. Francis, Friar Alessandro, 34, has multiple missions and was conflicted in his past. His journey to his final vow, was a precarious soul search, like St. Francis himself.

For a long time his music and his faith were hanging in the balance. Fortunately the release of Voice of Assisi shows that ultimately neither was sacrificed. His voice is pure and pain soaked. The songs heartbreakingly beautiful. Alessandro's eyes have a permanent twinkle. In his voice you hear the essence of who he is, of being filled with love.

‘When I was a boy I wanted to be a drummer but I knew I would have to study music first, so I began with the organ when I was 9 or 10. At first I was made to do just the solfeggio scale but I wanted to play Bach. I asked my teacher again and again and again and finally he gave me a piece of Bach and I played it well and I continued to study piano and organ and when I was 14 I decided to study specifically music and I went to an experimental school where we had normal lessons, but many many more hours of music.

‘We studied chant, harmony, composition, the history of music and regular things like Latin and philosophy. We worked for six hours in the morning and three in the afternoon and at the same time I was in the music conservatory. At 6am I started from my home (a village) to come toPerugia. When I went to the conservatory it was beautiful.

‘I'd always sung in the choir but I had a tiny voice. One teacher told me that I should sing as well not because she thought I could improve but because she needed the students to fill up her class. I began singing in October 1996 in another class. My voice was still tiny and at the end of the year, by the time I was 19, they were not convinced about me and they thought to stop me, and in that moment I decided to become a friar.

‘I discovered the presence of God, a new presence, a different presence. Not just the feeling of goodness, but God as a person. I felt him close to me. He is in the creation, he is in the people, I felt him inside of me and his love for all people, and not for experiences. Suddenly I was not attracted to experiencing danger. I felt it was love that is important I felt if Jesus gave Himself the only way for me to say thank you was to give myself to him as a consecrated person.

‘I was very afraid of this experience, afraid because I had wanted to become a musician. I wanted to have a family of my own, a wife, children. All this was in opposition with this desire that was borne inside of me. It was a conflict.

‘Then I saw a film about St. Francis. He too started off as a merchant and came to the conclusion that he couldn't be linked to material things. This was all inside of me but I thought I am just a boy, let's just think about this for a few years. Maybe there's another way. Maybe I can be a musician and I can still pray and do something for other people.

I thought for three continuous years. By the time I was 19 I needed help to know if this was a real calling and it was at that moment that I decided to leave studying the organ so I would understand more my new vocation because it simply wasn't possible to practise five hours a day and study for my vocation. It was a very hard choice, but I thought my music, my organ, was a gift that I had that I wanted to sacrifice to give to God. Of course you need to sacrifice the wrong things not the good things, but I didn't know that then.'

The road to Alessandro fulfilling his vocation to become a friar continued to be turbulent. He was told that he could not enter as a postulant unless he passed a singing exam and he had been told by his teachers that he was not up to passing this exam. ‘I wasn't sure what I was going to do. If I wasn't going to continue in the Friary it was necessary to have some kind of diploma. I also felt that it was a good thing to have discipline inside of you. You started this study, don't stop until the conclusion. So I began to train myself with breathing exercises. It was like climbing a mountain, but I studied for hours and hours per day with the kind of breathing that felt as though I was going to break my heart and then it was a miracle, a miracle of training and a miracle of God.

‘I found my voice. I passed the exam with a distinction. I began to love opera. I met a friar who introduced me to the voices of the great tenors. I joined the order and when I was a postulant I told my spiritual master I will stop singing now, I just want to be a friar to work and pray together. My master said "No, you will continue. It is a talent from God, you can't refuse it."

‘So I continued to sing doing concerts and exhibitions, and then the master said, "Now you are going to stop." At first it was hard, then I felt a strength because I discovered the music was inside of me. It was another spiritual connection. God's gift was in my heart. When I woke up in the morning in my heart I heard melodies.

‘This had been a test and when my spiritual master discovered that I was at peace with this and I was able to leave singing he told me I would continue after two months. I had my first profession of vows and then I began to study for the final profession. Then I had a big crisis of faith. I didn't believe in my vocation. It's a mystery to me why.

‘I asked for help. They told me it was just a temptation. So after this crisis, which was in November 2001, I decided, like St. Francis, to live like a hermit, in solitude. I could work with wood and I would not wear a habit. I wasn't tempted by a secular life at that time. I didn't want to have a girlfriend; it wasn't that kind of temptation -It was working out if God wanted me to be a Franciscan friar. How was I going to do that when it seemed to me that the Devil was trying to tempt me away from this?

‘I believed in the Lord, but perhaps another lord. I wanted to feel him inside of me. I waited till I would feel myself be a brother of all men and a brother of the friars but I was not so brave to ask to come back. I waited for three years and it was like a self-punishment. I continued singing and woodworking and restoring musical instruments.

‘Eventually I worked out that I should come back and I could still continue singing. I often sing Neapolitan songs and opera songs that are not religious. Why not? People think, "Oh, why is the Friar singing a love song?" Well why not? It's not required that I'm living what I'm singing. I am just a channel. I am a man, I am a creature. I have feelings inside of me but I channel them to communicate so I am able to sing whatever I want, whatever is beautiful.'

The three years he spent on his own were long and torturous. ‘I would sing every day and weep every day.' By the time he was ready to re-enter the friary in the January 2005 his singing voice was palpably filled with the love he talks about. Mentally and spiritually he grew stronger and more able to balance his life in music and his life in God.

‘The journey was not easy, but finally I felt I could find balance and do both. After the solemn profession (final vows) in 2009 I was thinking that perhaps I should stop singing and I asked for a sign. There was a celebration of the night prayer and at the end of this prayer a man came and said "Your voice is fantastic. God gave you an incredible gift. When you started to sing I felt something incredible inside of me." I thought that this was a sign from God.'

Alessandro was singing again in a small church in 2011, when he was encouraged to audition with a manager. The manager was moved and amazed and took his finding to Decca Records who were similarly stunned at the self-doubting friar with the miracle voice. They discovered him to be an extraordinary tenor, his voice velvet and warm. And he has become the first friar to land a deal with a major record label – Universal Music Group.

‘I worried that this was too big a project for me but I also felt that this had happened for a reason, maybe a mission, maybe through God. I don't love so much the fame, cameras or journalists and indeed the money will go to assist the activities of the Order of the Friars Minor.

‘We decided with Mike Hedges the producer to make an album with popular songs of faith and some special songs of St. Francis. There were poems that he wrote with some original music that I've been studying how to reconstruct.'

Mike Hedges, a producer best known for his work with U2, Manic Street Preachers and The Cure, heard Alessandro's voice as a force of love and beauty. The album that they have made - Voice From Assisi – recorded at the historic Abbey Road, is one of passion, history, and soul. 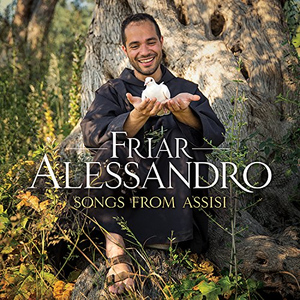 Alessandro Brustenghi is a modest friar living in a community of Franciscans around the hilltop monastery in Assisi, Italy. He's also the first friar in history to land a major record deal, a crossover tenor with three albums under his belt. This album is a compilation to accompany his PBS special airing in March 2017, FRIAR ALESSANDRO: THE VOICE FROM ASSISI.