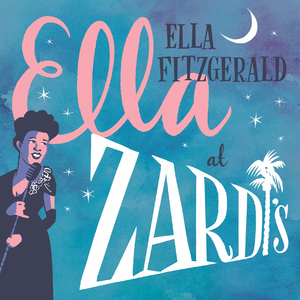 Melissa Manchester & Ella Fitzgerald 1977 Memorex Commercial
1 It All Depends On You
2 Tenderly
3 Why Don't You Do Right
4 Cry Me A River
5 In A Mellow Tone
6 Joe Williams's Blues
7 A Fine Romance
8 How High The Moon
9 Gone With The Wind
10 Bernie's Tune
11 'S Wonderful
12 Glad To Be Unhappy
13 Lullaby of Birdland
14 The Tender Trap
15 And The Angels Sing
16 I Can't Give You Anything But Love
17 Little Boy
18 A-Tisket, A-Tisket
19 My Heart Belongs To Daddy
20 Airmail Special
21 I've Got A Crush On You
Show all tracks
Hide

Verve Records and UMe will close out their year-long celebration of jazz legend Ella Fitzgerald's centennial with the ultimate present for her 100th birthday – a completely unreleased live album. More than 60 years after it was recorded, Ella At Zardi's finally is now released. Recorded on February 2, 1956 at Zardi's Jazzland in Hollywood, Ella At Zardi's features the entirety of the evening's two-set, 21-song performance, which captures an inspired Fitzgerald, backed by a stellar trio comprised of pianist Don Abney, bassist Vernon Alley and drummer Frank Capp, singing and swinging in front of an animated, adoring crowd, just days before she'd go on to record the album that would catapult her to stardom. The concert was originally recorded by Norman Granz to celebrate the creation of, and Fitzgerald's signing to, Verve Records, which Granz founded largely to give Fitzgerald the attention that he felt she wasn't receiving at her then-current label, Decca. Ella At Zardi's was planned as the label's inaugural release but shelved in favor of the now-classic studio album Ella Fitzgerald Sings The Cole Porter Song Book, which kicked off a best-selling, signature series of Song Book releases. The Zardi's tapes languished in Verve's vaults for six decades.