Since then, Elīna has established herself as one of the music world's major stars through her performances with leading opera companies and symphony orchestras around the world. She has captured critical and popular acclaim for her beautiful voice, intelligent musicianship, and compelling stage portrayals.

Among other roles, she is particularly famed for her portrayal as Bizet's Carmen which she has sung at both the Royal Opera House Covent Garden and Metropolitan Opera to critical acclaim; the NY Times named her "the finest Carmen in 25 years…". The Carmen production was broadcasted in more than 1,000 movie theatres worldwide and is one of the most viewed and successful "Live in HD" performances of the Metropolitan Opera.

Recent highlights include a new production of Samson et Dalila at Staatsoper Berlin with Daniel Barenboim where Elīna stared as Dalila, as well as she returned to the Metropolitan Opera as Marguerite in La damnation de Faust. During the 2020/21 season Elīna will make her role debuts as Amneris in Verdi's Aida at Opéra national de Paris and as Kundry in Wagner's Parsifal at the Wiener Staatsoper. She will also star at various festivals and galas throughout Europe, America, South America and beyond.

In September 2005 Elina became an exclusive artist with Deutsche Grammophon (DG). Her first solo recording ‘Aria Cantilena' was released in March 2007 to great popular and critical acclaim. Two of her previous albums (‘Romantique' and ‘Meditation') both won an ECHO Klassik award. Her most recent album ‘Sol y Vida' was released in May 2019 and has been unanimously praised by the critics: "Garanča's selection of flamboyant Mediterranean and Latin American songs is a predictably good fit for her ripe and beguiling timbre." (Gramophone).

Elīna has been the recipient of many awards: Musical America's ‘Vocalist of the Year' 2010; MIDEM's ‘Singer of the Year' 2007 and the ECHO Klassik award for ‘Female Singer of the Year' the same year. In May 2013, Elīna was honoured by the Wiener Staatsoper with the title of ‘Kammersängerin'. One of the youngest recipients of the Award, she was honoured for her devotion to the House, singing over one hundred and forty performances of eighteen roles since her debut in the House in 2003.

For more than ten years, Elīna Garanča and Karel Mark Chichon have been sharing the stage with young, aspiring talents from the opera world as part of their Open-Air concerts in Göttweig and Kitzbühel, Austria. These appearances often started a successful international career of the young protégés.

Following this collaboration, the idea of young talent initiative "ZukunftsStimmen" with the support of Raiffeisen Bank was born. It is particularly important to Elīna Garanča that "ZukunftsStimmen" is not just a classical singing competition. Rather, it is about discovering, accompanying, helping at the beginning of a career – and of course about the opportunity to be on stage with Kammersängerin Elīna Garanča and Maestro Karel Mark Chichon during the classical Open-Air concerts in Göttweig Abbey and Kitzbühel.

"Working with young artists is a real heartfelt wish for Karel and me. We have already invited many young musical guests to our concerts, who consequently started a world career. Finding these young talents, but also accompanying them through tough classical music business and offering them a helping hand for the next step in their careers, that is a great dream for both of us. A dream coming true." Says Elīna Garanča about the project.

He has presented his own series at the Wigmore Hall (a Britten and a Poulenc series and Decade by Decade – 100 years of German Song broadcast by the BBC) and at the Edinburgh Festival (the complete lieder of Hugo Wolf). He has appeared throughout Europe (including London's Wigmore Hall, Barbican, Queen Elizabeth Hall and Royal Opera House; La Scala, Milan; the Chatelet, Paris; the Liceu, Barcelona; Berlin's Philharmonie and Konzerthaus; Amsterdam's Concertgebouw and the Vienna Konzerthaus and Musikverein), North America (including in New York both Alice Tully Hall and Carnegie Hall), Australia (including the Sydney Opera House) and at the Aix en Provence, Vienna, Edinburgh, Schubertiade, Munich and Salzburg Festivals.

He was a given an honorary doctorate at the Royal Scottish Academy of Music and Drama in 2004, and appointed International Fellow of Accompaniment in 2009. Malcolm was the Artistic Director of the 2011 Leeds Lieder+ Festival. 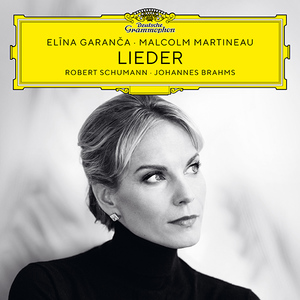 For Elīna Garanča, the Lied is the most intimate of musical forms. Whereas in opera, for example, one singer may be directly reacting to another, performing Lieder is about the expression of one person's innermost feelings: "There are no limits to longing and imagination in Lieder." The Latvian mezzo has now recorded her first solo recital album devoted exclusively to this genre, choosing works that she has been performing live on stage for many years with the aim of documenting her personal interpretations of some classics of the German song repertoire. The album is released today, 6 November, 2020, by Deutsche Grammophon.