Born into an artistic family in Tirana, Albania, in 1981, Elina Duni made her first steps on the stage as a singer aged five, singing for National Radio and Television.

In 1992, after the fall of the communist regime, she settled in Geneva, Switzerland, with her mother, where she started studying classical piano and thereafter discovered jazz.

She went on to study on the jazz programme at the Hochschule der Künste in Bern. During this time, she formed the Elina Duni Quartet with Colin Vallon on piano, Patrice Moret on double bass and Norbert Pfammatter on drums. This represented a return to her musical roots, a combination of Balkan folk songs and jazz.

After two albums, "Baresha" (2008) and "Lume Lume" (2010), both on Meta Records, the quartet went on to release for ECM in 2012, "Matanë Malit" (Beyond the Mountain) and in 2015, "Dallëndyshe" (Swallow), which were praised by the wider European media for their lightness as well as their subtle manner of exploring Albanian folklore.

In 2014, Elina Duni released her first album as a singer-songwriter in Kosovo and Albania, entitled "Muza e Zezë" (The Black Muse).

In 2017 Elina Duni was one of the recipient of the Swiss Music Prize and started two new projects:

- A duo with the highly acclaimed london guitarist Rob Luft

The project entitled "Partir" featuring Elina Duni as a soloist (accompanying herself on piano, acoustic guitar and percussion), has been released on record in April 2018 on ECM.

"An out of the ordinary recording, yes by all means, but lyrical, melodic music and thought provoking all the same." UK Vibe

"The sparse, fragile, barely consonant chords of her piano style beautifully complement the rawness of her voice." Songlines

"Continues to haunt long after the final notes have faded" RnR

Rob Luft is a rising star - an award-winning 25-year-old jazz guitarist from London whose virtuosity has been compared to that of legends John McLaughlin, Al Di Meola, Paco De Lucia and Kurt Rosenwinkel.

Rob Luft is a superstar in the making – a virtuoso, a band-leader, a composer of vibrant, original music and a captivating communicator.

There are very few debut albums that can create such an impact and launch an artist into the domestic and European scene as Rob Luft's 2017 debut ‘Riser' managed to do. On the back of winning the Kenny Wheeler Jazz Prize, London based Luft hurtled onto the scene with an album of originals and an instrumental sound so strong it's hard to believe a 23-year-old had produced it. Both his guitar playing and compositional voice were unmistakably his own, the camaraderie and band interplay deeply developed. But it was the blend of Rob's joy in music-making, his humility and humanity in working with other musicians and his natural warmth as a communicator that saw him quickly become one of the most talked-about, in-demand instrumentalists to emerge from the UK in a long time. With his second album Life Is The Dancer Rob continued with the same band, a new set of originals and with that undeniably warm and joyous sound we'd come to expect from him.

One of the most influential figures on Michigan's indie rock scene, Fred Thomas is best known as the founder and leader of the celebrated indie pop band Saturday Looks Good to Me, but the remarkably prolific musician and songwriter has been involved in a wealth of other projects, as well as recording several albums as a solo artist. Following his involvement with groups such as the indie-punk band Lovesick, slowcore ensemble Flashpapr, and of course the retro-pop of SLGTM beginning in the late '90s, Thomas began releasing material under his own name near the beginning of the 2000s. Early albums such as 2004's Turn It Down and 2005's Sink Like a Symphony were more stripped down and confessional than much of his work with SLGTM. Following 2012's Kuma, a set of Neil Young-inspired folk-rock, his songwriting style became much more direct and vividly detailed, while his arrangements became more intricate and expansive on albums such as 2015's All Are Saved and 2018's Aftering.

Thomas was born in Ypsilanti, Michigan on August 6, 1976. He grew up absorbing influences from his parents' record collection, which was dominated by Joni Mitchell, the Rolling Stones, and Bob Dylan (his folks would take him to see Dylan when he was nine), and after learning to make music from the clatter of various household objects, he took up the guitar at age 11. By the time Thomas was in junior high, he'd started playing in bands with friends from school, and in 1994, the 17-year-old formed a math rock band called Chore, who played extensively in Michigan and launched East Coast and West Coast tours before splitting up in 1996.

After Chore disbanded, Thomas immersed himself in a wide variety of projects -- he recorded and toured with Warren Defever's experimental pop ensemble His Name Is Alive, and was a member of emo-punk band Lovesick as well as chamber pop combo Flashpapr. In 1999, Thomas launched Saturday Looks Good to Me as a home-recording project, influenced by his friend Chris Fachini of Teach Me Tiger; featuring Thomas and a revolving cast of friends and musicians embracing an eclectic range of pop influences, the first SLGTM album appeared in 2000, and after playing a handful of live shows under the name -- Saves the Day invited SLGTM to tour with them in 2002, and Thomas formed a live version of the group and they hit the road.

Between 2000 and 2007, Saturday Looks Good to Me released four proper albums and several singles and compilations, worked with noted indie labels K Records and Polyvinyl Records (as well as Thomas' own Ypsilanti Records), and toured extensively in the United States and Europe, with Thomas often joined by collaborators Scott Sellwood on keyboards, Betty Marie Barnes on vocals, and Ryan Howard on drums. In 2008, Saturday Looks Good to Me went on hiatus, and Thomas continued to maintain a busy schedule, forming the indie electronic duo City Center with SLGTM colleague Howard, playing guitar with the surf-influenced pop combo Swimsuit, recording the album Mighty Clouds with former SLGTM vocalist Barnes, and serving as producer and engineer on recordings by acts such as NOMO, Tyvek, Beauclerk, and Corpse Kisser. He also started the Life Like label in 2010, which released dozens of limited-edition tapes and LPs by various projects of Thomas and his friends, as well as a zine called Defects Mirror.

Everything Is Pretty Much Totally Fucked UpThomas released his first proper solo album in 2002, Everything Is Pretty Much Totally Fucked Up, and a steady stream of recordings have followed, ranging from carefully crafted full-length albums to limited-edition experimental CD-Rs. In 2012, he assembled a new edition of Saturday Looks Good to Me and began recording and touring again under the handle, though typically it was far from his sole musical vehicle -- that same year, Thomas also appeared on a new album from Ian Svenonius' band Chain & the Gang, served as engineer and multi-instrumentalist on Hewn from the Wilderness by Calvin Johnson's group the Hive Dwellers, and released an ambitious new solo album, Kuma. Another solo effort, the eclectic and personal All Are Saved, was released by Polyvinyl in the spring of 2015. After getting married and moving to Montreal, Thomas recorded the follow-up to All Are Saved in Athens, Georgia with producer Drew Vandenburg. The album, titled Changer, was released by Polyvinyl in early 2017. This was followed in 2018 by Aftering, which included guest appearances from past collaborators and tourmates such as Anna Burch and Elliot Bergman (NOMO, Wild Belle).

Matthieu Michel (born April 29, 1963 in Freiburg im Üechtland , Switzerland) is a jazz trumpeter and flugelhorn player from western Switzerland , who lived primarily in Vienna until 2004.

Matthieu Michel plays (s) in a quintet by the Swiss Andy Scherrer ("Tribute to Joe Henderson "), but also in the Vienna Art Orchestra . In the mid-1990s he also recorded his own records with Richard Galliano , Heiri Känzig and Joris Dudli , but also with Joachim Kühn , Riccardo Del Fra and Daniel Humair . A few years ago, Michel also founded a quartet with Alex Deutsch (drums), Peter Herbert (bass) and Martin Reiter (keyboards). 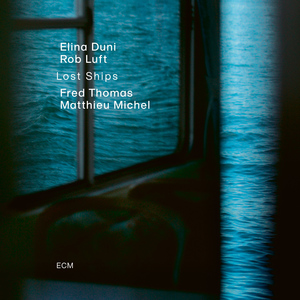 Lost Ships is the first collaborative album from Elina Duni and Rob Luft. Their programme of songs of love and exile has been gathering momentum since 2017, when the Albanian-Swiss singer and the British guitarist began their collaboration at a series of workshops in Lausanne. And what started as a kind of enhanced version of Duni's solo Partir project, with Luft expanding the atmospheric sound-world of the songs with electronics and effects, has developed into a partnership where musical parameters are established by both artists, with guitar often effectively a second voice. Along the way the duo has been augmented by distinguished guests. On Lost Ships British multi-instrumentalist Fred Thomas – heard here on piano and percussion - and Swiss flugelhornist Matthieu Michel make significant contributions to the overarching concept.