Bridges from the East 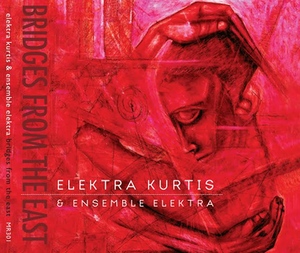 Bridges from the East, the new CD from Polish born Elektra Kurtis comes straight out of the composer's Greek heritage. Always an outsider, Kurtis' music is deeply personal with interweaving elements referencing different music styles and origins. Committed to making the music her own, Bridges from the East reflects the sound of Eastern Europe and North Africa, cultures Kurtis relates to the most, and although separated geographically all of this music is connected by human spirit, emotion, ethics, and expression.

Deeply influenced by 20th Century Classical composers such as Bartok, Stravinsky, and Lutoslawski, as well as Jazz and Arabic folk music, Kurtis' cultural threads are expressed on this disc through her Quintet - Ensemble Elektra which she started in the 1980s.  Here's a breakdown on the tracks:

1. Triton is dedicated to the Greek sea god with the horn which is heard the opening theme.

2. Hasaposerviko is Part 1 of "Rhapsody in Greek," a dance utilizing the flavor of Rebetiko in the first section followed by an original dance feel in the second.

3. Red Apple starts with a Polish folk theme which develops into an improvisatory irregular groove.

5. Trebble Duet Nr.1 was inspired by Bartok, Henry Threadgill and Steve Coleman and includes improvisations on eastern modes and rhythms.

6. Zeibekiko is Part 2 of "Rhapsody in Greek." A jazzy dance with a 9/8 rhythmic pattern, the track mixes Arabic, Greek and New York flavors.

7. August 7 was written for Kurtis' Mother on the day she lost her fight with cancer. It is about her Mother's journey on the Greek mythological Styx River, the divide between Earth and the Underworld. Her boat moves through the water and disappears from sight.

8. Eastern Caravan was inspired by Argentinian tango as well as the music of the European Gypsies.

9. Like Rocks, a composition which evolved over time, reveals the realization of what is truly significant in life.

10. Kalamatianos, Part 3 of "Rhapsody in Greek," is written in a 7/8 rhythmic pattern and references Arabic and Greek musical styles.

12. Krakus is based on themes inspired by the Polish mountains – Podhale. The driving bass line compliments the changing moods of the track with clarinet and violin solos.

13. East West was inspired by the Greek art song masters of the 60s and 70s, Mikis Theodorakis and Manos Hadjidakis. Their long melodic phrases and folk dance rhythms create an off center, contemporary Zeibekiko dance.

14. Bossa for Kitsa was written by Kurtis' for her dear Aunt Kitsa on the day she got the news about her accidental passing in Athens, Greece. Aunt Kitsa was a lively, energetic, and resourceful lady, and a fabulous cook. The Bossa feel fits her very well.

16. Summer's End, the closer was written at the end of a hot New York City summer and the funky track uses irregular meter and several driving bass lines to make it's point.