Touted as a "gifted young guitarist" by the New York Times, and "a guitarist to keep an eye on" by the Washington Post, Mak Grgic is  emerging as a star on the worldwide stage. An expansive and adventurous  repertoire attests to his versatility and wide-ranging interests: from  the Baroque and Renaissance to music of the cinema; from ethnic music of  his native Balkans to extreme avant-garde and microtonal music, Mak's  extraordinary talents and tastes as soloist, collaborator, and  recording artist are fueled by his curiosity, imagination, and boundless  energy.

As a  concert artist, he averages eighty-five performances a year - nearly two  bookings per week - as both soloist and collaborator. He is a founding  member and active performer in two duos-the Flamenco-style "Duo Deloro"  with Adam Del Monte, and the new music-focused "FretX Duo" with Daniel  Lippel, guitarist of the International Contemporary Ensemble (ICE). As  Young Artist in Residence with the Da Camera Society of Los Angeles, he  founded "DC8," an octet declared "an inspiring addition to the  contemporary music landscape in Los Angeles" by the Los Angeles Times.  Other ongoing collaborations include the JACK Quartet, Martin Chalifour  (concertmaster, LA Philharmonic), cellists Jay Campbell and Joshua  Roman, The Assad Brothers, and John Sant'Ambrogio (St. Louis Symphony).

In 2009 at the age of 22, Mak made his debut in Russia, performing the Rodrigo Concerto de Aranjuez  with the St. Petersburg Symphony Orchestra under Vladimir Lande. The  following spring, while on tour in the U.S. as a member of the Zagreb  Guitar Quartet, he performed with Christopher McGuire, guitarist and  artistic director of the popular Allegro Guitar Series in Austin, Texas.  That summer, at the Lancaster Festival in Ohio, he performed Rodrigo's Fantasia para un Gentilhombre with the Festival Orchestra under Gary Sheldon, as well as Boccherini's famous Introduction et Fandango with the Festival String Quartet.

A  month-long tour recently took him to China, Japan and the Balkans. Other  engagements include performances and residencies at several venues in  Portugal; in Castilla-Leon/Spain, at the Teatro Cervantes de Bejar; the  Sarajevo Music Academy; at several venues in Slovenia; the Paris Guitar  Foundation; Zurich University of the Arts, and the Hong Kong  International Guitar Festival.

In North  America, he has performed at the Austin Classical Guitar (in recital  with Martin Chalifour); Beyond Microtonal Music Festival/Pittsburgh, the  Dallas Opera (with chamber orchestra) in performances of Peter Maxwell  Davies's The Lighthouse; Dumbarton Concerts/Washington, D.C.;  Kitchener-Waterloo/Ontario; the National Gallery of Art; NAMM  Show/California; Strathmore Hall/Maryland; the New York Classical Guitar  Society; Triangle Guitar Society/North Carolina; and numerous other  venues and guitar societies across the globe.

Also an active entrepreneur and educator, Mak is  director of EuroStrings, a consortium of seventeen guitar festivals in  Europe; as well as the European Guitar Festival Collaborative; Zabreb  Guitar Festival; Roots & Notes Interactive Music Festival in  Croatia; and the Music@Rush Hour/Los Angeles. He also serves as director  of the Elemental Guitar in Santa Monica, an exciting program for youth,  as well as an adjunct faculty member at Mount St. Mary's University in  Los Angeles.

An enthusiastic recording artist, Mak's  albums capture a probing and continuous exploration of the world of  guitar and all its possibilities. His latest recordings, "Balkanisms" for Naxos Music in collaboration with RTV Slovenija and "MAKrotonal" for MicroFest Records, explore a vast  repertoire spanning ethnic music, microtonal, new music and early music  on re-fretted instruments, such as a "zig-zag fretted Bach prototype  guitar" that captures the temperaments of the Baroque period. Other  albums in progress include an homage to Ligeti spotlighting  gamelan-inspired guitar arrangements.

Born in Ljubljana, Slovenia, in 1987, Mak studied  guitar in Zagreb with the revered Ante Cagalj at the Elly Basic Music  Academy. By the age of 14, he was balancing his world champion status in  karate with his love for the guitar. Throughout his high school years,  he concertized in Ljubljana and Zagreb, splitting his weeks between the  two cities, as well as competing in professional martial arts contests  across Europe and Asia. Following an injury to his left thumb, he made  the decision to focus solely on a career in music, going on to complete a  bachelor's degree with Alvaro Pierri at the University for Music and  Performing Arts in Vienna.

Pursuing advanced studies in the U.S., Mak was  one of the first students to apply for USC Thornton's new Arts  Leadership graduate program, which he incorporated into his doctoral  studies in guitar. He has been a student of William Kanengiser and Scott  Tennant of the Los Angeles Guitar Quartet, in addition to Brian Head,  artistic director of Guitar Foundation of America. In the fall of 2017,  he began the Artist Diploma program at USC, the first guitarist in the  university's history to be admitted to this elite program.

Mak proudly  plays and endorses an array of fabulous concert guitars made by diverse  craftsmen, including German Antonius Muller, Chinese master luthier  Hanson Yao, Bosnian Slavko Mrdalj, Slovenian Samo Sali, as well as a  historic 1966 Jose Ramirez, all of this in addition to other quirky  re-fretted and remodeled guitars.

"a superb, finely detailed reading that showed Grgic is a guitarist to keep an eye on."  - THE WASHINGTON POST

One of the leading flamenco and classical guitarist/composers of his generation, Adam del Monte has made it his life mission to fully express himself in these two genres, transcending labeling and convention. Always having incorporated a wide array of musical styles in his compositions, Del Monte and has embarked on a journey creating a unique sound and language of flamenco that is both steeped in tradition and progressive in its openness to musical flavors from around the world.

Del Monte has recorded for Deutsche Gramophone – the featured flamenco guitar part in the double Grammy award winning opera Ainadamar by Osvaldo Golijov (2006), with soprano Dawn Upshaw and the Atlanta Symphony, conducted by Robert Spano.  Since then he has toured this opera in, Carnegie Hall, NY, Lincoln Center, NY, Barbican Center, London, Colorado Music Festival, in Boulder, Chicago Symphony and many more.

Del Monte has recently composed a first of its kind Flamenco Opera. Llantos 1492, is an opera that is a full integration of the flamenco and classical/operatic world in all aspects, including orchestral, aesthetic, stylistic and rhythmic. Scenes from Llantos was performed as a pre-debut at the piano, guitar and reduced cast of singers as part of the Tucson Desert Song Festival at the University of Arizona, on January 30th, 2019.

In 2019 del Monte has taken part of the EuroStrings International Guitar Festivals in Szegen, Hungary and Sarajevo, Bosnia, where he performed as a soloist and with his guitar duo, Duo Deloro with Mak Grgic.

He also has collaborated with Persian Singing legend Homayoun Shajarian and the Pacific Symphony with maestro Carl St. Claire.

Del Monte has composed his second flamenco guitar concerto, Paisajes, which was debuted and commissioned by the St. Monica Symphony. He has since performed it with the Moscow State Symphony in Tchaikovsky Hall and the Simon Bolivar Symphony Orchestra, in Caracas, Venezuela.

He has also recorded Avner's Theme by film composer John Williams for the sound track CD of the motion picture Munich by Steven Spielberg. Other film credits include featured participations in Films such as Knight and Day with Tom Cruise and Cameron Diaz; Mr. and Mrs. Smith with Brad Pitt and Angelina Jolie, music by John Powell and Toy Story 3, music by Randy Newman.

Del Monte has also performed with flamenco singer Enrique Morente and the Madrid Symphony Orchestra, as well as with Lole y Manuel. Del Monte was both influenced by and inspired the younger generation of flamenco performers who were beginning to depart from the previous virtual space of Spanish flamenco. Del Monte, too, set out in new directions, integrating years of traditional and leading–edge flamenco training as well as expanding his musicianship on the classical guitar. An eclectic awareness of jazz, world music and other contemporary forms led to new, creative renditions of flamenco repertoire. He has been commissioned by the LA Guitar Quartet to compose a ‘progressive' flamenco piece entitled Cambio de Aire. He has collaborated with Yusef Lateef and the Atlanta Symphony at the National Black Arts Festival in Atlanta GA.

His flamenco debut CD on the Spanish label Sonifolk (1998), entitled Viaje a Un Nuevo Mundo-Journey to a New World-was most favorably reviewed by Spain's most acclaimed flamenco critic Angel Alvarez Caballero as well as Miguel Mora of El Pais an Alfredo Grimaldos of El Mundo.

Other discographies include a Mel Bay Artist Video Series, a classical and flamenco recital, and a GSP classical CD entitled Ezordio.

In 1998, Adam performed in Spain on the TV program Algo mas que Flamenco with Lole Montoya. He has composed a flamenco guitar concerto Ensueño Flamenco for guitar and orchestra which he premiered in Boston with the BMOP Boston Modern Orchestra Project) in Jordan Hall, conducted by Gil Rose. In 1999 he returned to Granada to perform in the oldest Peña Flamenca, La Plateria, as well as a tour in Switzerland with singer Curro Fernandez.           In February of 2000 he performed the Concierto de Aranjuez with the LA Philharmonic. In June 2000, he performed at the Hollywood Bowl, once with his flamenco ensemble and once with the Los Angeles Philharmonic and classical Spanish dancer Lola Greco. Adam performed as soloist the Concierto de Aranjuez at Disney Hall. He has also performed the Aranjuez with the Pacific Symphony with Carl St. Claire. In 2005 del Monte took part in the Los Angeles Philharmonic Chamber Music Series at Disney Hall, performing the Histoire du Tango by Astor Piazzolla with violinist Mark Kashper.

In 2008 he has performed his Flamenco Concerto and the Concierto de Aranjuez with the Ranana Symphonet, conducted by Nir Kabaretti.

First Prize Winner at the 1997 Stotsenberg International Classical Guitar Competition, Del Monte is one of the new generations dynamic force in both flamenco and classical guitar. He studied flamenco and classical guitar in Spain, Israel & England. Beginning with his father, he continued his training with such famed Gypsy performers as Pepe Habichuel", Paco Cortez, Nino Miguel &Gerardo Nunez. His classical guitar teachers were Menashe Baquiche, Israel and Gordon Crosskey at Chethams School of Music and at the Royal Northern College of Music, Manchester, England. He has also appeared as both a solo artist and group performer in major venues such as LA's Mark Taper Forum and the Wilshire Theater; the Teatro Real and the Conde Duque in Madrid; Manuel de Falla Auditorium in Granada; New Mexico St Francis Auditorium in Santa Fe; the International Guitar Festival in Israel, GFA in St Louis,'96, La Jolla,'97 and Charleston, 99 GFA, Guitar Festival, the 500th anniversary of Columbus celebrations in Paris and Madrid. Adam has been on the studio guitar department faculty at USC since 2000, where he teaches flamenco and classical guitar. He has played the Concierto de Aranjuez at Disney Hall, August 2014, with the California Philharmonic, as well as with the Sunriver festival Orchestra with conductor George Hanson in 2016. 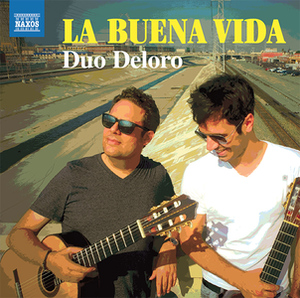 With brand new arrangements by Adam del Monte and Mak Grgic, La Buena Vida explores classics of Iberian Romanticism from Albeniz and Granados as well as promoting the vivid ethnic rhythms of Ginastera and the beautiful filmic nostalgia of Carlos Gardel, master of the tango-song. The bittersweet poetic richness of Hector Stamponi is balanced by del Monte's own original flamenco dances, which take the genre into vivid new directions. Adam del Monte and Mak Grgic make up Duo Deloro, who are in the vanguard of the new Classical/Flamenco movement.