Dhafer Youssef is a Tunisian Oud master, vocalist and composer born in November 19th, 1967 in Teboulba. The son of a modest family from this Tunisian Center-Eastern fishing village, he comes from a long line of muezzins. Mastering vocal performances is to him a heritage and a family tradition.

At an early age, his grandfather initiates him to quranic recitals. He starts discovering the potential of his voice and finds his calling. Far from quranic school benches and his grandfather's hard discipline, Dhafer Youssef tests his voice singing the songs played on his mother's radio set. His mother's kitchen becomes his first experimental laboratory, away from rigorist methods. At the age of 6, he discovers the echo of his voice and its resonances. He remembers spending hours singing in the Hammam of the local village. The resonances produced by his voice in that cavernous place fascinate him, nourishing his ardent juvenile curiosity: young Dhafer discovers his favorite toy.

Moved by the child's beautiful voice, the local muezzin encourages him to record the call to prayer for the village's mosque. Dhafer undertakes the task using a cheap plastic microphone. His voice flows from the top of the minaret. Its resonances gain altitude. It is his first encounter with an audience, an experience that will remain engraved in his memory seven studio albums and hundreds of world live performances later.

A few years later, Dhafer Youssef joins the local liturgical song troupe as a vocalist. However, this experience does not last long because of the increasing politicization of the group's activities. Far from places of worship, Dhafer now tries the Oud at the youth center in Teboulba. This is where he discovers the electric bass and the groove, which leads him to play at local weddings before joining the Radio Monastir singing troupe. Young Dhafer is selected to join the orchestra by its founder, Mesbah Souli, a violin player, member of the Tunisian National Troupe and music professor.

Aspiring to explore new horizons, Dhafer Youssef leaves his home village for the capital. In Tunis, he joins the musical conservatory at Nahj Zarkoun. Dissatisfied with the quality of teaching, he moves to Austria with the ambition to complete his musical training. The creative exaltation provided by multiculturalism in Vienna and the multiple encounters he has there open for him a new world of possibilities.

After he starts studies in musicology, Dhafer realizes that he is not interested in academic training anymore. Seduced by jazz and other musical genres such as Indian music, he takes part in numerous jam sessions and encounters at different bars and clubs with for instance Wolfgang Pusching. He finally meets Gerhard Reiter, the Austrian percussionist with whom he founds his first band, "Zeryab". In 1996, his multiple discoveries and experiences in Vienna give birth to his first album "Musafir" (The Traveler, in Arabic). This album is the result of an atypical encounter with Anton Burger, Achim Tang, Jatinder Thakur and Otto Leichner. He presents his project at Porgy & Bess, the renowned Viennese club. After a successful first night, he is offered a carte blanche and starts a series of monthly concerts at the club. There he meets Nguyen Lê, the French guitarist of Vietnamese origins but also Italian trumpeter Paolo Fresu who invites him to several performances throughout Europe.

Dhafer gains in maturity over the concerts and confirms his steady development with the release in 1998 of "Malak" under the Label Enja Records. In this album, the European jazz melodic structures meet a Mediterranean groove of a particular form. This marks the beginning of an authentic musical identity impregnated with the artist's origins without falling into typical Orientalism. Joind by Nguyen Lê on the guitar, Markus Stockhausen on the trumpet, Achim Tang on the bass and Patrice Heral on the drums, Dhafer is propelled towards an international career. Acclaimed by the critics, he goes on a successful European tour before going back to the studio with a new project.

In 2001, he records "Electric Sufi," his second album with Enja Records where he collaborates with Wolfgang Muthspiel (guitar), Markus Stockhausen (trumpet), Deepak Ram (bansuri), Dieter Ilg (bass), Mino Cinelu (percussions), Rodericke Packe (electronics) as well as Will Calhoun (drums) and Doug Wimbish (bass). In this first experiment with electronic music, the sound mixture is exalting. A result of his interest in vocal undulations and resonance, the jazzy music of "Electric Sufi" is an opportunity for the artist to experiment with his voice and use it further as an instrument. Dhafer's distinctive signature is confirmed during an inspiring tour.

Back to the studio in 2003, Dhafer Youssef records "Digital Prophecy". In this album, the search for new sounds intensifies and the result is exhilarating. The symbiosis between the Oud and electric sounds is increasingly organic, and alchemy operates between great artists from the electro-jazz Scandinavian scene: Nils Petter Molvaer (trumpet), Bugge Wesseltoft (piano), Eivind Aarset (guitar), Auden Erlien (electric bass) and Rune Arnesen (drums). As Dhafer's music acquires more height, he is nominated twice in 2003 for the BBC Awards for World Music.

After these unlikely encounters between Oud and electronic music, Dhafer Youssef sets a new challenge for himself: introducing more string instruments in his creative universe. This surreal equation is resolved with the release of "Divine Shadows" in 2005. The sound is resolutely thrilling without losing its ethereal quality. Spiritualism is asserted, manifesting itself unapologetically and far from stereotypes. The album is marked with the sounds of Arve Henriksen and Marilyn Mazur, together with Dhafer's now longtime companions Eivind Aarset, Audun Erlien, and Rune Arnesen. After the 2003 nominations for the BBC Awards for World Music, "Divine Shadows" secures Dhafer a third nomination in 2006.

After Djalal Eddine Rûmi, Al-Hallaj and other Sufi philosophers and poets that have inspired Dhafer, the artist turns to the texts of Abu Nawas, a Persian VIIIth century poet renowned for his odes to wine in a conservative society. Released in 2010, "Abu Nawas Rhapsody" is the artists' 6th album. It is also a musical manifesto which removes the barriers between the notions of sacred and profane. Accompanied with pianist Tigran Hamasyan, drummer Mark Giuliana and double bass player Chris Jennings, Dhafer Youssef goes back in this album to a more jazz and groove style. Dhafer's powerful voice is introduced subtly before starting a vigorous fusion with the instruments. Without forgetting the artistic identity that he has forged through his experience and a continuous search for sounds, Dhafer Youssef transcends genres.

Dhafer's extraordinary career is punctuated by several collaborations that have added to his experience. Dhafer thus alternates musical projects and collaborations such as a duet with the legendary tabla player Zakir Hussain with whom he performs on a sold-out tour in Europe and India, a duet with Dave Holland, and a Digital'Africa project with the great kora master Ballake Sissoko and Eivind Aarset ... These collaborations are sources of development and inspiration for the artist who is always insatiable for new sounds. This is also often an opportunity for him to meet exceptional musicians with whom he develops relationships and artistic exchanges that go beyond these collaboration to integrate his own creations. Dhafer has indeed displayed since the beginning of his career an unbridled curiosity and a constant search for renewal and discovery, which is reflected his collaborations with artists of plural origins: India, Norway, Armenia, Turkey Austria, USA, Mali...

Dhafer's talent extends to the world of film music. Critics note his outstanding performance in the soundtrack of "Black Gold" composed and conducted by the legendary James Horner in 2011. The latter invites Dhafer to a new collaboration in 2012 for the soundtrack of "The Amazing Spider-Man ". Other examples include "Luna" by Dave McKean and collaboration with Alberto Eglesias for "Gods and Kings" by Ridley Scott both in 2014.

When Dhafer Youssef receives an invitation to perform in the All-Star Global Concert on International Jazz Day 2015 it is another highlight of the artist's career. Dhafer's participation in this grand, global concert which brings together every year the living legends of jazz and world class musicians is a testimony to his talent and contribution to music. Indeed, he is today considered to be the most inventive Oud player, and a leader of the movement referred to as contemporary music, which fuses Eastern and Western music. He has managed the feat of bringing the Oud, an instrument foreign to the jazz to get it out of its traditional role and form and creatively confront it with various musical genres from electro music to jazz.

What a sign of recognition then it is for Dhafer to play that night in a duo with none other than the ambassador of International Jazz Day, master Herbie Hancock and to be later accompanied by Wayne Shorter in his rendition of "Haystan Dance."

In 2011, he invites Turkish clarinetist Hüsnü Senlendirici and Kanun player Aytaç Dogan to a performance in Ludwigsbourg-Germany.In 2013 and inspired by this encounter, Dhafer Youssef releases "Birds Requiem." The success of this album immediately praised by critics is unprecedented, with a triumphant international tour of about 100 concerts, over 50,000 records sold and performances by several orchestras including the London Symphony Orchestra. Constructed as a film soundtrack, "Birds Requiem" is a very personal album that was recorded at a turning point of the artist's life. Dhafer Youssef's voice accompanies the clarinet of Husnu Senlendirici and the Kanun of Aytaç Doğan. He also collaborates again with his comapnions Eivind Aarset on the electric guitar, Nils Petter Molvaer on the trumpet, Kristjan Randalu on the piano, Phil Donkin on the bass and Chander Sardjoe on drums. "Birds Requiem" is ranked among the ten best jazz albums in France and elsewhere, and included in the list of "Best 20 male vocalists" by DownBeat Magazine. It is a new milestone in Dhafer's career and musical research.

The atypical artistic adventure of Dhafer takes him back to New York in 2016, a city where he lived for a few years in his beginnings, and that he is particularly fond of. It is in this vibrant city that the genesis of the most anticipated album of 2016 takes place: "Diwan Of Beauty and Odd" is recorded in the legendary Sear Sound studio, with undoubtedly the finest musicians the New York jazz scene could offer: Aaron Parks on the piano, Ben Williams on the bass, Mark Guiliana on the drums and Ambrose Akinmusire on the trumpet. 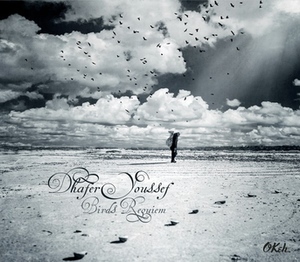 The oud-the 11-string, fretless, acoustic relative of the lute so central to the culture of the Middle East, North Africa and the Mediterranean-is inextricably tied to tradition, more than 5,000 years of it. But in the hands of Dhafer Youssef,one of the most highly respected and influential virtuosi of the instrument in the world, the oud takes a giant leap into the future. For more than two decades, Youssef has paid his respects to the ancient legacy of the oud while integrating its melodious, robust and resonant-but simultaneously delicate tones-with modern sounds and sensibilities, transcending genre and defying the expected. On his new album Birds Requiem (OKeh Records) Youssef has created his most breathtakingly powerful work to date, a suite of 11 interconnected compositions that, he says, were "constructed as music for an imagined movie."