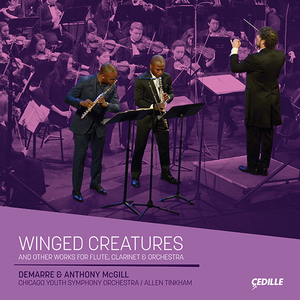 The McGills are among the few African-Americans who've held first-chair positions in major American orchestras.

The Abels-penned title work, Winged Creatures, commissioned by Cedille Records, was inspired by the flight of butterflies and other creatures. The solo parts are, in turns, delicate, frenetic, soaring, and powerful. Abels says the piece "contains a musical acknowledgement that the soloists are alumni of the orchestra accompanying them: the soloists' melody from the exposition is played by the orchestral winds in the recapitulation while the solo parts soar above them. Perhaps one of today's orchestra members is tomorrow's soloist."

The recipient of two Meet the Composer grants, Abels' credits include the critically acclaimed film score to Jordan Peele's 2017 box-office hit Get Out, the score for Peele's new thriller US, and a one-act opera commissioned and performed by Los Angeles Opera. His best-known orchestral work, Global Warming, received its world-premiere recording on Cedille Records in 2003.

Saint-Saëns' youthful, virtuosic Tarantelle, Op. 6, draws inspiration from a southern Italian folk dance. It's something of a signature piece for the McGills, who performed the piano-accompanied version on public television's Mr. Rogers' Neighborhood when they were teenagers - 18 and 14, respectively.

Hailed as "visionary" (Washington Post) and "an astonishingly original voice" (Philadelphia Inquirer), Puckett is chair of Music Theory, Ear Training, and Piano Skills at the Peabody Conservatory in Baltimore, Maryland. His new opera, The Fix, based on the 1919 Black Sox baseball scandal, recently premiered at the Minnesota Opera. The Star Tribune praised its "playful, eerily suggestive music" and proclaimed it "definitely worth seeing."

Winner of an Avery Fisher Career Grant, Demarre McGill served as principal flute of the Dallas and San Diego Symphony Orchestras, Florida Orchestra, and Santa Fe Opera Orchestra. He also recently served as acting principal flute of the Metropolitan Opera Orchestra and earlier with the Pittsburgh Symphony Orchestra.  He received his bachelor's degree from The Curtis Institute of Music and master's degree from The Juilliard School. He currently serves as visiting assistant professor of flute at Cincinnati College-Conservatory of Music. Website: demarremcgill.com

Prior to joining the New York Philharmonic and becoming that orchestra's first African-American principal player, Anthony McGill served as principal clarinet of the Metropolitan Opera. Hailed for his "trademark brilliance, penetrating sound and rich character" (The New York Times), the Curtis Institute graduate serves on the faculties of the Juilliard School, the Curtis Institute, and Bard College's Conservatory of Music. Website: anthonymcgill.com.

The CYSO's Symphony Orchestra is comprised of the most talented and dedicated student musicians in the Chicago Youth Symphony Orchestras, a multifaceted educational organization of orchestras and smaller ensembles providing music training to some 650 young musicians ages 6–18.

Launched in November 1989, Grammy Award-winning Cedille Records (pronounced say-DEE) is dedicated to showcasing and promoting the most noteworthy classical artists in and from the Chicago area.

An independent nonprofit enterprise, Cedille Records is the label of Cedille Chicago, NFP. Sales of physical CDs and digital downloads and streams cover only a small percentage of the label's costs. Tax-deductible donations from individual music-lovers and grants from charitable organizations account for most of its revenue.

Cedille Records is distributed in the Western Hemisphere by Naxos of America and its distribution partners, by Select Music in the U.K., and by other independent distributors in the Naxos network in classical music markets around the world.