"With his winning of the Pulitzer Prize for the little match girl passion (one of the most original and moving scores of recent years), Lang, once a postminimalist enfant terrible, has solidified his standing as an American master." - The New Yorker

Passionate, prolific, and complicated, composer David Lang embodies the restless spirit of invention. Lang is at the same time deeply versed in the classical tradition and committed to music that resists categorization, constantly creating new forms.

Lang is one of America's most performed composers. Many of his works resemble each other only in the fierce intelligence and clarity of vision that inform their structures. His catalogue is extensive, and his opera, orchestra, chamber and solo works are by turns ominous, ethereal, urgent, hypnotic, unsettling and very emotionally direct. Much of his work seeks to expand the definition of virtuosity in music - even the deceptively simple pieces can be fiendishly difficult to play and require incredible concentration by musicians and audiences alike.

Lang's simple song #3, written as part of his score for Paolo Sorrentino's acclaimed film YOUTH, received many awards nominations in 2016, including the Academy Award and Golden Globe.

Recent works include his opera the loser, which opened the 2016 Next Wave Festival at the Brooklyn Academy of Music, and for which Lang served as composer, librettist and stage director; the public domain for 1000 singers at Lincoln Center's Mostly Mozart Festival; his chamber opera anatomy theater at Los Angeles Opera and at the Prototype Festival in New York; the concerto man made for the ensemble So Percussion and a consortium of orchestras, including the BBC Symphony and the Los Angeles Philharmonic; mountain, commissioned by the Cincinnati Symphony, death speaks, a song cycle based on Schubert, but performed by rock musicians, including Bryce Dessner from The National and Shara Worden from My Brightest Diamond; the whisper opera, for the International Contemporary Ensemble and soprano Tony Arnold; and love fail, an evening-length work for the early music vocal ensemble Anonymous 4, with libretto and staging by Lang.

Lang's works are performed around the globe by the BBC Symphony, the International Contemporary Ensemble, eighth blackbird, Santa Fe Opera, the New York Philharmonic, the Netherlands Chamber Choir, the Boston Symphony, the Munich Chamber Orchestra, the Kronos Quartet and many others; and at festivals and venues such as Lincoln Center, the Southbank Centre, Carnegie Hall, the Kennedy Center, the Barbican Centre, the Brooklyn Academy of Music, Tanglewood, the BBC Proms, MusicNOW festival, The Munich Biennale, the Settembre Musica Festival, the Sydney 2000 Olympic Arts Festival and the Almeida, Holland, Berlin, Adelaide and Strasbourg Festivals.

His music is used regularly for ballet and modern dance around the world by such choreographers as Twyla Tharp, the Paris Opera Ballet, the New York City Ballet, Susan Marshall, Edouard Lock, La La La Human Steps, The Netherlands Dance Theater, and Benjamin Millepied, who choreographed a new piece by Lang for the LA Dance Project at BAM in 2014.

Lang's film work includes the score to Paolo Sorrentino's YOUTH, and for Jonathan Parker's (Untitled), the music for the award-winning documentary The Woodmans, and the string arrangements for Requiem for a Dream, performed by the Kronos Quartet. His music is also on the soundtrack for Paolo Sorrentino's Oscar-winning La Grande Bellezza.

Lang is the recipient of numerous honors and awards, including the Pulitzer Prize, an Academy Award and Golden Globe nominations, Musical America's Composer of the Year, Carnegie Hall's Debs Composer's Chair, the Rome Prize, the BMW Music-Theater Prize (Munich), and grants from the Guggenheim Foundation, the Foundation for Contemporary Performance Arts, the National Endowment for the Arts, the New York Foundation for the Arts, and the American Academy of Arts and Letters. In 1999, he received a Bessie Award for his music in choreographer Susan Marshall's The Most Dangerous Room in the House, performed live by the Bang on a Can All-Stars at the Next Wave Festival of the Brooklyn Academy of Music. The Carbon Copy Building won the 2000 Village Voice OBIE Award for Best New American Work. The recording of the passing measures on Cantaloupe Records was named one of the best CDs of 2001 by The New Yorker. His CD pierced on Naxos was praised both on the rock music site Pitchfork and in the classical magazine Gramophone, and was called his "most exciting new work in years" by the San Francisco Chronicle. The recording of the little match girl passion released on Harmonia Mundi, received the 2010 Grammy Award for Best Small Ensemble Performance.

Lang is co-founder and co-artistic director of New York's legendary music collective Bang on a Can. His work has been recorded on the Sony Classical, Harmonia Mundi, Teldec, BMG, Point, Chandos, Argo/Decca, and Cantaloupe labels, among others.

His music is published by Red Poppy Music (ASCAP) and is distributed worldwide by G. Schirmer, Inc. 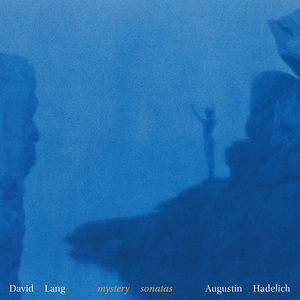 Commissioned for Hadelich by Carnegie Hall, mystery sonatas premiered in April 2014 in Zankel Hall, where it was praised by The New York Times as a display of "magisterial poise and serene control." Lang, who held Carnegie Hall's Richard and Barbara Debs Composer's Chair at the time, conceived the piece as a modern reinvention of Heinrich Ignaz Franz von Biber's Mystery Sonatas. While von Biber's Sonatas expressed his inward thoughts on Christian theology and the Mystery of Christ, Lang's take is decidedly secular.

"I decided to make my own virtuosic pieces about my most intimate, most spiritual thoughts," Lang explains, "[but] mine are not about Jesus, and the violin is not retuned between movements. I did keep one of Biber's distinctions. He divides Jesus's life into three phases-the joyous, the sorrowful, and the glorious. The central pieces of my mystery sonatas are called ‘joy,' ‘sorrow,' and ‘glory,' but these are all quiet, internal, reflective states of being."