Only a select few artists have the ability to convey their message to the back row, to galvanize an audience with a visceral power that connects on a universal level. David Krakauer is such an artist.

Widely considered one of the greatest clarinetists on the planet, he has been praised internationally as a key innovator in modern klezmer as well as a major voice in classical music. In 2015 he received a Grammy nomination in the Chamber Music/Small Ensemble category as soloist with the conductorless orchestra A Far Cry, and a Juno nomination for the CD Akoka with cellist Matt Haimovitz.

Over the past decade Krakauer has emerged as an electrifying symphonic soloist who brings his singular sound and powerful approach to the concert stage. He has appeared with the world's finest orchestras including the Amsterdam Sinfonietta, Baltimore Symphony, Brooklyn Philharmonic, Detroit Symphony, the Weimar Staatskapelle, the Orchestre de Lyon, the Phoenix Symphony, the Dresdener Philharmonie, and the Seattle Symphony.

Widely considered one of the greatest clarinetists on the planet, David has been praised internationally as a key innovator in modern klezmer as well as a major voice in classical music.

Highlights of Krakauer's lauded career include performances with the Kronos, Emerson, Tokyo, Orion, and Miro String Quartets; performing during the inaugural season of Carnegie Hall's Zankel Hall with renowned jazz pianist Uri Caine; an eight-­year tenure with the Naumburg Award-­winning Aspen Wind Quintet tours and recordings with Abraham Inc which he co-­leads with Socalled and Fred Wesley and performing in the International Emmy Award-­winning BBC documentary Holocaust, A Music Memorial from Auschwitz.

Krakauer's discography contains some of the most important clarinet recordings of recent decades. Among them are The Dreams and Prayers of Isaac the Blind (Osvaldo Golijov and the Kronos Quartet/Nonesuch), which received the Diapason D'Or in France, The Twelve Tribes (Label Bleu) which was designated album of the year in the jazz category for the Preis der Deutschen Schallplattenkritik, and Paul Moravec's Pulitzer Prize-winning composition Tempest Fantasy (Naxos). He has also recorded with violinist Itzhak Perlman/The Klezmatics (Angel) and Dawn Upshaw/Osvaldo Golijov (Deutsche Gramophon). His unique sound can be heard in Danny Elfman's score for the Ang Lee film Taking Woodstock and throughout Sally Potter's The Tango Lesson. New releases include his 2015 album Checkpoint with his band Ancestral Groove (Label Bleu), Paul Moravec's Clarinet Concerto with The Boston Modern Orchestra Project (BMOP sound), and The Big Picture on his own label, Table Pounding Records in 2014.

An avid educator, David Krakauer is on the clarinet and chamber music faculties of the Manhattan School of Music, the Mannes College at the New School, and the Bard Conservatory. 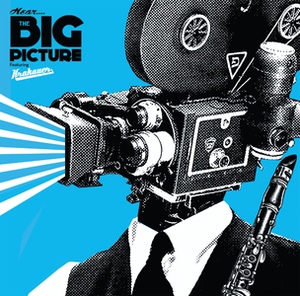 The Big Picture explores the inseparable relationship between music and movies while reminding the audience of their incomparable contribution as co-stars. Clarinetist extraordinaire David Krakauer's otherworldly interpretations of the music found in a myriad of moviegoer favorites including Sophie's Choice, Life is Beautiful, The Pianist, Radio Days, and more, will transport the audience to the shores of their memory banks while expanding their appreciation of one of life's great couples - music and movies.