Three-time Grammy nominee David Chesky has earned great respect for his fresh and unique approach to musical compositions, which span the jazz and classical genres. Captivating audiences around the world, The New York Times raves, "Chesky combines a gritty sophistication with street-level energy and currents of exotic folkishness." As a composer of orchestral works, operas and ballets, an author of children's books, a jazz pianist and a world-renowned innovator of audio technologies, Chesky redefines the role of a modern-day renaissance man. Critics describe his music as "highly individualistic," "memorable," "dynamic" and "exotic."

In his 2010-2011 season, Chesky served as the Composer-in-Residence for the National Symphony of Taiwan, where he gave his world premiere of New York Variations. His comedic adult opera, The Pig, the Farmer, and the Artist also premiered at the New York Fringe Festival, leaving audiences in laughter-filled tears. Opera News praised that "Chesky could turn out to be a one-man Brecht-Weill for the twenty-first century." Last year also saw the release of his two new albums, Urbanicity and String Theory, both of which received critical acclaim. Classics Today said of the latter, "This music has integrity, and it gets under your skin."

In 2012-2013 Chesky won the prestigious Lancaster Symphony composer award. Chesky released his solo piano album The New York Rags, that The Absolute Sound cited "as being one of the best piano albums ever recorded". In addition two other CDs will be released in 2013, Chesky's jazz quintet, Jazz in the New Harmonic that fuses 21st century classical harmony with the urban grooves of Jazz and his children's orchestral ballet the Zephyrtine.

Best known for his thrilling and driving "Urban Orchestral" music, a term which he himself coined, Chesky has developed his own unique style of composition, merging classical techniques with sounds emanating from the streets of New York. Critics praise his unique style noting, "Chesky fuses diverse influences into a musical language all his own." (Gramophone Magazine) Chesky has composed concertos for electric guitar, violin, and cello, featured on his 2011 albums Urbanicity and String Theory.

Chesky, in recent years, has ventured into the world of comic opera. His controversial and cutting edge The Pig, the Farmer, and the Artist, garnered the highest acclaim from both opera and theater critics after premiering at the New York Fringe Festival. His newest opera, Juliet & Romeo, is a ‘what if' comedy about Shakespeare's two lovers if they were to have the chance to live out their lives and marry one another. Juliet & Romeo is set to be released later this year.

In 2009, the Alvin Ailey American Dance Theater commissioned Chesky's ballet, Hope, taking it on tour all over the United States. In addition to Hope, Chesky has four other ballets including his children's ballet, The Zephyrtine, and The Central Park Dances, Urbanicity and The New York Variations; all three of which are wild reflections of modern life in a fast city.

Chesky is committed to fostering music education in young children, fully aware that our audiences tomorrow depend on introducing classical music to today's youth. Consequently, Chesky created the album Classical Cats™, a fun, endearing story that gives children an introduction to the orchestra and classical music, awarded Dr. Toy's Recognition of Excellence. In 2011, his children's opera, The Mice War, was presented at The National Theater of Taiwan in Chinese to sold-out audiences. With such a positive response, the libretto is now being translated into Polish, Italian and Portuguese, and is set for DVD release later this year. Chesky is also the author of The Snowbears of Lake Louise™, a book that educates children about the importance of preserving the environment.

Miami native Chesky moved to New York in 1974 to officially begin his career as a musician. With an interest in both classical and jazz, he immediately began studying composition with Pulitzer Prize winner, David Del Tredici, and piano with John Lewis of the Modern Jazz Quartet. His blending of genres was first reflected in the culmination of his big band, The David Chesky Big Band, where he performed at every major jazz club and festival including; The Village Vanguard, Storyville, and the Newport, JVC and Monterey Jazz Festivals. Still active as a jazz pianist today, Chesky plays and composes for his new group, Jazz in the New Harmonic, incorporating 12-tone and contemporary classical harmonies into jazz, and his Grammy nominated Latin-jazz fusion, The Body Acoustic.

David is the founder of the audiophile label Chesky Records. Considered as one of the preeminent audiophile record labels among critics, Chesky Records has produced over 500 albums with highly accomplished artists in genres spanning classical, jazz and world music. Chesky Records produces the highest quality of recordings available today. David is on the forefront of audio technology; having created the world's first 128x oversampled recordings, 96kHz/24bit recordings, and created the 6.0 multichannel 192kHz/24bit DVD-Audio Disc layout. 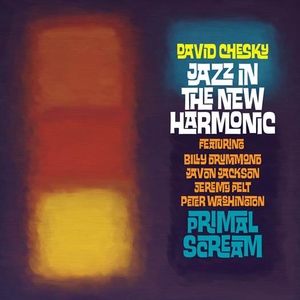 Once again pianist/composer David Chesky courts a dark, masterful muse on this second recording by his Jazz in the New Harmonic quintet. The noirish atmosphere prevails from his first dissonant stabs at the keyboard with cool solos from veteran jazz artists Javon Jackson and Jeremy Pelt, while Peter Washington and Billy Drummond lock down the time. This is a different kind of cool jazz, one that grooves along steadily. Close your eyes and you can feel the pulse of the New York streets colliding with 21st century ethereal classical harmony.

Jazz in the New Harmonic