David Sulzer is a neuroscientist and Professor at Columbia University in the Departments of Psychiatry, Pharmacology and Neurology. Under the name Dave Soldier, he is a classical, pop, jazz musician and composer, appearing on over 100 CDs and film scores. Among his work that combines both identities are the Thai Elephant Orchestra which is a 14 piece orchestra of elephants in Thailand; the cult Delta punk band - the Kropotkins, the Brainwave Music Project with Brad Garton that allows musicians to perform using their brain's electrical activity; a series of pieces that use mathematics or statistics to create new repertoire including the notorious "The People's Choice: The Most Unwanted Music"; and multiple projects coaching children to compose their own music in Harlem, Brooklyn, and Guatemala. Soldier has performed as violinist, guitarist, and composer/ arranger with Bo Diddley, John Cale, Kurt Vonnegut, and many others, appearing on nearly 20 CD's featuring his compositions for classical and jazz musicians. With chemist Roald Hoffmann, he runs a monthly science meets art series, Entertaining Science, at the Cornelia Street Cafe in Greenwich Village. 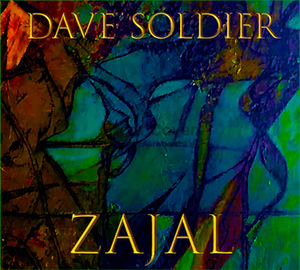 Zajal, renowned Downtown composer and instrumentalist Dave Soldier explores the beginning of popular song and locates it 1000 years ago at the intersection of Muslim, Jewish, and Christian cultures in southern Spain. Zajal, along with muwashaha, were the lyrics of medieval Andalusia. While many are still sung today (notably in Lebanon), their offspring are everywhere. On a trip to Spain in 2004, Soldier read about the Andalusian caliphate, when the Muslim, Christian and Jewish com- munities not only coexisted, but co-created much of the world we inhabit today. Together, they produced the novel, cowboy culture, the guitar, the dance suite, the Kabbalah, Maimonides and ibn Arabi and the discovery of the New World. And modern song: the zajal and muwashaha introduced the verse and chorus that are the backbone of popular music. Imitation of Andalusia's singing oud players begat the troubadours and the figure of the wandering poet and singer in its myriad incarnations, from Villon to Joni Mitchell.