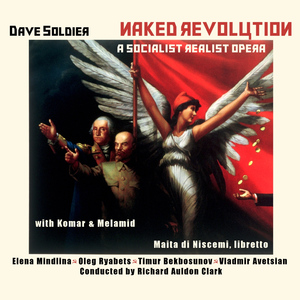 Released for the one hundredth anniversary of the Soviet Revolution's toppling of the statue of Czar Alexander II at the Kremlin, this is the premiere recording of the socialist realist opera Naked Revolution by composer Dave Soldier with the Russian émigré satirical artists Komar & Melamid.

The work was premiered at the Walker Arts Center in Minneapolis and the Kitchen in New York City in 1997. The central conceit was drawn from a series of dreams by Russian immigrants to New York (and in fact were dreams by Vitaly Komar). A collection of satirical heroic paintings in the socialist realist style, American Dreams, were created with the opera and toured museums and galleries and released as an art book: the CD cover and additional art in the CD are from this collection.

As the opera was written, statues of Lenin and other Soviet heroes were being torn down throughout the former U.S.S.R.  The team asked Maita di Niscemi to prepare a libretto drawn from history and the dreams.

In Act I, in New York City, 1776, Molly Pitcher and the mob tear down the statue of King George III that stood in Battery Park following the announcement of the Declaration of Independence, and General Washington orders it melted for bullets.

In Act II, Russia, 1917, the mob, inspired by Lenin's speech at Smolny Institute tears down the statue of the Tzar Alexander II in the Kremlin.

In Act III, Washington Square Park in Greenwich Village through the  20th century, Lenin sings a trio with the two statues of Washington in the Park's arch, is baited by a mime, Marcel Duchamp (who declared the Independent Republic of Greenwich Village atop the Arch in 1917), and is purused by the dancer Isadora Duncan (who idolized Lenin and founded an idealistic dance school in Moscow in 1921). As a finale, a mob of contemporary Americans don masks of Washington's face on the dollar bill, tauningt "this is our country, our world, our century! We're taking it back!"; and Lenin, under a McDonald's sign in 1989, hails a taxi to exit.

About Dave Soldier with Komar & Melamid

During the 1990's the team produced multiple collaborative projects. The best known is "The People's Choice: Music", released in 1997, when they polled the population on what they loved and hated in music, and created "The Most Wanted Song" and "The Most Unwanted Song".  Another led to the "Thai Elephant Orchestra", an orchestra of improvising elephants in Northern Thailand.

About Dave Soldier - Composer Dave Soldier studied composition as a teenager with Roscoe Mitchell and later with Otto Luening and the Juilliard Night School. Out of high school, he toured the US playing violin in a western swing group, and over the decades played guitar with Bo Diddley, and performed, recorded, and arranged for a wide array of artists and styles, ranging from the Velvet Underground to Pete Seeger, and appears on over 100 CDs. As he was doing this, he earned a PhD in biology from Columbia University, and since 1995 as David Sulzer has led a neuroscience laboratory at the Columbia University Medical Center, where he works on the basis of learning and memory, and diseases including autism and Parkinson's.

Soldie's career as a composer spans over thiry years. In 1984, he founded the Soldier String Quartet, perhaps the first group to integrate punk and R&B into the classical and downtown music worlds. In addition to Soldier's own compositions, the group recorded with Leroy Jenkins, Tony Williams and Bill Laswell, Phill Niblock, Elliott Sharp, Guided by Voices, and was the backup group for John Cale (1992-1998). The quartet repertoire was recently released as a 3 CD set, In Four Color, , and features and features Regina Carter  and the contemporary PubliQuartet.

Soldier recently released a second opera, The Eighth Hour of Amduat (2015), featuring Italian translations from the world's oldest sound score, from 5000 years ago in Egypt. Along with choir and orchestra, it features solos by the leader of the Sun Ra Arkestra, Marshall Allen. These two are his only operas, but his many other musical theater works include two in collaboration with the late Kurt Vonnegut, Ice-9 Ballads, and a radio opera, A Soldier's Story. He recently released settings of satirical poems by Jonathan Swift, Dean Swift's Satyrs for the Very Very Young, sung by the British folk singer Eliza Carthy.

Much of Soldier's work has a conceptual \ bent. These include The People's Choice (The Wold's Must Unwanted Music) (1997) with Komar and Melamid based on a poll of musical likes and dislikes  and the Thai Elephant Orchestra, an orchestra of up to 14 elephants in northern Thailand for which Soldier built giant musical instruments and who released three CDs (2000-2011). He coached children to compose their own music in Harlem, Brooklyn, and the Mayan mountains of  Guatemala, releaseing multiple CDs of these pieces on the Mulatta record label.

The Brainwave Music Project, which released a CD in 2017 uses electroencephalograms (EEGs) to compose/improvise. In rocfk music, he founded the Delta punk rock band, the Kropotkins, and presently performs in Soldier Kane, a duo with drummer and Swans co-founder, Jonathan Kane, and in the jazz world, Soldier often performs with drummer / band leader, William Hooker.

He teaches a course at Columbia, Music, Math, and Mind, on the physics and neurological perception of music, and is currently writing a  book for the lay publc=ic based on this class for the Columbia University Press.

About Komar & Melamid - Dubbed "exasperating expatriates" for their relentless, wry mockery of the social, political, and artistic systems of the former Soviet Union, Vitaly Komar and Alex Melamid met as art students in Moscow, and teamed up in 1965. They worked together until 2004, creating an outpouring of paintings, sculptures, installations, performances, public projects, photographs, music, and poetry, charged with keen criticisms of Communism, consumerism, the art market, and other human excesses. In 1967, they founded the SOTS Art Movement, a mash-up of socialist realism, dada, conceptualism and pop art. "If pop-art was born by the overproduction of things and their advertising, then Sots Art was born of the overproduction of ideology and its propaganda, including visual propaganda," Komar once explained. Both artists took part in the notorious ‘Bulldozer Exhibition' held in a vacant plot in Moscow's Belyayevo in 1974, which showcased nonconformist art by Moscow avant-garde artists that was swiftly destroyed by the authorities with bulldozers and water cannons. In 1978, they defected from the USSR and moved to America, where they could freely pursue their subversive vision.

In the 80's, they continued developing their SOTS Art (Nostalgic Socialist Realism Series, May 1st Installation at the Palladium Disco) and Post-Art (Diary Series, Anarchistic Synthesis Series, Bayonne, N.J. Series). They were the first Russian artists to receive funding from the National Endowment for the Arts, and the first Russian artists to be invited to the Documenta 8 (Kassel, Germany, 1987). They devote their projects in the 90's to iconoclasm (Monumental Propaganda, American Dreams, which was created with Naked Revolution), democracy and elitism by statistics (People's Choice), and ecology (collaboration with Animals, Asian Elephant Project). Komar & Melamid's last collaborative projects were devoted to art as a religion and to the synthesis of irony and spirituality (Van Gogh Art Ministry, Symbols of the Big Bang).

They can be found in Oxford's Dictionary of 20th Century Art; The Penguin Concise Dictionary of Art History; Art Since the 40's; Bildende Kunst im 20 Jahrhundert; and Phaidon's The 20th–Century Art Book.

Librettist Maita di Niscmei, born in Italy and a long time resident of New York,  is a long time collaborator of Robert Wilson, who wrote for Edison, Death Destruction and Detroit, and with Philip Glass, Civil War, and has authored book s on houses in Siciliy and Swden. She prepared this libretto at the New York Publc Library.

Oleg Ryabets (Lenin), countertenor, was born in 1967 in Kyiv, Ukraine and studied at Kyiv State Conservatoire and at State Classical Academy in Moscow.  He made his debut as a soprano soloist in 1990 with the soprano part in Symphony No.2 by Alfred Schnittke with The Grand Symphony Orchestra under Gennady Rozhdestvensky at the Grand Hall of Moscow State Conservatoire. He performs lead parts in baroque, classical and contemporary operas, including Gandarte in "Alessandro nell'Indie" by J.Ch.Bach, Enea in "Enea nel Lazio" by G.Sarti, Amore in "Orfeo ed Euridice" by C.W.Gluck, Irina in "Three Sisters" by Péter Eötvös, Count Myshkin in "N.F.B." by Vladimir Kobekin, Lenin in "Naked Revolution" by Dave Soldier, Gustav IV in "Tsarina" by David Tukhmanov. On October 17, 1994 he sang special concert dedicated to the first and only official visit of Queen Elizabeth II to Russia. In 1996 he sang in London (at the celebration of the 75th anniversary of Prince Philipp, who conferred Oleg with the title "Mister Soprano" after his performance. Ryabets' voice has a quality and range ( a – c''' ) quite rare among countertenors. Recording of his voice is preserved at the British National Sound Archive in London (England) together with the only recording of the last known castrato singer, Alessandro Moreschi.

Elena Mindlina (Molly Pitcher, Baba Yaga, Vera Pavlovna, Isadora Duncan), from Russia and now living in Queens,  recently toured Russia with newly discovered songs of Nikolai Tcherepnin including at Moscow Conservatoire Rachmaninov Hall, St. Petersburg Conservatoire Glazunov Hall and Saratov Conservatoire Great Hall. In New York Ms. Mindlina performs at Town Hall, Symphony Space, Lincoln Center's Merkin Hall, and the Masterclass series for Joy in Singing at Bruno Walter Auditorium at The NYPL for the Performing. Dr. Mindlina received her early musical education in Russia. She received her first Master's degree in violin from the Saratov State Conservatoire. In 2006, she came to New York to study at the American Musical and Dramatic Academy in Manhattan. A recipient of the Full Scholarship from S.U.N.Y Stony Brook, she received a second Master's in classical voice in 2010 and became a Doctor of Musical Arts in 2014.

Timur Bekbosunov (Aexnder Ulyanov, Citizen George Washington), tenor, "extravagantly transgressive tenor" with "stratospheric voice" (LA TIMES), is a Kazakh-American singer of contemporary and cross-cultural music. He has made solo appearances with the LA Philharmonic, Bang on a Can All-Stars, Sarasota Opera, Santa Cecilia Academy, Opera Philadelphia, and the PROTOTYPE Festival, Timur collaborated with Anne LeBaron on her large-scale musical project about Kazakhstan, Silent Steppe Cantata. He leads the amazing glam-rock band Timur and the Dime Museum. Timur curated and produced Mostly Menotti Festival with Gian-Carlo Menotti .He is a graduate of WSU, NEC, USC and CalArts and a faculty member at The Herb Alpert School of Music at the California Institute of the Arts.

Vladmir Avetsian (General Geroge Washington), bass baritone, is from Russia and recently moved to New York where he is studying the opera repertoire.

Yuri Lemeshev (accordion) moved with his family to the USA in 1989 hoping to find more freedom for his musical projects ("I couldn´t play Jazz in the Soviet Union") and  became a resident of Brooklyn where the streets are full of music from immigrants. He was the accordionist on the Late Night Show with Conan O´Brien and performed with the Gypsy punk band Gogol Bordello from 2001-2013. He now specializes in the music of Russian composer Alfred Schnittke.

DAVE SOLDIER, composer, with the collaboration of artists KOMAR & MELAMID

Produced and Engineered by Rory Young and Sam Palumbo