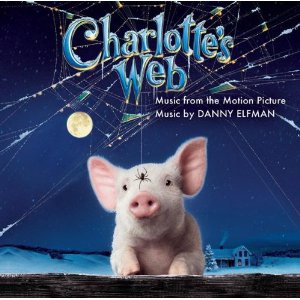 In the classic tale of Charlotte's Web from writer E.B. White, someone very small finds that the most powerful force in the world is friendship. In the big-screen adaptation, the characters embark on a journey of friendship and bonding when Charlotte, the wise spider who lives in the rafters, befriends Wilbur, a pig and the runt of the litter. Wilbur has a youthful manner that makes him seem naive to the other animals in his new barn, but to Charlotte – the spider who lives in the rafand  Wers – he is a welcome friend. Their friendship is shown to be a lasting one when some of the other farm animals reveal that the pig's days are numbered. It seems that only a miracle will save Wilbur's life and Charlotte does make miracles happen when she spins words into her web in an effort to convince the farmer that Wilbur is "some pig" and worth saving.  E.B. White's magical, beloved story of loyalty and sacrifice comes to life in this live-action adaptation.

Dakota Fanning stars as Fern Arable, the first person to see Wilbur for the the terrific, radiant, and humble pig he is. Julia Roberts is the voice of Charlotte, who becomes Wilbur's best friend and savior. Also joining as cast voices for Charlotte's Web are Steve Buscemi as the barn's sardonic rat, Templeton; Oprah Winfrey as Gussy, the barn's maternal-yet-irreverent goose; Cedric the Entertainer as Golly, Gussy's gander; John Cleese as Samuel, the authoritative sheep; Robert Redford as Ike, the arachnophobic horse; Kathy Bates and Reba McEntire as the barn's sarcastic cows, Betsy and Bitsy; and Thomas Haden Church and Andr? Benjamin as the dimwitted crows, Brooks and Elwyn.

Accentuating the emotional and triumphant tale of friendship is the poignant original score from Danny Elfman. Following the twists and turns of each character, Elfman's music captures the atmosphere and sentiment of the film from the inspirational to the comical to the heartfelt with his lively inimitable style.

Charlotte's Web is Elfman's third soundtrack on the Sony Classical label, joining Big Fish (2003) and Planet of the Apes (2001).  It follows the label's release this fall of the debut recording of Serenada Schizophrana, the composer's first large-scale symphonic work.

The Charlotte's Web soundtrack also includes the touching end-title song "Ordinary Miracle," performed by Grammy Award winner Sarah McLachlan, and written by Dave Stewart and Glen Ballard. Stewart, best known for his work with Annie Lennox in the Eurythmics, has been described as a "fearless innovator" by his friend and collaborator, the musical legend Bob Dylan. Ballard is a veteran songwriter/record producer best known as the producer of Alanis Morissette's landmark album Jagged Little Pill.

One of the most sought-after composers in Hollywood, Elfman has brought his versatile, highly distinctive sound to many of the definitive films of the age, winning Oscar nominations for his scores for director Tim Burton's Big Fish in 2003, and Good Will Hunting and Men in Black in 1997, as well as a Grammy Award in 1989 for his theme for Burton's Batman.   His celebrated partnership with Burton also has included acclaimed scores for Charlie and the Chocolate Factory, Corpse Bride, Planet of the Apes, Sleepy Hollow, Mars Attacks!, The Nightmare Before Christmas, Batman Returns, Edward Scissorhands, Beetlejuice and Pee Wee's Big Adventure.

Elfman's credits include scores for a diverse array of films, among them Spider-Man, Spider-Man 2, Nacho Libre, Chicago,  Red Dragon, Men in Black II, A Simple Plan, Dolores Claiborne, Mission Impossible, To Die For, Dead Presidents, Sommersby, Darkman, Dick Tracy and Midnight Run.  For television, he created the infectious themes for The Simpsons and Desperate Housewives, the latter winning him a 2005 Emmy Award.

Danny Elfman's first experience in performance and composition was for a French theatrical troupe, Le Grand Magic Circus, at the age of 18.  The following year, he collaborated with his brother Richard, performing musical theater on the streets of California.  Elfman then worked with a surrealistic musical cabaret for six years, using this outlet to explore multifarious musical genres.  For seventeen years he wrote and performed with his rock band Oingo Boingo, producing such hits as "Weird Science" and "Dead Man's Party."