The violinist Daniel Hope has toured the world as a virtuoso soloist for 30 years and is celebrated for his musical versatility as well as his dedication to humanitarian causes. Winner of the 2015 European Cultural Prize for Music, whose previous recipients include Daniel Barenboim and the Berlin Philharmonic Orchestra, Daniel Hope appears as soloist with the world's major orchestras and conductors, also directing many ensembles from the violin. Since the start of the 2016/17 season Hope is Music Director of the Zurich Chamber Orchestra – and from the 2018/19 Season also Music Director of the New Century Chamber Orchestra in San Francisco.

In 2019 he became Artistic Director of the Frauenkirche Cathedral in Dresden, and from 2020 he is the President of the Beethovenhaus Bonn, an honorary position following in the footsteps of Kurt Masur and Joseph Joachim.

Daniel Hope was raised in London at Highgate School and the Royal Academy of Music, studying the violin with Zakhar Bron, Itzhak Rashkovsky and Felix Andrievsky. The youngest ever member of the Beaux Arts Trio with whom he performed over 400 times during its final six seasons, today Daniel Hope appears at all the world's greatest halls and festivals: from Carnegie Hall to the Concertgebouw Amsterdam, from Salzburg to Schleswig-Holstein and from Aspen to the BBC Proms and Tanglewood. He has worked with conductors including Kurt Masur, Valery Gergiev and Christian Thielemann, and with the world's greatest symphony orchestras including Berlin, Boston, Chicago, Paris, London, Los Angeles and Tokyo. Devoted to contemporary music, Hope has commissioned over thirty works, enjoying close contact with composers such as Alfred Schnittke, Toru Takemitsu, Harrison Birtwistle, Sofia Gubaidulina, György Kurtág, Peter Maxwell-Davies and Mark-Anthony Turnage.

Daniel Hope is one of the world's most prolific classical recording artists, with over 25 albums to his name. His recordings have won the Deutsche Schallplattenpreis, the Diapason d'Or of the Year, the Edison Classical Award, the Prix Caecilia, the ECHO-Klassik Award and numerous Grammy nominations. His album of Mendelssohn's Violin Concerto and Octet with the Chamber Orchestra of Europe was named one of the best of the year by the New York Times. His recording of Alban Berg's Concerto was voted Grammophone Magazine's "top choice of all available recordings". His recording of Max Richter's Vivaldi Recomposed, which reached No. 1 in over 22 countries is, with 250,000 copies sold, one of the most successful classical recordings of recent times. Hope has been an exclusive Deutsche Grammophon artist since 2007.

In 2017 the documentary film "Daniel Hope – The Sound of Life" was screened in European cinemas as well as in Movie Theatres in Australia and North America.

Daniel Hope has penned four bestselling books published in Germany by the Rowohlt publishing company. He contributes regularly to the Wall Street Journal and has written scripts for collaborative performances with the actors Klaus Maria Brandauer and Mia Farrow. In Germany he presents a weekly radio show for the WDR3 Channel and curates, since the 2016/17 season his own salon "Hope@9pm", a music and talk event with guests from culture and politics at the Konzerthaus Berlin.

Daniel Hope plays the 1742 "ex-Lipínski" Guarneri del Gesù, placed generously at his disposal by an anonymous family from Germany.

He holds both Irish and German citizenship and resides with his family in Berlin.

Alexey Botvinov is an exceptional pianist, musical activist and producer. The most famous Ukrainian pianist, Botvinov is one of the best specialists in Rachmaninoff music worldwide. Botvinov is the only pianist who performed Bach‘s „Goldberg Variations" more than 300 times on stage.

Alexey Botvinov performed in over 45 countries. National Artist of Ukraine, in his country's press he enjoys such words like "symbol of high spirit" or "true mark for authentic sense of music". Alexey Botvinov was born in all-musicians family in Odessa, where he studied with Prof. Mogilewskaja and later at the Conservatory of Odessa with Prof. Kardaschew. 1987-89 he was a student at the Moscow Conservatory with famous Prof. Gornostayeva. His last mentor was legendary pianist Alexis Weissenberg. Botvinov is a prize-winner of such important piano competitions as the 1st Rachmaninoff-Competition in Moscow, the 8th International Bach-Competition in Leipzig and the 1st Clara-Schumann-Competition in Düsseldorf. In 1993 he played Tchaikovsky's First piano concerto for the opening of the concert season at the Tonhalle Zürich with the Radio Symphony Orchestra Moscow under the baton of Vladimir Fedoseyev, which was highly acclaimed by the press and by the audience.

During the years 1994-96 Alexey Botvinov lived in Düsseldorf (Germany), where he performed Bach's "Goldberg-Variations" and Schumann's "Kinderszenen" with the ballet productions by the famous Swiss choreographer Heinz Spoerli. Meanwhile artistic cooperation with Heinz Spoerli continued in Zurich from 1996 to 2012 with over 20 different ballet productions at music by Bach, Mozart, Schumann, Brahms, Chopin, Schnittke, Stravinsky etc. with great acclaim. Pianist was on many tours with the Zurich Balett in Germany, Austria, Switzerland, Italy, France, Spain, Great Britain, Russia, Japan, Canada, South Africa, China etc.

For his breathtaking performance of "Goldberg-Variations" ballet in June 2001 at the Deutsche Oper Berlin the press wrote: "a real firework at the piano" ("Berliner Kurier"). "Le Figaro" wrote about pianist's CD of "Goldberg-Variations" - "Superbe!" . This recording landed on 2nd place in Swiss music-charts. Next recording- "Botvinov plays Rachmaninoff" (2002) was acclaimed as " the best classical recording of the month" in Switzerland.

The recitals he played in such festivals as Chopin Festival in Poland or Züricher Festspiele were given standing ovations and enthusiastic acclaims by the press. In summer 2003 Alexey Botvinov was nominated Artist in Residence at the Murten Classics Festival (Switzerland) with 8 concerts. In 2005 he played his debut recital at the Wigmore Hall London and in 2006 – at the Berlin Philharmony.

During 2006 he was on long tours in China with Zurich Chamber Orchestra and with Koenigliche Philharmonie Flandern in Belgium and Germany. Every concert of piano recital Asian tour in October 2007 (Hong Kong, Singapore, Kuala Lumpur, Jakarta, Taiwan) was finishing with standing ovation.

Recently Botvinov explores new ways of presenting classical music. Among his new innovative projects there are "Piano Light Show" and "4 Elements", where music and visual effects have converted a traditional concert into an amazing multimedia mystery.Projects were presented 2009 in Moscow, then many times in Kiev, Odessa (over 20.000 spectators in Ukraine) and from 2019 in Switzerland and Germany. More concerts of "Piano Light Show" in Europe are in planning.

2011 Botvinov created another highly innovative project – synthesis of Drama Theater and classical concert. Basing on new novel of a leading modern Russian writer M. Shishkin "The Light and the Dark", Botvinov made his debut as a theater director in art-project, where his solo performance harmonizes on stage with two drama actors. Project was highly successful in Russia and Ukraine, and later in German-speaking version at several Swiss theaters.

2015 Botvinov initiated a new International Music Festival "ODESSA CLASSICS", where he is President and artistic director. Annual Festival is sensational success and already became the most important classical music festival in the Ukraine and one of the leading festivals in Eastern Europe.

November 2015 Alexey Botvinov was awarded the title "People's Artist of Ukraine" – the highest artistic achievement in the Ukraine.

In 2020 Alexey Botvinov became a "Knight of the Order of the Star of Italy" by decision of the President of the Italian Republic Sergio Mattarella.

Schnittke - Works for Violin and Piano 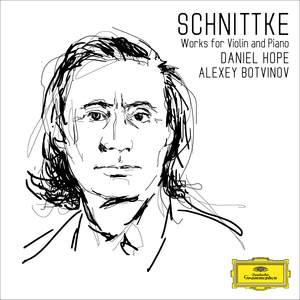 Daniel Hope was fifteen when he first encountered the music of Alfred Schnittke in 1989. The experience launched a love affair with the Russian composer's work that has continued to deepen ever since. The violinist's latest album for Deutsche Grammophon pays homage to this maverick genius, whose elegant explorations of past styles and free-thinking experiments in "polystylism" were both original and iconoclastic, at times bringing him into conflict with the Soviet authorities.

Schnittke – Works for Violin and Piano, set for international release on 5 February 2021, was recorded with Ukrainian pianist Alexey Botvinov, an acclaimed interpreter of the composer's works. The programme embraces everything from the immediately accessible Polka and Tango to the multi-layered Violin Sonata No.1, the work that first ignited Hope's passion for Schnittke's music.

Schnittke - Works for Violin and Piano