"The human voice is so powerful," says Cory Henry. "When I'm singing, it's like this extra way of connecting and communicating with people beyond what I can do just playing the organ. I'm able to convey these messages that are really important and meaningful to me through my words. Being front and center like this every night, it's a challenge, but I'm up for it."

On his latest debut album with The Funk Apostles, ‘Art of Love,' organ virtuoso Cory Henry demonstrates that he's more than up for the challenge, moving from sideman to frontman with seemingly effortless grace and cool. Praised by AllMusic as "one of the finest Hammond B-3 organ players of his generation," Henry also proves himself to be a remarkable singer and songwriter here, one of extraordinary depth and vision. He and the band whip up an intoxicating blend of blues, soul, R&B, Afrobeat, gospel, and jazz on the record, blurring genres and upending expectations at every turn. Simultaneously futuristic and retro, experimental and classic, it's the sound of one of modern music's most inventive minds coming fully into his own as a bandleader and storyteller.

A Brooklyn native, Henry may be best known for his role in Snarky Puppy, the instrumental jazz-pop orchestra hailed by Rolling Stone as "one of the more versatile groups on the planet right now." He's won a pair of GRAMMY Awards for his work with the band since 2012, but Henry's deft keyboard skills have been blowing minds around the world for more than two decades now. At six, he made his debut at Harlem's legendary Apollo Theater, and at nineteen, he joined the touring band of jazz icon Kenny Garrett. Since then, he's toured or recorded with everyone from Bruce Springsteen and The Roots to P. Diddy and Yolanda Adams in addition to cracking the Top 10 on Billboard's Jazz charts with a pair of solo albums. NPR called him "a master" and said his "musical charisma is a match for a nearly 400 pound organ," while Keyboard Magazine dubbed his playing "soulful, church-y, playful, restrained, and virtuosic," and The Boston Globe raved that "if anyone's going to preach the gospel of the Hammond organ, it should be Cory Henry."

The gospel, in fact, is where it all began for Henry. He grew up performing and singing in church (a recent documentary titled ‘Gotcha Now' features incredible footage of him tearing up the organ there at the age of four), but he refrained from sharing his voice with the world outside those holy halls for many years.

"I just didn't think my voice was good enough," he confesses. "I didn't think anyone else would want to hear it. But now that I've overcome my fear of singing, I've gotten comfortable with my voice, and it's become just like another instrument for me."

Henry's vocals on the album are smooth and breathy, with an intimate delivery that's alternately understated and ecstatic. While his keyboard playing often draws comparisons to Oscar Peterson and Herbie Hancock, Henry's singing reveals a whole different side of his musical personality, one that synthesizes everything from Michael Jackson and Marvin Gaye to Stevie Wonder and Prince.

"Every influence that I could think of growing up is in this record," reflects Henry. "I'm trying to break the barriers. The word funk is in our name, but I want people to know that this band is bigger musically than any one genre."

Henry pieced together The Funk Apostles' lineup out of players he met on the road over the years, and each member of the band is an all-star in their own right. Guitarist Adam Agati, who co-wrote the album's lyrics with Henry, has worked with everyone from Booker T. Jones to Ludacris, while bassist Sharay Reed has performed with Patti LaBelle, Aretha Franklin, Chakha Khan, and more. Henry met drummer TaRon Lockett while he was playing with Snarky Puppy, but he's performed with some of the biggest names in R&B including Erykah Badu and Montell Jordan, and keyboardist Nick Semrad's credits include Miss Lauryn Hill, Bilal, and Gabriel Garzon-Montano.

Recorded in Williamsburg, Brooklyn, ‘Art Of Love' was tracked live to tape in an effort both to capture the inimitable energy of the band's live shows and to channel the warm analog vibes of the 1970's. While Henry may be renowned for his gifts as an improviser, the album serves as a showcase for his skills as a songwriter and producer, rich with intricate arrangements and memorable hooks. That's not to say it's without spontaneity, though. The band worked with minimal rehearsal (Henry estimates they've had three in the two years since the band started playing together), and several tracks are actually first-take recordings.

The driving, funky "In The Water," combines a relentlessly pulse-pounding rhythm section groove with swirling synthesizer underneath Henry's insistent, charismatic vocals. Like much of the album, the song is an examination of love: what it means, what it takes, what makes it last. On lead single "Trade It All," he offers up a vulnerable, honest account of the sacrifices he'd make for a lover, while the sensual and smooth "Just A Word" sets a sultry mood for romance, and the fluid, elegant "Our Affairs" finds him asking, "Babe tell me why / You put me through Hell when Heaven's where true love resides?"

As a writer, Henry is clearly interested in love beyond just the romantic sense of the word, though, often zooming out to take a big picture look at a world that seems to be sorely lacking in it. "Find A Way" is an anthem to making life better through compassion and empathy, frequent show-closer "Give Me A Sign" is a blues and gospel-tinged love letter to music itself, and the punchy "Takes All Time" is Henry's true-life account of his journey to manhood, his "testimony to love and not rushing to find it."

The album ends on a more political note with "Free," a gritty tune inspired by current events that features Henry's most impassioned vocal performance yet as he promises, "we gonna fight / live or die for our rights / everywhere."

"I want to make music that really means something," he explains. "I think of the 60's and 70's as this golden era of music, and if you look at some of the top artists then like Curtis Mayfield and Stevie Wonder, they were singing about what was happening around them in this creative way that made people want to act. They used music as a tool to reach the world and bring about change to help make it a better place. I want to do that, too."

It's an ambitious goal, to be sure, but if there's one thing this album proves, it's that Cory Henry is up for the challenge. 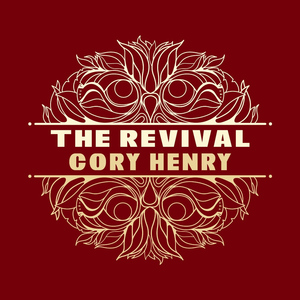 A Member Of GRAMMY-winning Snarky Puppy - "Keyboard Whiz" (NPR Music) Cory Henry Crafts Tribute To His First Love – The Hammond Organ - On New Album/DVD 'The Revival.' The First Of Two 2016 Solo Albums Coming Via GroundUP Music/Universal Music Classics. Cory Henry has been playing the Hammond B-3 organ since he was two years old and on The Revival, he has crafted a tribute that shows where the instrument has been and where it can be taken in his monumentally talented hands. Filmed and recorded in Henry's native Brooklyn at the Greater Temple of Praise, The Revival finds Henry taking the organ across multiple genres – gospel, R&B, jazz, soul – in a performance that needs to be seen as much as heard.  Snarky Puppy band mate Michael League calls The Revival "a master class for the organ."