Clark (born 29 August 1979) is an British electronic musician, performing under the mononym Clark. He has produced music for his own albums, as well as music for television, films and video games. His records have been released by Warp Records, Deutsche Grammophon and his own label Throttle Records.

Clark was born Christopher Stephen Clark in 1979 in St Albans, Hertfordshire, England, where he grew up and attended St Albans School. He started making music as a teenager, and also began experimenting with building his own primitive equipment, including a "home-built stylus made out of a hook and some masking tape". He went on to attend Bristol University. As a student, his music teacher told him that if Clark were to buy a drum machine, he would give up all hope in Clark's musical ability. Whilst still a student, Clark first impressed staff at Warp Records playing under the moniker Chris From St Albans at their Nesh party in December 2000. He was subsequently signed to Warp, and as Chris Clark released his debut album Clarence Park in April 2001. Clark then moved to Brighton, followed by Birmingham where he stayed for some time, and during this time collaborated with Broadcast on a reinterpretation of his track "Herr Barr" and other unreleased material. He currently resides in Berlin. With the 2006 release of Throttle Furniture, he shortened his artist name to Clark. His music has been played on BBC Radio 6 Music by Shaun Keaveny, Lauren Laverne and Tom Ravenscroft. He also recorded a mix for Ravenscroft, described by the presenter as "just about the best ever done for the show."

Clark's music is generally considered to fall under the genre of electronic music, although Clark himself finds this label ambiguous and describes Turning Dragon as a "techno album". He often experiments with forms of degradation, distortion and decay associated with different mediums, employing techniques such as re-recording samples and field-recordings in different environments. Describing such processing, he has said "What I tend to do is just jam stuff through as many boxes as I can, until everything sort of bleeds into itself and all its surrounding parts". Clark plays the drums, and some of his material, especially Body Riddle features recordings of his drumming, often heavily re-sampled.

On describing his live set Clark states "If you see me play, my hands are all over the place – literally I'm doing every single thing. Everything that happens on stage is being played and created live. It's very interactive. So in that respect, it is very much based on live instrumentation." His set has in the past included a live drummer.

In December 2013 he premiered his live show Phosphor in London.

Clark collaborated with Brighton based artist collective Blast Theory in 2011 on a piece entitled Fixing Point. The piece was an interactive audio walk with music by Clark and deals with the legacy of the Conflict In Northern Ireland, in particular the disappearance of Seamus Ruddy. He worked again with the collective on a piece for the Aichi Triennale, contributing his track Black Stone for use in the work.

During the summer of 2010, he scored a contemporary dance piece titled 'Tilted Fawn' that was performed by Melanie Lane at the Sydney Opera House. The pair also collaborated on a 2013 performance installation Shrine, which trod "the line between dance performance and sculptural installation" and was centred on ideas of ritual and ceremony. They have also worked together on the project Held, which "explores the relationship between memory and the architecture of space that we live in".

The track The Pining Pt.2 from Iradelphic was featured in the 2013 film Elysium. The track Vengeance Drools was used in a domestic violence awareness advertising campaign by Woman's Aid, which starred Keira Knightley. In 2019 Clark scored the film Daniel Isn't Real.

Clark contributed an unreleased track, "Alice", to the OST for the game Sleeping Dogs. He also contributed to the soundtrack of Driveclub. The song Winter Linn was added to Watch Dogs 2's soundtrack.

Clarence Park was Clark's first release and debut full-length album, released on Warp Records in April 2001 under the artist name Chris Clark. The album was named after Clarence Park, a public park in his home city of St Albans.

Empty the Bones of You was Clark's second full length, released on Warp Records in September 2003 under the artist name Chris Clark. Reviews noted that Clark had developed a more mature and distinctive voice, and The Mlik Factory described it as "consistent, mature and bloody captivating".

Body Riddle was released on Warp Records in October 2006. The album marked a change in style for Clark, and featured the prominent use of live instrumentation, albeit highly processed. It was well received by critics, with Pitchfork giving it 8.5/10 and Almost Cool giving it 8/10.

Clark's fourth full-length album, Turning Dragon, found Clark exploring a less organic and more mechanised sound, with Pitchfork declaring that it "takes a detour from Clark's ultimate goal of meshing man and machine into one seamless, clattering bundle" and it finds the robots taking the upper hand". The album fared well with critics, with Pitchfork awarding it 8.2/10 and Resident Advisor giving it 4/5. It was released on Warp Records in March 2008.

Totems Flare was released on Warp Records in July 2009.

Iradelphic was released on Warp Records in April 2012. The album was described by The Quietus as "less ethereal, more compact and cohesive" than earlier work. Clark himself commented "Iradelphic is some of the most heartfelt stuff I've ever done, and even though a lot of it is years old, it still really resonates with me."

Feast/Beast was released on Warp Records in September 2013. It predominantly features Clark's remixes of other artists' tracks, amongst them Nathan Fake, Battles, Nils Frahm and Letherette, but also features some reworks of Clark's tracks by other artists.

Playground in a Lake 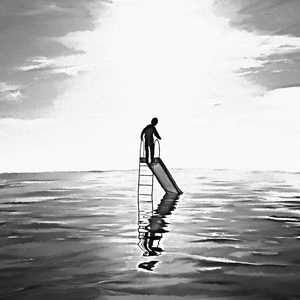 On 26 March 2021 the ambitiously multifaceted musician/composer Clark presents his chillingly affecting ninth studio album Playground In A Lake, on which he broadens horizons and tries new things, with profound results. An intriguingly suggestive title, esoteric concept(s) and disparately unusual but cohesively fused components are chiselled into an effective, concise and painstakingly curated whole. Released as a single on 26 January, "Small" will offer a first glimpse into Clark's playground. Soloist Nathaniel Timoney delivers a grim message with an angelic ring and a haunting hook on one of the few vocal tracks of the upcoming album.

With its orchestral tropes and release on Deutsche Grammophon, Playground In A Lake may seem a departure to the casual observer, but is in fact a more illuminated development of clues from past releases. Seeds planted in Kiri Variations' bucolic noir, the piano vignettes from Clarence Park, the folky wonder of Iradelphic, the strings on Body Riddle and Clark's skewed symphonic rework of Max Richter's Path 5 have all grown in prominence and vivid detail

Playground in a Lake