"No other instrument in jazz is more essential than the bass, both backbone and heartbeat, and Haden is its master." – Francis Davis, The Atlantic Monthly

Time Magazine has hailed jazz legend Charlie Haden as "one of the most restless, gifted, and intrepid players in all of jazz." Haden's career which has spanned more than fifty years has encompassed such genres as free jazz, Portuguese fado and vintage country such as his recent cd Rambling Boy (Decca) not to mention a consistently revolving roster of sidemen and bandleaders that reads like a list from some imaginary jazz hall of fame.

As an original member of the ground-breaking Ornette Coleman Quartet that turned the jazz world on its head the late 1950's, Haden revolutionized the harmonic concept of bass playing in jazz. "His ability to create serendipitous harmonies by improvising melodic responses to Coleman's fee-form solos (rather than sticking to predetermined harmonies) was both radical and mesmerizing. His virtuosity lies…in an incredible ability to make the double bass ‘sound out'. Haden cultivates the instrument's gravity as no one else in jazz. He is a master of simplicity which is one of the most difficult things to achieve." (Author Joachim Berendt in The Jazz Book) Haden played a vital role in this revolutionary new approach, evolving a way of playing that sometimes complemented the soloist and sometimes moved independently. In this respect, as did bassists Jimmy Blanton and Charles Mingus, Haden helped liberate the bassist from a strictly accompanying role to becoming a more direct participant in group improvisation.

From 1967-1976, Haden became a member of Keith Jarrett's stellar trio, quartet and quintet which included drummer Paul Motian, percussionist Guilherme Franco and tenor saxophonist Dewey Redman. In 1976, he formed the band Old and New Dreams with fellow Ornette Coleman alumni Don Cherry, Dewey Redman and Ed Blackwell to perpetuate Coleman's music as well as their own with musicians who knew and could perform Coleman's improvisational concept.

In 1969, under the banner of Liberation Music Orchestra (MCA/Impulse), Charlie commissioned Carla Bley to arrange for a large cast of illustrious improvisers including Don Cherry and Gato Barbieri and Roswell Rudd and made a record that has become a milestone in recorded jazz. In 1970, it won among many awards, France's Grand Prix Charles Cros as well as Japan's Gold Disc Award from Swing Journal.

The group's self-titled debut is a true milestone of modern music, blending experimental big band jazz with the folk songs of the Spanish Civil War to create a powerfully original work of musical/political activism.

A few years later he met Pat Metheny who was to become a life-long friend and collaborator and played alongside Dewey Redman, Michael Brecker and Jack DeJohnette in Pat Metheny's 80/81 band.

In 1982, Haden established the jazz studies program at California Institute of the Arts

The program he developed is unique in that it emphasizes smaller groups and the spiritual connection to the creative process and helps students discover their individual sound, melodies and harmonies. For his educational work he was recently honored by the Los Angeles Jazz Society as "Jazz Educator of the Year".

In 1986 he formed his acclaimed straight ahead band Quartet West with saxophonist Ernie Watts, pianist Alan Broadbent and drummer Larance Marable who because of illness was replaced by Rodney Green. Haden's vision for Quartet West recognizes the beginning of modernism in jazz. (Francis Davis, The Atlantic Monthly)Along with lush forties pop ballads and lilting originals by Haden or Alan Broadbent, the group's pianist, the Quartet's elegant "noir" infused bop-oriented style and stellar instrumentalists perfectly evoke a sense of place like no other band. Beautiful melodies are given lush, lyrical interpretations that captivate with their sublime beauty and passionate delivery. The Quartet has celebrated over twenty years together and it is one of the rare groups in jazz that has continued to perform as an ensemble over a long stretch of time.

In 1997, the classical composer Gavyn Bryars wrote an extended adagio for Charlie Haden By the Vaar accompanied by strings, bass clarinet and percussion. Recorded with the English Chamber Orchestra on the album Farewell to Philosophy (Philips) ,the piece hauntingly echoes Charlie's bass sound with its gut strings and resonant pizzicato notes in a wonderful synthethis of jazz and classical chamber music

Over the years Charlie Haden has received a Guggenheim Fellowship and several NEA grants for composition as well as three Grammy awards and more than fifteen Grammy nominations and countless international awards. In 1997 he was awarded a Grammy for his duet recording with Pat Metheny Beyond the Missouri Sky (Verve) which Haden dubbed "contemporary impressionistic Americana". The chord voicings and harmonic sense the two musicians display is uncanny as they bend and flex the melody and solo lines to create expressive and contemplative musical statements.

in 2001 Haden received the Latin Grammy Award for Best Latin Jazz CD Nocturne (Verve) featuring luscious boleros from Cuba and Mexico. Following that triumph he was again awarded a Latin Grammy for his follow-up cd Land of the Sun (Verve) which explores the compositions of the great Mexican composer Jose Sabre Marroquin "It's an homage to Marroquin, to the beauty of Mexican music. It's the ‘day' to Nocturne's ‘night' ", says Haden. With arrangements by Cuban pianist Gonzalo Rubalcaba, Haden weaves a gorgeous tapestry of sound reflecting the beauty of Mexico.

His love of world music has also seen him teaming with a variety of diverse international players for many years, including Brazilian guitarist Egberto Gismonti, Argentinean bandoneon master Dino Saluzzi and Portuguese guitarist Carlos Paredes and even players outside the jazz genre such as Rickie Lee Jones, Beck, the Minute Men, James Cotton and Ringo Starr.

Along with a few rare concert reunions with Ornette Coleman- most recently in the summer of 2009 during the Southbank Festival's Meltdown in London – Haden has made a specialty of performing and producing intimate duet recordings with such jazz greats as Hank Jones on the album Steal Away (Verve) , Kenny Barron Night and the City (Verve) which are a perfect showcase for his rich elegant tone.

As he continues to perform with his piers such as Lee Konitz as well as younger musicians such as Brad Mehldau and Ethan Iverson, "There may be no greater ambassador for jazz these days than L.A.'s adopted son Charlie Haden." Chris Barton AAJ, 2009

In 2008 Haden brought his personal history full circle to record Rambling Boy (Decca) connecting the music from his earliest childhood beginning at the age of two as a member of the Haden Family, a legendary Midwest music institution in the 1930s and 1940s which toured and sang on the radio, to the new generation of the Haden Family now reborn in the 21st century. Rambling Boy includes songs made famous by the Stanley Brothers, the Carter Family, and Hank Williams alongside fabled traditional tunes and some striking original compositions. The performing cast includes Haden, his wife and co-producer

Ruth Cameron, all four of his children (the triplets Petra, Rachel and Tanya Haden, their brother Josh Haden), and his son-in-law Jack Black– each of whom has his or her own career in music. In addition, Rambling Boy features guest appearances by some of the most illustrious names in contemporary Americana and popular music: Roseanne Cash, Elvis Costello, Vince Gill, Bruce Hornsby, Pat Metheny, Ricky Skaggs & the Whites, and Dan Tyminski and also includes such illustrious musicians as Jerry Douglas, Sam Bush, Stuart Duncan, Bryan Sutton and more.

To complement this Grammy nominated recording, Swiss film director Reto Caduff released a documentary film about the Haden's life also named Rambling Boy in 2009. It's making the film festival circuit both internationally and in the U.S. and Canada including the 2009 Telluride and Vancouver International Film Festivals.

In 2010 Charlie recorded several albums which have just been recently released in 2010 & 2011 and are all currently among the top one hundred bestsellers on the jazz chart:

"Jasmine" on ECM Records, a duet album with former long-time collaborator Keith Jarrett. This was the result of a reunion of the two musicians when Keith was interviewed for the Swiss documentary film about Charlie called "Charlie Haden Rambling Boy".

"Live at Birdland" on ECM Records with Lee Konitz, Brad Mehldau and Paul Motian which is a live recording from a date at Birdland in 2011 with four masters of improvisation.

Haden has been honored with the 2012 NEA JAZZ MASTER AWARD, the nation's highest honor in jazz which will be given to him and four other honorees at a ceremony in Lincoln Center, NYC.

Charlie Haden truly is beyond category!

Charlie Haden's many honors also include a Guggenheim Fellowship, sixteen Grammy nominations in both the jazz and bluegrass categories. He has received dozens of "Artist" or "Album of the Year" awards from the New York Times, New Yorker, Time, Stereo Review, Downbeat, Billboard, CD Review, and Rolling Stone and his albums are on many "Best of…" lists over the years.

Time / Life - Song for the Whales and Other Beings 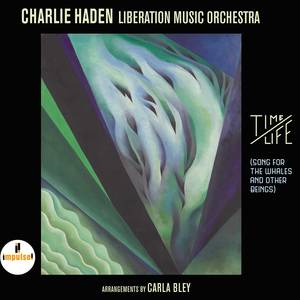 Time / Life - Song for the Whales and Other Beings
http://www.charliehadenmusic.com/