Cellist Charles Curtis studied at the Juilliard School under Leonard Rose and Harvey Shapiro. Before receiving his Bachelors and Masters degrees in 1985, he spent two terms studying history at the London School of Economics and Political Science. Upon graduating from Juilliard, Curtis was appointed to the faculty of Princeton University, where for four years he taught cello and chamber music and advised graduate compCharles Curtissition students on matters of string performance and technique.

From 1989 through 2000 Curtis was First Solo Cellist of the Symphony Orchestra of the North German Radio (NDR) in Hamburg. In this capacity and as a concert soloist he has soloed under distinguished conductors such as Herbert Blomstedt, André Previn, John Eliot Gardiner, Christoph Eschenbach, Günter Wand and Max Rudolf. He has been guest soloist with such orchestras as the San Francisco Symphony, Baltimore Symphony, National Symphony, Orchestre de la Suisse Romande, Symphony Orchestra of Berlin, Orquestra de la Maggio Musicale Florence, and the orchestras of Sao Paolo, Brazil and Santiago de Chile, among many others. His recording of the Shostakovich Cello Concerto No. 1 with the NDR Symphony Orchestra under Leopold Hager was released in 1998 on the German Klassik Klub label.

Acknowledged internationally as a performer of new and experimental music, Curtis has been closely associated for over fifteen years with the legendary avant-garde composer La Monte Young. As director of Young's Theatre of Eternal Music String Ensemble, Curtis has participated in more performances and premières of Young's works than any other interpreter. These have included major performances at the Barbican Centre in London, the Darmstadt Festival, the Dia Center for the Arts in New York, the Inventionen Festival in Berlin, the Cathedral of Dreams Festival in Krems, Austria, the Beyond the Pink Festival in Los Angeles, the Schleswig Holstein Music Festival, leading the strings of Ensemble Modern for the Hessischer Rundfunk in Frankfurt, and with the Belgian ensemble Ictus in the Brugge 2002 Festival. Curtis is one of the few instrumentalists to have perfected Young's highly complex just intonation tunings, and is one of only a handful of musicians to have appeared in duo formations with Young, performing works by early minimalists Richard Maxfield and Terry Jennings. A new concert-length work composed for Curtis by La Monte Young and Marian Zazeela, Just Charles & Cello in The Romantic Chord, for cello, pre-recorded cello drones and light projection, in a setting of Abstract #1 from Quadrilateral Phase Angle Traversals, was premièred by Curtis in Paris and Dijon in November-December 2003 and in Lyon and Berlin in March 2004.

For a number of years Curtis has maintained an interest and a presence in the downtown New York free music scene, performing in clubs like Tonic, the Knitting Factory, the Cooler, ABC No Rio, CBGB and Acme Underground. He collaborated over a period of years with poetry-rock pioneers King Missile, John S. Hall, Dogbowl and Kramer, and has been a guest of artists and groups such as Alan Licht, Michael J. Schumacher. Donald Miller, Dean Roberts, Elliott Sharp, David First, Ben Neill, Bongwater, Borbetomagus, Circle X, and with individual members of the bands Television, Pere Ubu and Public Image Limited.

As an outgrowth of his intensive work with La Monte Young and his presence in the New York avant-garde rock scene, Curtis has evolved into a creative artist straddling the boundaries between art rock, sound art and minimalist composition. For a number of years he has led the Charles Curtis Trio, presenting his sound-installation-style rock music in clubs throughout Europe and releasing four critically acclaimed albums. Ultra White Violet Light, a double LP/CD designed for simultaneous playback on up to four separate stereo systems, was described by British magazine The Wire as "one of the most treasured sound art objects of the last few years". His large ensemble and electronics work for children, "Richard's Trip", was released in 2000 by Deutsche Grammophon. He has toured as soloist with his abstract sound and text pieces, performing in Paris, Den Haag, Amsterdam, Brussels, Berlin, Dresden, Cologne and numerous American cities, including the 2002 South by Southwest Festival in Austin, Texas; and he has led larger ensembles in concerts mixing his own works and the works of avant-garde composers whom he champions (La Monte Young, Terry Jennings, Richard Maxfield, Morton Feldman).

Curtis has enjoyed an extensive and distinguished chamber music career. At the age of seventeen he won first prize in the Coleman International Chamber Music Competition as cellist of the Gagliano Quartet, and at nineteen made his Carnegie Hall debut playing the Tchaikovsky Trio with Oscar Shumsky and Earl Wild. As cellist of the Ridge Quartet from 1986 to1988 he toured Europe, Japan and North America, including an extensive tour with Rudolf Firkusny as guest pianist. Curtis' collaboration with the Ridge concluded with a concert on the string quartet series at Carnegie Hall. He was twice a participant in the Marlboro Festival and toured nationally with Musicians from Marlboro; he has guested with the Chamber Music Society of Lincoln Center, at the Wolf Trap, La Jolla, Ravinia and Victoria Festivals, and at the invitation of Shlomo Mintz, in the concert series "Shlomo Mintz et ses amis" at the Louvre. He was featured as continuo soloist on Kathleen Battle's album "Grace" for Sony Classical, and toured with Miss Battle and Anthony Newman performing Purcell, Dowland, Handel and Bach. The list of his chamber music collaborators includes musicians such as Bruno Canino, Christoph Eschenbach, Joseph Kalichstein, Paul Gulda, Ursula Oppens, Lillian Kallir, Jeffrey Kahane, Joshua Bell, Norbert Brainin, Vladimir Spivakov, Leila Josefowicz, Jaime Laredo, Janos Negyesi, Rolf Schulte, Yuri Bashmet, Nobuko Imai, Lynn Harrell, Fred Sherry,
and Aurele Nicolet.

Since 2000 Curtis has been Professor of Contemporary Music Performance at the University of California, San Diego, where he had previously been guest lecturer and performer. A particular area of Curtis' research is reflected in his ongoing performance seminar, Ensemble Realizations of Unconventionally Notated Scores. The performing musicians (many of them composers and technologists) in this group have realized challenging graphic, text-based, rule-based and actionist scores by composers such as Alvin Lucier (under his supervision), Cornelius Cardew, Christian Wolff, La Monte Young, Walter de Maria, George Brecht, James Tenney, Michael Pisaro and Steve Reich. During the academic year 2001-2002 Curtis co-curated (with composer Roger Reynolds) a series of concert and film presentations entitled Time Forms, exploring the varying relationships which composers and filmmakers exhibit to the experience of time.

A new work by composer Alvin Lucier, Charles Curtis for solo cello with slow sweep pure wave oscillators, will appear in Fall 2004 on a double CD through Sigma Editions and Antiopic, together with a series of Lucier's other works for solo cello and solo clarinet, in collaboration with clarinetist Anthony Burr. Curtis has also recently recorded Morton Feldman's 80-minute cello and piano work, Patterns in a Chromatic Field, with pianist Aleck Karis, for Tzadik Records. He is featured as guest soloist on Wayne Shorter's 2003 album Alegria, playing the solo in Villa-Lobos' Bachianas Brasilieras No. 5. Other recent releases include the live concert recording with Earl Wild and Oscar Shumsky of the Tchaikovsky Trio from Carnegie Hall on Ivory Classics, and a new Charles Curtis Trio mini-CD, Music for awhile, on Beau Rivage Records. In Winter 2004 he gave the West Coast première of Morton Feldman's Cello and Orchestra with the La Jolla Symphony under conductor
Harvey Sollberger.

In 1995, on La Monte Young's recommendation, Curtis attended master classes in Indian classical music with North Indian master vocalist Pandit Pran Nath in Bremen, Germany. Since 1989, Curtis has studied the Kirana style with Young through their performances together of the Terry Jennings Piece for Cello and Saxophone (1960), in which Young sang the saxophone part, and Curtis became a member of Young's Just Alap Raga Ensemble in August 2003.

Upcoming concerts include a New York performance of Feldman's Patterns in a Chromatic Field in the Great Hall at Cooper Union, an evening of Alvin Lucier compositions at New York's Tonic, and performances of Just Charles and Cello in the Romantic Chord along with raga concerts with La Monte Young at the Donau Festival in Krems, Austria,
in spring 2005.

Curtis is a native of Laguna Beach, California. When not travelling he is at home in the San Diego community of Ocean Beach with his wife Annegret and their daughters Frieda, Louise and Esther; and where Curtis is a founding member of the local Voltaire Street Artists' Collective, a collaborative performance and
exhibition space. 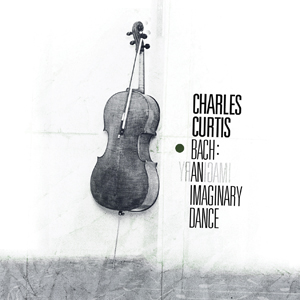 The focus behind these electrifying new interpretations of three Bach cello suites resides in the essential wellspring of dance. Bach took Baroque dance forms as the template for his sublime abstractions, spinning webs of music that have entranced, mystified and exalted the spirits of musicians and audiences for hundreds of years. But it is safe to say that there has never been an interpretation of the suites like this one. Cellist Charles Curtis and producer Robert Sadin have crossed time and space to bring into the studio one of the most ancient sources of rhythm---the tabla drum---providing an organically energizing acoustic embellishment that makes these dances truly sparkle and dance on an almost otherworldly scale.