Taking their name from St. Cecilia, the patron saint of music, the Cecilia String Quartet continue to win praise following their 2010 First Prize at the Banff International String Quartet Competition (BISQC). "The balance between expressiveness and interplay was almost dauntingly perfect," wrote the Berliner Zeitung after a performance in the Konzerthaus Berlin. European tours have taken the four Toronto-based Canadian musicians to the Concertgebouw Kleine Zaal (Amsterdam), Beethoven-Haus (Bonn), Wigmore Hall (London), and venues in
Italy and Belgium.

The Cecilia String Quartet (CSQ) formed while students at the University of Toronto. They soon won acclaim for their ‘extraordinary commitment and maturity' (Montréal Gazette). Prizewinners at international string quartet competitions in both Osaka (2008) and Bordeaux (2010) and winners of a Galaxie Rising Stars Award in Canada, the CSQ went on to capture the First Prize at the BISQC. "With a stunning spirit of creativity that consistently celebrated risk-taking and discovery, the Cecilia Quartet impressed the distinguished jury above all others," said the competition's
Executive Director, Barry Shiffman,
when announcing the winners.

The CSQ now perform for leading presenters in Canada, the United States, and Europe. They are also Ensemble-in-Residence at the University of Toronto's Faculty of Music, a position that has been made possible by a generous gift from BMO Financial Group. Their concert recordings have been broadcast on more than a dozen international public radio networks, including Australia, Canada (CBC/SRC), and Germany. In addition to performing, they have a four-CD contract with ANALEKTA. The first recording of music by Dvořák was released in March 2012. The second recording of music by Janáček, Berg, and Webern, is scheduled to be released in Spring 2013.

Highly committed to teaching and outreach, the CSQ have held teaching duties at Austin Chamber Music Festival (Texas), San Diego State University (California), McGill University (Québec), QuartetFest at Wilfrid Laurier University (Ontario), Summer String Academy at Indiana University and were recent Quartet Fellows at the Glenn Gould School of the Royal Conservatory of Music in Toronto. They have presented educational programs for elementary and high schools across Canada, the USA, Italy, and France. They CSQ actively seek to develop new audiences and their presentations have taken them to venues as varied as the Monarch School for Homeless Youth (San Diego) and the SLAC National Accelerator Laboratory (Stanford).

The quartet enjoys developing innovative programming. In 2009 they created BLiM (Breathing Life into Music), a month-long residency in France in collaboration with ProQuartet and the Centres culturels de rencontre (Cultural Centres – Historic Monuments) association in France and Europe (ACCR). In 2010, they collaborated with the Afiara String Quartet in premièring and recording compositions by eight composers of the Common Sense Composers Collective at The Banff Centre. In 2011, they collaborated with actor and director Alon Nashman in the multimedia production The Snow Queen.

Min-Jeong Koh plays on a ca. 1767 Joannes Baptista Guadagnini violin, and Sarah Nematallah plays on an 1851 Jean Baptiste Vuillaume violin, both on loan from an anonymous donor. Rachel Desoer now performs on the 1929 Carlo Giuseppe Oddone cello on loan from the Canada Council for the Arts. The quartet would like to thank the anonymous donor and
the Canada Council for the Arts
for their generous support.

Players:
Caitlin Boyle, Viola: Caitlin is originally from Dundas, Ontario where she was born in 1980. She began playing the viola at age three at the Hamilton Suzuki School of Music. More recently she completed Masters of Music at San Diego State University, with Brian Chen in 2009, and a Graduate Diploma at McGill under the guidance of Andre Roy in 2010. In the fall of 2005 she participated in a tour of the East Coast of the United States with the Munich Symphony Orchestra under the direction of Phillippe Entremont. Her passion for chamber music was fostered at the Southern Ontario Chamber Music Institute and the Domaine Forget Chamber Music Sessions and continued to grow through the support of such artists and teachers as Richard Lester, Terrence Helmer, and the St. Lawrence String Quartet. She has been a member of the Cecilia String Quartet since spring 2006.  In fall of 2010, she was admitted to the Doctor of Musical Arts Program at the University of Toronto, where she is studying with Kathy Rapoport.

Rachel Desoer, Cello: Rachel is a cellist from Hamilton, Ontario. She graduated from Oberlin Conservatory in 2008 with a Bachelor of Music degree. Rachel also attended the Juilliard School, McGill University and rounded out her education at the Banff Centre. Most passionate about chamber music, she has had the opportunity to study with some of the greatest chamber musicians of our time (St. Lawrence, Orford, Vermeer, Borromeo, Brentano, Colorado and
Takacs string quartets).

Rachel has performed in a wide variety of ensembles and musical styles.  As a soloist  she has performed with the Oberlin Orchestra and the National Academy Orchestra. As an orchestral musician she participated in the Institute of Orchestral Studies of the National Arts Centre Orchestra. Rachel has collaborated with dancers, composers, jazz musicians, vocalists and filmakers as well performing many solo recitals. She has had the good fortune to tour Europe and China and compete in the 5th Melbourne International Chamber Music Competition. She is honoured and excited to be the recently appointed cellist of
the Cecilia String Quartet.

Min-Jeong Koh, Violin: Korean-Canadian violinist Min-Jeong Koh joined the Cecilia Quartet in 2007.  Before she decided to spend every day of her life with these fine three ladies, Min was a top prize winner of the 2006 Eckhardt-Gramatté Competition, where she was also awarded the Prize for Best Performance of the Commissioned Piece, a winner of the Galaxie-Rising Stars Program from the CBC, the Kathleen Parlow Concerto Competition, as well as the Felix Galimir Award for Chamber Music Excellence. More recently, Min was a winner at Canada Council's 2009 Musical Instrument Bank Competition for the Arts, which won her the use of a ca. 1767 Joannes Baptista Guadagnini violin.

As a soloist, Min has appeared with the Banff Festival Orchestra, Toronto Youth String Orchestra, North York Concert Orchestra, Mooredale Concerto Players, University of Toronto Symphony Orchestra and with Via Salzburg. She holds a Bachelor of Music from University of Toronto and a Masters of Music Degree from San Diego State University. She has also studied at McGill University and at the New England Conservatory of Music. Her dedication to performance and study led to an invitation to the national honor society, Pi Kappa Lambda. Min's former teachers include Lorand Fenyves, Erika Raum, Scott St. John, Mayumi Seiler and Hyung Sun Paik. When she is not with Sarah, Caitlin, or Rachel, Min can be found roaming the halls in University of Toronto, where she is pursuing a Doctor of Musical Arts Degree.

Sarah Nematallah, Violin: Sarah Nematallah has been delighting audiences with her violin playing since the age of three. Ms. Nematallah has studied chamber music intensively with Lorand Fenyves, Terence Helmer of the Orford Quartet, and Roman Borys of the Gryphon Trio. In 2005 she was awarded the University of Toronto Felix Galimir Chamber Music Award as a founding member of the Cecilia String Quartet. Ms. Nematallah has been the recipient of numerous awards and scholarships to aid her in her studies at the University of Toronto, and in 2005 she was awarded the University of Toronto William and Phyllis Waters Graduating Scholarship, an award for a graduating student deemed by the university to have the greatest potential for making an important contribution to the field of music. Ms. Nematallah has appeared as a guest soloist with the Brampton Symphony Orchestra, Mooredale Chamber Orchestra and Cathedral Bluffs Symphony Orchestra on several occasions. She plays on the 1851 Jean Baptiste Vuillame on loan from an anonymous donor. 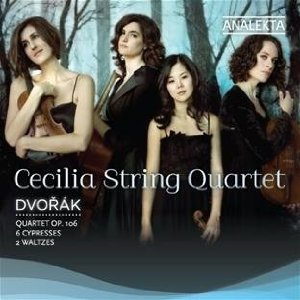 Analekta presents the Cecilia String Quartet : Dvorak: Quartet Op. 106, 6 Cypresses, 2 Waltzes. Dvorak originally wrote his collection of Cypresses as songs when he was 23 and head over heels in love with one of his students and published eight of them as his Love Songs, Op. 83. Then, in the spring of 1887, he made a version of a dozen of these gentle, lyrical songs for string quartet. He called them Cypresses, only slightly changing the original songs to best preserve their freshness and directness. Not published until 1921, the pieces are attractive, immediately appealing and full of the musical hallmarks of the Dvorak we know from the works of his maturity.