A highly regarded pianist, composer, and arranger, Carla Bley has been at the forefront of avant-garde jazz and modern creative music since the '60s. She initially emerged as a composer, working closely with her first husband, pianist Paul Bley, as well as progressive artists like George Russell and Jimmy Giuffre. She is a founder of the Jazz Composers' Orchestra and her long-form jazz opera Escalator Over the Hill stands as a distinct stylistic signpost of the era. Bley has worked with a host of free-jazz icons -- including Pharaoh Sanders, Steve Lacy, and Peter Brotzmann, among others -- and continued to compose challenging genre-bending works into the 21st century. Along with her many large ensemble works, she has regularly collaborated in a trio with her partner bassist Steve Swallow and saxophonist Andy Sheppard, issuing albums like 2013's Trios, 2016's Andando el Tiempo, and 2020's Life Goes On.

Born Carla Borg in 1938 in Oakland, California, Bley learned the fundamentals of music as a child from her father, a church musician. Thereafter, she was mostly self-taught. She moved to New York around 1955, where she worked as a cigarette girl and occasional pianist. She married pianist Paul Bley, for whom she began to write tunes (she also wrote for George Russell and Jimmy Giuffre). In 1964, with her second husband, trumpeter Michael Mantler, Bley formed the Jazz Composer's Guild Orchestra, which a year later became known simply as the Jazz Composer's Orchestra. Two years later, Bley helped found the Jazz Composer's Orchestra Association, a nonprofit organization designed to present, distribute, and produce unconventional forms of jazz.

A Genuine Tong FuneralIn 1967, vibraphonist Gary Burton's quartet recorded Bley's cycle of tunes A Genuine Tong Funeral, which brought her to the attention of the general public for the first time. Bley composed and arranged music in 1969 for Charlie Haden's Liberation Music Orchestra. In 1971, she completed the work that cemented her reputation, the jazz opera Escalator Over the Hill. In the '70s and '80s, Bley continued to run the JCOA and compose and record for her own Watt label. The JCOA essentially folded in the late '80s, but Bley's creative life continued mostly unabated. For much of the past two decades, she's maintained a midsized big band with fairly stable personnel to tour and record. She's also worked a great deal with the bassist Steve Swallow, in duo and in ensembles of varying size.

Are We There Yet?Bley wrote the music for the soundtrack to the 1985 film Mortelle Randone. She also contributed new compositions to the Liberation Music Orchestra's second incarnation in 1983. All through the '80s, '90s, and into the new millennium, Bley continued releasing albums through ECM, ranging from duets with bassist Steve Swallow to the Very Big Carla Bley Band. She issued a third duets album with Steve Swallow, Are We There Yet?, in 2000; Looking for America in 2003; The Lost Chords Find Paolo Fresu in 2007; and the big-band album Appearing Nightly in 2008.

Bley returned in 2013 with Trios, featuring Swallow and saxophonist Andy Sheppard; the album marked the very first time that the pianist recorded for ECM proper instead of WATT, which had been her home for over 40 years. Her next ECM effort, 2016's Andando el Tiempo, also showcased her trio with Swallow and Sheppard, as did 2020's Life Goes On.

A lauded bassist and composer, Steve Swallow is an influential performer who helped define the sound of post-bop, fusion, and modern creative jazz. An individualist on his chosen instrument, Swallow is known for emphasizing high notes and often approaches the electric bass as if it were a guitar. Following his initial emergence in the 1960s playing progressive jazz with Jimmy Giuffre and George Russell, he established long associations with pianist Paul Bley, trumpeter Art Farmer, vibraphonist Gary Burton, and others. Swallow has issued albums under his own name, including 1987's Carla, 1991's Swallow, and 1996's Deconstructed. He is also a longtime member of a trio with his partner, pianist Carla Bley, and saxophonist Andy Sheppard, issuing albums like 2013's Trios, 2016's Andando el Tiempo, and 2020's Life Goes On. A gifted composer, he is also recognized for writing such songs as "Eiderdown," "Falling Grace," and "Hotel Hello."

Hotel HelloBorn in 1940 in New Jersey, Swallow originally started out on the piano and trumpet before taking up the acoustic bass as a teenager. He joined the Paul Bley trio in 1960 and with Bley was part of an avant-garde version of the Jimmy Giuffre 3 during 1960-1962. He also recorded with George Russell and worked with both Art Farmer and Stan Getz. Also during the mid-'60s, he became a vital member of Gary Burton's quartet, making early forays into fusion jazz alongside guitarist Larry Coryell. It was during this time that Swallow began primarily playing electric bass. As a solo artist, he made his debut as a co-leader on several sessions, including joining Burton for 1975's Hotel Hello. He also paired with poet Robert Creeley for 1979's Home.

I Hate to SingAfter the 1970s, Swallow was closely associated with pianist and partner Carla Bley's groups, appearing on albums like 1984's I Hate to Sing, 1987's Sextet, and 1993's Go Together. During this period, he released several of his own albums for ECM, including 1991's Swallow with Gary Burton and John Scofield, 1996's Deconstructed with trumpeter Ryan Kisor, and 2000's Always Pack Your Uniform on Top with tenor saxophonist Chris Potter.

Damaged in TransitThe 2000s saw the release of several Swallow sets, including 2003's Damaged in Transit, 2004's Histoire Du Clochard: The Bum's Tale, and an intriguing set with poet Robert Creeley, 2006's So There. Hotel Hello appeared in 2007, followed by Believe in Spring, a collection of standards with Hans Ulrik and Jonas Johansen issued on the Stunt label, and Carla's Christmas Carols in 2008. In 2010, he recorded IS with trumpeter Tore Johanson for the Inner Ear label. Swallow formed We3 along with Adam Nussbaum and David Liebman; they recorded Amazing in 2011.

WisteriaIn 2012, Swallow and drummer Joey Barron played in Steve Kuhn's trio for the recording of Wisteria on ECM. It was a busy year for the bassist: he recorded another duet offering, The Agnostic Chant Book, with reed and woodwind master Jonas Schoen. He also led his own quintet for Into the Woodwork, which was issued on Xtra WATT in June 2013. That September, Swallow shared triple billing with Carla Bley and Andy Sheppard on Trios.

Loneliness RoadIn 2016, he was back with his trio cohorts for Andando el Tiempo. He then collaborated with Bobby Previte, Jamie Saft, and Iggy Pop on 2017's Loneliness Road and again joined Previte and Saft for 2019's You Don't Know the Life. Life Goes On, Swallow's fourth recording with Bley and Sheppard, arrived in 2020.

Andy Sheppard is one of Europe's leading saxophonists, a rare British musician who has had a profound impact on the international jazz scene. Sheppard, who was born in Wiltshire in 1957, took up the sax at the age of 19 and was playing in public within three weeks. After a period in Paris where he played in bars seven nights a week and worked with groups including performance art band Urban Sax, he returned to the UK in the mid-1980s and began his recording career.

His first album as leader for ECM (after many collaborations with Carla Bley on sibling label, WATT) was Movements in Colour, released in 2009. Here Sheppard heads an outstandingly gifted international quintet featuring guitarists John Parricelli and Eivind Aarset, tabla player Kuljit Bhamra and Arild Andersen on bass. John Fordham in the Guardian called it "lyrical, playful, accessible – and pure Sheppard".

Extending the range of his widely praised Trio Libero project ("an album of stately elegance and beauty") in 2012 with Michel Benita and Seb Rochford, Sheppard added guitarist Eivind Aarset (who made significant contributions to Movements In Colour) to the band to form the Andy Sheppard Quartet, first heard on Surrounded by Sea. With Aarset's ambient drones and electronic textures as a backdrop, the quartet have greater space than ever to explore. The album includes new compositions, open improvisations, an Elvis Costello tune, and the Gaelic traditional ballad "Aoidh, Na Dean Cadal Idir". Sheppard also features on Ketil Bjørnstad's album La Notte, a sort of "soundtrack to an inner film". 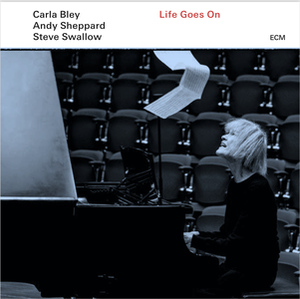 The third volume of a sequence of albums begun with Trios in 2013 and continued with Andando El Tiempo (2016), Life Goes On – once more recorded in Lugano and produced by Manfred Eicher - features striking new music from American pianist/composer Carla Bley, whose trio with saxophonist Andy Sheppard and bassist Swallow has a long history. (Their first recording in trio format was Songs with Legs, recorded for the ECM-distributed WATT label in 1994.) Bley has composed for ensembles of every size but, over time, the trio has established itself as an ideal unit for expressing the essence of her work. Throughout Life Goes On, Carla's terse, distinctive piano, shaping phrases irreducible as Monk or Satie, is beautifully framed by Swallow's eloquent, elegant bass guitar and Sheppard's yearning saxes. This trio has a unique collective sound, reflecting – as The Telegraph recently noted – "musical mastery of a rare order".