In a startlingly original recreation of music associated with jazz legend Miles Davis, co-producers Bob Belden and Louiz Banks have recast familiar themes from such landmark recordings as Bitches Brew, In A Silent Way, and Kind of Blue with an East Meets West sensibility on Miles...From India. An incredibly ambitious project involving two dozen musicians from two separate continents recording in studios around the world, Miles...From India is a cross-cultural summit meeting that puts a provocative pan-global spin on such Miles classics as "All Blues," "Spanish Key," "So What," "It's About That Time" and "Jean Pierre."

Sitar and tablas, ghatam and khanjira, mridangam and Carnatic violin blend seamlessly with muted trumpet and saxophones, screaming electric guitar and grooving electric bass lines, piano, upright bass and drums on this profound fusion of Indian classical and American jazz. Recorded in Mumbai and Madras, India and New York, Chicago and Los Angeles, the music on Miles...From India was performed by classical and jazz musicians from India with the addition of musicians who have recorded or performed with Miles Davis over the span of five decades. The 2-CD set is scheduled for an April release on the New York-based Times Square Records.

Producer-archivist Belden, renowned for his Grammy Award-winning reissue work on a series of Miles Davis boxed sets for Sony/Columbia, explains the genesis of Miles...From India. "Yusuf Gandhi, who heads Times Square Records, and I have had conversations about doing this for the past several years. Yusuf had the connection to India and an understanding of Indian classical music along with an appreciation for jazz and also fusion music. So we had some mutual interests there. At some point we were talking about potential projects and I was just in the process of doing the On The Corner boxed set. Of course, Miles incorporated tabla and sitar on those sessions from 1972, so I suggested revisiting Miles' Indian influenced music using some of those guys from On The Corner along with some Indian classical musicians and calling it Miles...From India. Yusuf said, 'Perfect,' and that was it."

Adds Gandhi, "Jazz musicians have always listened to Indian music and Indian musicians know jazz. Right now there are so many great young musicians in India that people in America have never heard of. You hear about the Ravi Shankar family and other prominent musicians from India, but you don't hear about the younger musicians who are out there doing innovative things. So we wanted to get some of them into the picture on this project."

With the Indian musicians first laying down the foundation of the tracks at studios in Mumbai and Madras, the Miles alumni then added on their parts back in the States. All the parts were then digitally edited into a coherent whole so that, for instance, on a tune like "Blue in Green" you get the sense of an organic, real-time call-and-response going on between Mike Stern's keening guitar lines (recorded in New York) and Shankar Mahadevan's impassioned vocals (recorded in Mumbai).

"All the forms were set based on my reduction of the song as a lead sheet," explains Belden, "and then Louiz figured out how to make it fit into the cultural norms of India. And the beauty of it is these Indian guys really know how to play that music. And once they got the groove in their mind, that was it. So essentially, everything we did was a first take. They showed up with their instruments, we rolled the tape and that was it."

"Jean Pierre" was similarly structured with the Indian musicians (Ranjit Barot on drums and Rakesh Chaurasia on flute) laying down their parts to a click track. Later on in the States, drummer Vince Wilburn and keyboardist Robert Irving III added their parts in Chicago while guitarist Mike Stern and keyboardist Adam Holzman added theirs in New York. "But I had Robert Irving reacting to what the Indian drummer put down when he played while Adam Holzman reacted to what Vince had played," explains Belden. "So you had all these people reacting to different things they didn't hear, and when you mixed them together it worked."

Belden adds that for this Miles...From India project he relied on technology that didn't exist five years ago. "We used the internet a lot in dealing with file sharing sites. And I was also able to use SKYPE to produce two sessions at the same time in different locations from my apartment. For 'It's About That Time' I had Ndugu Chancler playing drums on the West Coast and Robert Irving in Chicago playing Hammond B-3 organ, and we were all connected in a video conference via SKYPE. They were playing back their parts, suggesting stuff, conversing back and forth with me producing back in my New York apartment. In fact, you can make a whole record that way. You leave less carbon footprints
that way."

Gandhi, who also heads up the Hip-Bop label, admits that he is astonished by the seamless illusion of real time interaction that this digital technology is able to create. "Every time I listen to 'Spanish Key,' the way that Mike Stern comes into it when the percussionists are playing...it's almost as if he were there with them."

Some of the other highlights of this remarkable concept project include: a version of "All Blues" in 5/4 that features the regal rhythm tandem of bassist Ron Carter and drummer Jimmy Cobb (the latter recorded on the original 1959 Kind of Blue session); a 9/4 rendition of "So What" (also from Kind of Blue) featuring bassist Carter, pianist Chick Corea and drummer Ndugu Chancler interacting with a crew of Indian percussionists and konokol vocalists; a ripping, distortion-laced Pete Cosey electric guitar solo alongside Michael Henderson's groove-heavy electric bass lines, Dave Liebman's flute and Kala Ramnath's carnatic violin work on a fast version of "Ife" (from Big Fun and The Complete On The Corner Sessions); some melodic sarod playing by Pandit Brij Narain on a faithful rendition of Joe Zawinul's lyrical anthem "In A Silent Way"; some hauntingly beautiful muted trumpet work by Wallace Roney alongside Shankar Mahadevan's emotive vocals on "Blue In Green"; Marcus Miller's mysterious bass clarinet alongside Roney's trumpet and Ravi Chary's sitar on "Great Expectations"; and some potent, jazzy soloing from trumpeter Roney, tenor saxophonist Liebman and soprano saxophonist Gary Bartz on a
slow version of "Ife."

The lone commissioned work on Miles...From India is the stirring title track, composed, produced and performed by guitarist John McLaughlin with his Remember Shakti bandmate U. Shrinivas on electric mandolin, Louiz Banks on piano and Sikkil Gurucharan on vocals. 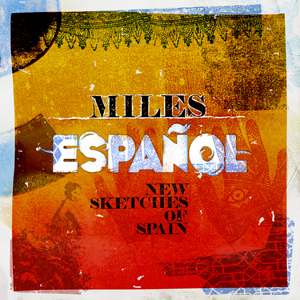 For this unique project, Bob Belden collaborated with a contingent of Spanish musicians at Sear Sound Studios to create the musical adventure Miles Espanol to be released on Entertainment One Music.Conceived and produced by Bob Belden in conjunction with executive producers Chuck Mitchell and Eli Cane, this double-CD contains selected material drawn from Miles Davis' Sketches Of Spain and Kind Of Blue. More than 30 musicians assembled to reinvent the music of Davis and create their own compositions including Chick Corea, Ron Carter, Jack DeJohnette, John Scofield, pianist Chano Domingez, drummer Alex Acuna, flautist Jorge Pardo, Sonny Fortune, Gonzalo Rubalcaba and Rabih Abu-Khalil. Some of the musicians are former Miles sidemen, some are flamenco masters from Spain, some are from North Africa, and some are prominent figures in New York's Latin Jazz scene.Tim Hagans, Scott Kinsey, and Vince Wilburn Jr. (Miles Davis' nephew). Many of the performers worked alongside Davis onstage and in the studio.