Named after an album by swing era violinist Stuff Smith, Black Violin is a violin and viola-playing hip-hop duo from Florida consisting of classically trained musicians Kevin Sylvester ("Kev Marcus") and Wilner Baptiste ("Wil B"), who incorporate a variety of genres into their distinctive string fare. The pair met as high-school students in a Fort Lauderdale performing arts program and formed the group after attending separate universities. Quickly gaining a reputation for their dynamic performance style, the duo received national exposure after an appearance with Alicia Keys at the 2004 Billboard Awards and winning the talent show Showtime at the Apollo in 2005. Amidst mixtape releases, they issued their eponymous debut album in 2008 and Classically Trained in 2012, earning support spots on tours for, among others, Wu-Tang Clan, Ciara, Aerosmith, and Kanye West along the way. In 2014, Black Violin signed with Universal Music Classics, which released their third LP, Stereotypes, in 2015. 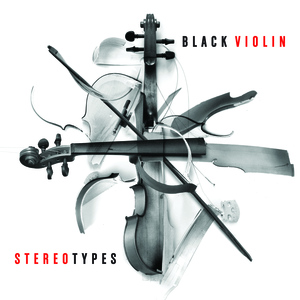 Wilner "Wil B" Baptiste (viola) and Kevin "Kev" Marcus Sylvester (violin) are Black Violin, a duo who radically fuse hip-hop and pop with classical music to create a kaleidoscope of sounds uniquely their own.  Classically trained musicians, they have opened for such diverse top names in music as Kanye West, 50 Cent, Aerosmith and Tom Petty, and also creatively collaborated with the likes of Wu-Tang Clan, Linkin Park, Wyclef Jean and Alicia Keys, the latter for the Billboard Music Awards. Set for release on September 18 on Universal Music Classics, their major label debut was produced by Eli Wolf (The Roots & Elvis Costello, Norah Jones).