"I wanted to use the word ‘animal' in the album title, because writing and recording this set of songs was like taming something that had a life of its own," Becca Stevens says of her revelatory new album Perfect Animal (April 2015).  "The title came from the track ‘Imperfect Animals' which I wrote about the instinct to strive for perfection pulling against the understanding that such a condition is not humanly possible. That's a big theme for me, and it's something that I go through in my daily life, in my relationships, and every time I write a song."

Perfect Animal marks a quantum musical leap for the North Carolina-bred, New York-based artist.  It boasts her most personally-charged songwriting and her most urgent, impassioned singing to date, along with vivid, adventurous arrangements that show off her fiercely expressive guitar work as well as the talents of her longstanding band: keyboardist/accordionistLiam Robinson and bassist Chris Tordini, both of whom Stevens has worked with since 2005, and drummer/percussionist Jordan Perlson, who joined three years later.

Although Perfect Animal was recorded in five different studios in three states, with Stevens and band recording with producer Scott Solter (renowned for his work with the likes of St. Vincent, Spoon, and the Mountain Goats), the album's seamless intensity remains consistent throughout. "That same push and pull that defines ‘Imperfect Animals' helped me make this album what it is," she explains.  "It wasn't a quick, easy birth; it was a long labor of love.  We worked on it for over a year, recording in different places and putting all the pieces together as they came. This was the first time that I was really hands-on with the technical side of making a record. I handled a lot of the editing myself which was grueling at times, but it was also extremely rewarding, as I learned a ton, and I can truthfully say that at the end, even after knowing every track inside out I'm not tired of it, I still love it, and I'm very proud of every single piece."

"The recording process was an intense experience," Stevens adds.  "I recorded my vocal tracks, backgrounds included, in a one-week marathon at the very end, which I think gave my singing an edge.  It was physically and emotionally extreme to focus on one thing for ten or twelve hours a day for a week, and there were times in the studio where I was on the verge of tears, mentally and physically exhausted, but I was able to sing through it.  And because I felt so inspired and so invested in this project, by the next morning I'd feel refreshed and ready to do it all over again."

The multifaceted singer-songwriter-guitarist has already won widespread acclaim and built a loyal fan base, both for her own visionary releases and for her work as a versatile collaborator who has lent her talents to a diverse array of projects with a wide assortment of rock, pop, jazz and contemporary classical musicians. Weightless, her 2011 breakthrough album with the Becca Stevens Band, was widely celebrated by critics and fans alike, establishing Stevens as a startlingly original creative force with a seemingly limitless future.

"The concept behind recording Weightless was to document the songs exactly as we played them live," Stevens says. "But for Perfect Animal, I chose to take advantage of the opportunities of being in the studio, and spend time crafting the sonic landscape of each individual song. It was an inspiring challenge to craft this larger sound, while still maintaining the complexity and dynamics of the arrangements."

Perfect Animal also showcases Stevens' instinctive, organic rapport with her band mates.  "It's a real band," Stevens asserts. "They make my songs sound like an extension of my voice and the music in my head. I wrote these songs with their voices and abilities in mind, and when I brought these new songs to them, they understood right away what I was looking for." The musicians' vibrant chemistry is apparent throughout the ten-song Perfect Animal. Such bracingly memorable tunes as "I Asked," "Be Still," "Reminder" and  "Imperfect Animals" are emotionally raw and musically inventive, exploring an expansive sonic palette that lends depth and immediacy to Stevens' sharp lyrical insights.

In addition to Stevens' own compositions, Perfect Animal features a trio of judiciously chosen cover tunes-Frank Ocean's "Thinkin Bout You," Usher's"You Make Me Wanna…" and Steve Winwood's "Higher Love"-which are uncannily well-matched with the thematic concept of Stevens' own tunes, while demonstrating her ability to connect with a wide range of material.

"I like arranging other people's songs because it's a nice way to take a break from my own process." says Stevens, who has earned a reputation for bold choices in outside compositions.  "It's like a short vacation from my own story, where I can use my colors to paint a portrait of someone else.  And then if I do that well, and maintain my voice in the process, maybe listeners will be drawn into my own songs through that framework."

The level of commitment that makes Perfect Animal such a rewarding listen has been a constant in Becca Stevens' lifelong musical journey.  The daughter of a composer/multi-instrumentalist father and an operatically trained singer mother, she was born to the sound of her dad playing an Irish fiddle tune in the delivery room.  She was just two years old when she began singing in her family's band, the Tune Mammals.  Growing up in Winston-Salem, NC, she spent much of her childhood on stage, singing, acting and dancing, including a yearlong tour in the lead role of The Secret Garden when she was ten.

In her teens, Becca studied classical guitar, and maintained an affinity for her home state's Appalachian folk music traditions, while also developing her voice singing jazz standards with her peers and mentors in local clubs. After graduating from the high school program at the North Carolina School of the Arts with a major in classical guitar, she moved to New York to attend The New School for Jazz and Contemporary Music. It was there that she received a BFA with high honors in vocal jazz and composition, and where she met the musicians with whom she formed the Becca Stevens Band.

Stevens quickly began building a diverse body of work, and earning the respect and admiration of her peers.  She launched her recording career with her well-received 2008 debut album Tea Bye Sea, which the New York Timescalled an "impressively absorbing album," and its even more popular 2011 follow-up Weightless.

Stevens has also emerged as an in-demand collaborator, lending her vocal, compositional and instrumental skills to a stunningly diverse array of projects. Since 2004, she has served as a lead singer of Travis Sullivan's Björkestra, fronting a genre-bending 18-piece jazz orchestra interpreting the songs of Björk on three albums and countless live performances. She has also toured, recorded and written lyrics for jazz pianist Taylor Eigsti, singing on five songs on his landmark 2010 album Daylight At Midnight.  She performed at Carnegie Hall as featured singer with jazz pianist Brad Mehldau, and premiered new works and performed at Carnegie Hall and the Newport Jazz Festival in collaboration with Gretchen Parlato and Lionel Loueke.

Stevens has also toured as part of drummer/composer Eric Harland's all-star band, written for and duetted with up-and-coming vocalist José James, and has written, recorded and/or performed live with such notable artists and players as Esperanza Spalding, Ambrose Akinmusire (for who Stevens composed the song "Our Basement (Ed)" which was listed as one of NPRs Top Songs of 2014),  Dave Douglas, Gabriel Kahane, Tal Wilkenfeld and Aya Nishina – among many others. In 2014 Stevens was a featured vocalist on the Grammy-Nominated Billy Childs record Map to the Treasure: Reimagining Laura Nyro – produced by Larry Klein

2010 saw the debut of Stevens' first choral composition, Soli Deo Gloria, commissioned and performed by the Melodia Women's Choir in New York. That piece was also commissioned to be reworked for jazz choir and performed at the New England Conservatory.  More recently, she was a featured composer in the Mainly Mozart concert series in San Diego, for which her compositions were arranged for string quartet by her fatherWilliam Stevens and Stephen Prutsman (Sigur Rós, Tom Waits, Kronos Quartet), and performed by Becca with the DeCoda String Quartet.  She is also a featured singer and composer in Work Songs, a new work by Timo Andres, which premiered as part of the Ecstatic Music Festival in New York along with a world premiere of Stevens' "A Contribution To Statistics", a setting of a poem by Wisława Szymborska which Becca wrote for Gabriel Kahane, Ted Hearne, Nathan Koci, and Timo Andres.

Stevens has worked extensively as an educator, teaching private lessons and master classes on the voice and songwriting all over the world. She's been on the faculty teaching classes in vocal performance, ensemble instruction, musicianship, and private lessons at the Manhattan School of Music and The New School, as well as various prestigious institutions in Belgium, Switzerland and the Netherlands. She also participates in musical education efforts in American high schools, prisons and homeless shelters.

"The last couple of years for me have been a time of strengthening my voice as an artist and as a human," Stevens concludes.  "And I can absolutely hear that in these songs."

"The in-your-faceness of Perfect Animal is so different from Weightless that it's hard to predict how it will be received," she notes.  "All I know is that I love the way it sounds, and that there's not a single part that I'm not proud to call my own." 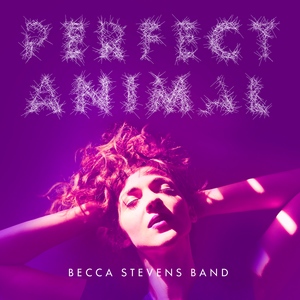 Becca Stevens is one of the most talented young artists in any genre – the New York Times says she is "a vocalist and guitarist who balances deep melody against lyrical caprice." With the new Becca Stevens Band album Perfect Animal, coming April 7th on Universal Music Classics, she has sharpened her voice as a songwriter and bandleader. Stevens filters her myriad influences (indie rock, R&B, jazz, West African music, folk) into a singular, electrifying sound on Perfect Animal. The album is produced by "recordist"Scott Solter(St. Vincent, Mountain Goats, Spoon) and mixed by Matt Pence (Midlake, Yuck, Here We Go Magic). Solter helped the band capture the energy they bring to live shows as well as a musical weight and intensity that had always bubbled under the surface.