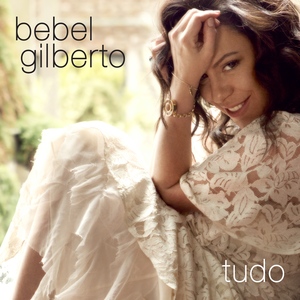 World renowned, multi-Grammy-nominated singer-songwriter Bebel Gilberto will heat up the summer season with her trademark blend of warm Brazilian rhythms and ethereal vocals when her first new studio album in five years, Tudo, is released August 19 on Portrait/Sony Music Masterworks.    The intoxicating new 12-track collection celebrates Gilberto's penchant for sonically transporting listeners to Brazil, with bright, incandescent bossa nova-infused melodies, lyrics about love, and a lilting performance style that has earned her a devoted fanbase worldwide.

"For me, this album came straight from the heart, and the recording process was one of the most intense I have ever been through," said Gilberto.  "A good part of the album was recorded in LA, and you really feel that lighter, brighter west coast vibe in the music, mixed in with my darker ‘New Yorker' feelings.  Tudo means ‘everything' and as a Brazilian, I feel everything and live every moment deeply, and wanted to sing about each little moment, emotion, idea, melody that has been part of my life over the past year. I am loving life and living more passionately than ever and wanted to share all that!"

Recorded in Brazil, New York and Los Angeles this past winter, and produced and mixed by Mario Caldato Jr., Tudo features six new original tracks including the captivating standout English language track "Somewhere Else,"  the soft "Nada Não," filled with hypnotic percussion touches including the marimba, wood bongos, shakers and even bottle caps; "Tom de Voz," which features Gilberto teaming up with acclaimed songwriter and guitarist Cesar Mendez from Bahia, who Gilberto met through mutual friend Caetano Veloso and who penned the track; and the delightful  duet "Novas Idéias," which Gilberto co-wrote and performed with her longtime friend Seu Jorge.

Gilberto also masterfully reinterprets the Antonio Carlos Jobim classic "Vivo Sonhando," and pays homage to one of her personal favorites, Neil Young, with a beautiful cover of "Harvest Moon," which Gilberto originally sang - and debuted her guitar skills on - at the "Music of Neil Young at Carnegie Hall" tribute in NYC in 2011.  Jon Pareles of The New York Times praised the performance saying, "Ms. Gilberto turned ‘Harvest Moon' into a whispery bossa nova that savored every bit of its romance."

An outstanding band of assorted longtime musical friends and collaborators joined Gilberto in the studio to lend their talents to Tudo  including Masa Shimizu on assorted guitars, Didi Gutman (of Brazilian Girls fame) on piano, percussionist Mauro Refosco, Joey Altruda and bass and guitars, and Kassin on electric and acoustic bass and guitars.

Gilberto captured fans and media acclaim worldwide with her hit breakout album Tanto Tempo in 2000, which featured her trademark electronic bossa nova, taking over clubs around the world and positioning Bebel as one of the top-selling Brazilian artists in the U.S. since the '60s. Critically-acclaimed albums to follow included Bebel Gilberto (2004), on which she refined her sound to create an acoustic lounge style that showcased her strengths as a Brazilian composer, and Momento (2007), which masterfully showcased her skills at fusing all her musical styles, and the Grammy-nominated All in One (2009), which brought to forefront more of Bebel's personality and love for organic rhythms.  Bebel Gilberto also recently released a beautiful concert DVD called Bebel Gilberto in Rio in Brazil in 2013.

The multi-Grammy-nominated Bebel Gilberto will release her new album Tudo on Portrait/Sony Music Masterworks in August 2014; her first studio recording in five years. Tudo, which means "everything" in English, showcases Bebel's ethereal vocals and wistful, dreamy song writing in each of the album's 12 tracks. Inspired by living in Rio de Janeiro and New York City, Bebel has exquisitely fused musical influences from both cities in every track. Her sultry tonality is constant throughout Tudo as are the warm and playful Brazilian rhythms created by wood bongos and shakers. Bebel's intimate vocals hint at a fantastical Rio de Janeiro and the gorgeous melodies are shaped by touches of electronica.

Over the past five years, Bebel has been tucking away musical gems, from joyful melodies to reflective, romantic lyrics, in preparation for Tudo. In 2013 while working in Brazil on the Bebel Gilberto in Rio DVD, the rhythms began stirring inside her. Although she was asked to rest in order to combat exhaustion, Bebel believed it was the right time to record; she knew the music would be strong. Despite the challenges of 2013, Bebel always finds time to spend with friends, walk on the beach, and to enjoy the view of the Manhattan skyline from her rooftop garden.  Bebel assures, "I'm a good bon vivant who knows how to live." Perhaps Bebel's most intimate recording to date, Tudo captures the human vulnerabilities that bring both sorrows and joy.

Tudo was recorded in Brazil, New York City, and Los Angeles; produced and mixed by Mario Caldato Jr. in early 2014. Bebel was able to gather her favorite musicians from all over the globe, liberally using the words "amazing," "beautiful," "heaven," "a luxury" to describe their talents and contributions to Tudo. Bebel chose to work with the producer Mario Caldato Jr. because, as she put it, "I'm so eclectic, I needed one producer to translate it all."

Gilberto was born in New York to Brazilian music icons João Gilberto and Miúcha. Her musical education was her childhood in Brazil. She was surrounded by extended family including her uncle Chico Buarque and family friends like Milton Nacimento, Tom Jobim, Caetano Veloso, and João Donato; she made her first recording at age 7. "I just turned 48, so it's been 41 years" exclaims Bebel with a laugh, "I'm really proud, but tired too!"

Bebel's life-long eclectic musical tastes are made palpable when listening to Tudo. In addition to living and breathing all types of Brazilian musical styles as a child, she was exposed to the greats, from Debussy to Prince; Michel Legrand to Billie Holliday; Bjork to Gershwin. Also evident on Tudo is her love for North American soul; she discovered Donna Summer, Earth Wind and Fire, and Michael Jackson on the dance floor as a budding teenager. "The whole disco thing plays a big role in my heart," says Bebel, who still loves to dance.

Several years after Bebel moved to New York City in 1991 her present day sound of electronic meets Brazilian began to crystallize. "Little by little, I learned what I wanted musically," says Bebel, who gigged all around the city and collaborated with many artists. She established a weekly gig at The Greatest Bar on Earth, on top of the World Trade Center in the early 1990's that drew a fervent international crowd. "At that gig, everything started to come together," says Bebel. "I think there I became a New Yorker-with a Brazilian heart of course!"

Tudo is sung in Portuguese, English and a touch of French. Bebel was delighted to finally record a duet with Seu Jorge, a friend for more than 20 years; their "Nova Idea" is a sexy mix of harmony and charm. Tudo features a mix of original tracks written or co-written by Bebel as well as other composers like Cesar Mendez, who also plays guitar. She covers the Jobim classic "Vivo Sonhando," and sings a devastating version of Neil Young's "Harvest Moon," which she preformed in 2011 at Carnegie Hall, and also made her debut playing guitar.

Tudo musicians include Masa Shimizu on guitar, who is one of Bebel's long-time collaborators.  Of Masa, Bebel says, "He can read my mind!" Didi Gutman of Brazilian Girls fame plays piano and percussionist Mauro Refosco plays a variety of drums and even bottle caps. Liminha, who was part of Mutantes, also co-produced Tudo, along with Kassin, who plays electric and acoustic bass and guitars. The extremely talented Miguel Atwood-Ferguson created the string arrangements, as well as a magical new sound, which according to Bebel was the cherry on top of the cake.