In 1940, an enterprising group of women formed a string quartet, playing in their own homes. Bobby Lorio, Sylvia Weiss, Ione Ramsey and Mayme Sue Ruhl Welch dreamed of having a symphony that would provide music for the entire community. Bobby Lorio and her husband, Dr. Cecil Lorio, were instrumental in organizing and supporting the drive to develop the first orchestra. Their energy and financial support in these formative years brought the dream to fruition. By Wednesday, February 5th, 1947, that dream became a reality and the four women participated as members of the new Baton Rouge Civic Symphony Orchestra as the orchestra gave its first concert in the Baton Rouge
High School Auditorium.

The orchestra consisted of 60 musicians from Baton Rouge, New Orleans, Southeastern Louisiana Institute (now SLU) in Hammond and Southwestern Louisiana Institute (now USL) in Lafayette. Frederick Kopp conducted the first concert. Three concerts were held during the season, and the first soloist to appear with the orchestra was violinist Miriam Solovieff. The season closed with a performance of the Redemption by Charles Gounod.

In the 1948-49 season, four complete concerts were presented by the symphony's new conductor, David Forrester. A newly established chamber recital series, sponsored by the orchestra, was inaugurated with two world-famous soloists, Mischa Elman, violin, and Amparo Iturbi, piano. A highlight of the 1949-50 season was the appearance of the Baton Rouge Boys Choir, conducted by Carver Blanchard. Another development was the inauguration of a children's series designed to introduce serious music to Baton Rouge youth by having the symphony perform
in the schools.

The orchestra also had a new conductor, Orlando Barera, who resigned as assistant conductor of the Houston Symphony to come to Baton Rouge.

The 1950-51 season was a very bright one for the orchestra as the season was extended to include six subscription concerts, in addition to the youth concerts and the chamber recital series, with Amparo and Jose Iturbe as recitalists. The board of directors re-elected Dr. Cecil Lorio as president, and unanimously voted Bobby Lorio permanent honorary president of the Baton Rouge Civic Symphony Association. Conductor Richard Korn replaced Alfredo Antonini, who could not honor his new contract because of his responsibilities as music director of CBS in New York.

Several years after its inception, the Symphony appointed its first long-term conductor. Maestro Emile Cooper, who had retired as conductor of the Metropolitan Opera Orchestra in New York City, was hired at the beginning of the 1951-52 season. His talent and international fame brought a new level of professionalism to Baton Rouge. Cooper remained as conductor of the Baton Rouge Civic Symphony through the 1959-60 season. That same season the orchestra moved to the new Lee High School Auditorium. He was to lead the symphony in the 1960-61 season, but became very ill and was unable to conduct the first concert.

Dr. Peter Paul Fuchs, a native of Vienna, Austria, and professor of conducting at Louisiana State University, was engaged to conduct the opening concert on October 19, 1960, to fill in for the ailing Maestro Cooper. Cooper informed the Association that he was too ill to return for the second concert on November 16, which was then also conducted by Dr. Fuchs. On that very evening Maestro Cooper died in Roosevelt Hospital in New York. Fuchs was contracted to finish the season.

Fuchs was engaged as the permanent conductor for the 1961-62 season, a position he held until his retirement from LSU in the spring of 1976.

When the beautiful new theater was opened in the LSU Union in 1964, the Baton Rouge Symphony moved its performances to that facility. The new hall afforded audiences the ambiance, comfortable additional seating, air-conditioning and better acoustics.

The 1970s brought spectacular growth in the size of the orchestra's audiences, and in the financial support received from individuals and the business community. During this decade, the orchestra changed its name to the Baton Rouge Symphony Orchestra. The size and quality of the orchestra had grown to that of a metropolitan class group, and international soloists were again being brought in to perform. A professional manager and staff were added to the budget of the association. The decade concluded with the 1979-80 season with the orchestra having its own home in the new Centroplex Theater for the Performing Arts in
downtown Baton Rouge.

The orchestra hired James Yestadt, LSU professor of music, to conduct the 1976-77 season. Yestadt remained in this position until his retirement at the conclusion of the 1981-82 season. The 1980s proved to be fruitful for the Baton Rouge Symphony Association. The season expanded to seven subscription concerts, and the orchestra began playing concerts in surrounding towns and communities. During these years, the Louisiana Youth Orchestra was formed. The Baton Rouge Choral Society, formed by Victor Klimash, performed on numerous occasions with the BRSO. This organization, now conducted by Dr. Kenneth Fulton, officially became the Baton Rouge Symphony Chorus.

James Paul, assistant conductor of the Milwaukee Symphony Orchestra, became the new conductor of the Baton Rouge Symphony Orchestra for the 1981-82 season. Under the leadership of James Paul, the orchestra became a well-disciplined, highly recognized artistic entity. The jewel in the crown of artistic excellence was its triumphant performance on October 22, 1988 at Carnegie Hall in New York City. Guest artist Abbey Simon joined the orchestra for a performance of Beethoven's Piano Concerto No. 4. The program included Chadwick's Jubilee from Symphonic Sketches and Sibelius' Symphony No. 2. The orchestra received excellent reviews in New York newspapers, as well as the Morning Advocate and State-Times. Also rewarding was the full house in attendance, of which only a small percentage was from Baton Rouge. The Baton Rouge Symphony Orchestra
had arrived.

In the early 1980s the Baton Rouge Symphony held several seasons of pops concerts in the Centroplex Coliseum conducted by James Yestadt. These indoor concerts, offering a lighter fare for early summer listening, featured such artists as Jimmie Davis, Pete Fountain, Chet Atkins and Gordon McRae. Though these concerts were discontinued, interest in a pops series remained high.

The first Friday Night Live at the Pops concert was December 23, 1989. A near capacity crowd braved cold weather to hear the orchestra in a program of Christmas favorites. The concert was conducted by Victor Klimash and featured the Baton Rouge Symphony Chorus. These Holiday Pops concerts have become
very successful.

Additional growth took place in the 1990s. The Pops series grew to four pairs of concerts during the regular concert season and five outdoor Summerfest concerts during the early summer months performed at the Hemingbough Conference Center near St. Francisville. For the 2001-02 season the Pops and Summerfest series were combined to create the Summerfest Pops series-a lengthened season of concerts on the grounds of Hemingbough.

In August 1993, the Baton Rouge Symphony Association changed its name to the Louisiana Symphony Association, laying the groundwork for possible future expansion. The Baton Rouge Symphony Orchestra retained its name. The association purchased its own office building on Brookline Avenue as its permanent headquarters. In June 1998 James Paul announced his retirement as musical director and conductor.

During the Baton Rouge Symphony's 50th anniversary season, six talented candidates competed for the opportunity to become the maestro to lead the organization into the next century. In May 1999, Timothy Muffitt was selected as the new music director and still currently hold the position.

In August of 2002 the BRSO sold its office building on Brookline Avenue and relocated twice before settling into its current location in February 2005 within the Shaw Center for the Arts building in downtown Baton Rouge. It is at this location where the BRSO helped house the Louisiana Philharmonic Orchestra administration from August 2005 till June of 2006 following the aftermath of Hurricane Katrina when the LPO was able to relocate back to its offices
in New Orleans.

Following the cancellation of a Masterworks concert in September of 2005 due to hurricane Katrina, the concert was eventually rescheduled in April as a joint concert between the LPO and BRSO with all the members of both orchestras performing Mahler's 5th Symphony and then repeating that performance again in New Orleans. The concert won "Best Classical Music Performance" in Gambit Weekly's 13th Annual Tribute to
Classical Arts Awards.

With the addition of a performance of Handel's Messiah at the downtown First Baptist Church, the Barbecue of Seville family picnic & concert at the Baton Rouge Community College's Magnolia Performing Arts Pavilion, the expansion of the Chamber Series into the Manship Theatre & St. Joseph's Cathedral in downtown Baton Rouge as well as special concerts at venues in Plaquemine, Slidell and on the lawn of the State Capitol for the Louisiana Book Festival; the Baton Rouge Symphony Orchestra season now contains over 60 concerts held in over 12 venues across the state of Louisiana. 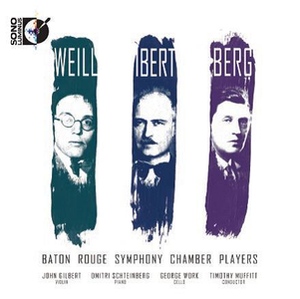 Sono Luminus, together with the Baton Rouge Symphony Chamber Players, brings together the works of three contemporary composers in this latest release, Weill - Ibert - Berg. The son of a cantor, Kurt Weill was born in Dessau into a family that took in his teens the director of the Dessau Hoftheater, Albert Bing, encouraged him in the study of music. Weill briefly studied composition with Engelbert Humperdinck and was already working professionally as a conductor when he attended composer Ferruccio Busoni's master classes in Berlin. Delighted to see the positive responses of an audience to his first collaboration with playwright Georg Kaiser, Der Protagonist (1926), he thereafter resolved to work toward accessibility in his music.