Acknowledged by The New York Times for his "exquisitely sensitive playing" and "stunning agility", Grammy-nominated mandolinist Avi Avital is one of the world's most exciting and adventurous musicians. He is deeply committed to building a fresh legacy for the mandolin through virtuosic performance in a range of genres and commissioning new works for mandolin.

Avi Avital is the first mandolin player to receive a GRAMMY nomination in the category "Best Instrumental Soloist" (2010) for his recording of Avner Dorman's Mandolin Concerto (Metropolis Ensemble/Andrew Cyr).   He has won numerous competitions and awards including Germany's ECHO Prize for his 2008 recording with the David Orlowsky Trio and the AVIV Competition (2007), the preeminent national competition for Israeli soloists.

Born in Be'er Sheva, southern Israel in 1978, he began learning the mandolin at the age of eight and soon joined the flourishing mandolin youth orchestra founded and directed by his charismatic teacher, Russian-born violinist Simcha Nathanson.   He later graduated from the Jerusalem Music Academy and the Conservatorio Cesare Pollini in Padova, Italy where he studied the original mandolin repertoire with Ugo Orlandi.

Avital has released various recordings in the disparate genres of klezmer, baroque and contemporary classical music. He now records exclusively with Deutsche Grammophon and his debut release featured his own transcriptions of J S Bach Concertos for harpsichord and violin. His second disc "Between Worlds" introduced chamber music compositions from Ernest Bloch and De Falla to traditional Bulgarian Folk tunes and was released in 2014 to critical acclaim.  He records Vivaldi Concertos with the Venice Baroque Orchestra for release in 2015. 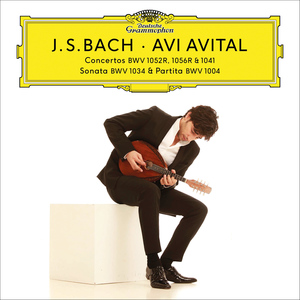 Art of the Mandolin