There is no other voice in fado as of Ana Moura . A voice that walks by tradition freely, while elegantly flirt with pop music, extending a very personal way the operating range of the song of Lisbon. But what sets it apart is not only a serious and sensual timbre as a few - Ana Mourainstantly turns into fado any melody that touches your voice. It is an immediate fuse, triggered an emotional outburst without contemplations to the heart of the listener.

Fausto Jose Afonso, Ruy Mingas, Angolan music and fado. It was this that was sung in the family firesides Moura in Coruche, was Ana Mourajust a scull - born in another locality Ribatejo, Santarém, in 1979 - with ataste for singing. Parents sang, the whole maternal family sang and any family reunion reason ended with a celebration in the form of music.While all sing, Ana began already to feel that for some reason, had a special affection for fado. At six already sang her first fado, "Dapple Horse" while often heard the mother croon "My Mother The Shawl". Then came adolescence and left the sleeping fado. And awakened to other types of music, more consistent with the age and secondary school friendships.

It is with this curiosity for other songs, in full adolescence discoveries and rebelliousness that Ana Moura reaches Carcavelos, 14 years old, to the 10th year. Enough not to sing, but to study, signing up then in the Music Amateurs Academy. But is the schoolmates who joins for the first band. While singing other genres, the truth is that, left to their own devices, the voice of Ana quickly sticks to fadista registration and thus even with rock groups will managed to include one or two fates in the repertoire - usually "People who Washes in Rio, "Amalia at that stage its maximum reference as an interpreter.

Experience with this cover band, The Sixth Sense, then ends up driving to early recordings of a pop record / rock with musician Luis Oliveira, whose launch was part of the Universal multinational agenda. The disk, however, fails to be finished. In comes the destination and leads Ana Moura to a bar in Carcavelos where yields to temptation and sings fado.In the room, guitarist Antonio Parreira, so impressed, takes her hand and leads her to several fado houses. By the time that a Christmas party of musicians and singers, Ana Moura is brought to the society of those who would live their nights thereafter and is invited to sing. This time is Maria da Fé, co-owner of the prestigious house of fado Senhor Vinho, who does not stand up to that raw talent. The applause, Maria da Fé joins the invitation to sing at home.

It is precisely these nightscapes, the Lord wine but also of other fado houses that begins to attend, which gives the true school of his corner.Before, Ana Moura sang fado because yes, because intuition sent him, because his mouth was fleeing for her there. Now, the teachings of the most experienced - especially Maria da Fé and Jorge Fernando - give you other whys without killing her spontaneity.

This passion manifests itself in such a way that quickly conquer Miguel Esteves Cardoso (MEC). Before even the publishers you hear your name, it is the writing MEC serving amplifier to the news of the talent of the young singer, after the hearing and seeing act in Antonio Pinto Basto program on BBC1 called Fados de Portugal. It is even after reading the words of MEC enlevadas the Independent that Toze Brito, Universal administrator, go to the Lord wine to the discovery of that voice I knew only of Sixth Sense. Do not delay to offer you the recording of the first album. For the production of the debut album, Keep me Life in Hand(2003), is called Jorge Fernando. Actuates the artistic direction of the album, the musician is also responsible for six of the 15 recorded themes, one of which is assumed by the singer as his musical BI - "I do Fado, Fado singer I am." The complicity between the two there-to keep the following records. Soon there, it is clear that the fate of Ana Mouraholds a rare elasticity, inviting participation of people like Gypsies d'Ouro and Pedro Jewelry and instruments with the cajon and flamenco guitar.But the essence remains untouched: the tradition not budge. The reception, criticism and public, Keep me Life in Hand is an enthusiasm that leaves no doubt and Ana Moura will immediately begin to become recurring presence in the Portuguese stages and gradually also in international.

It happened in 2004, it is the logical continuation of the debut album. In the case of a double album reveals a surprising ambition on the part of the singer, while vinca with amazing confidence sure of his way: the natural coexistence between the more attached fado tradition and a very personal way and convinced it requires contemporaneity.

The career Ana Moura begins to take a breath size as the singer eventually leave the Lord wine, in order to meet the many invitations that will getting to play abroad. This lack is later filled by the integration of the cast of a new house of fado in Alfama, name Linhares House - Bacalhau de Molho. Internationalisation then leads Ana Moura to act in the mythical room Carnegie Hall in New York in February 2005. Across the world, saxophonist Tim Ries Rolling Stones enters the Tower Records in Tokyo looking for fado records. It takes longer in the head the idea to include a singer in the second volume of the Rolling Stones Project, a project led by you inviting people from other musical tides to interpret themes of Stones in collaboration with one of the historical band members. For three CD in the dark, by mere instinct, and it was love at first listen. For the record, Ana writes "Brown Sugar" and "No Expectations". Live interprets the latter with the Stones at Alvalade XXI Stadium. From there on several occasions, the digressions of Ana Moura and the Rolling Stones coincide in the same sites. In one, in San Francisco, Ries calls the singer and shows him a song composed to think of his voice. "Old Angel", enter the following disk Ana Moura ,Beyond Longing (2007), after "afadistado" by an arrangement of Jorge Fernando.

One of the strengths of Beyond Saudade , by the way, would be the rare participation of Faust in a foreign disk. Ana, who had grown up listening to the author of In This River Above, lost shame and asked him for a composition. Another of the invited authors, this time expressly composed for you, was Amelia Muge. The exchange with other cultures then was on account of a duet with Spanish singer Patxi Andión history.Tim Ries, and author, also let your printed saxophone in two disk themes - "Old Angel" and "The Alone with the night." Thanks to the theme "Búzios", Jorge Fernando, the success of Beyond Saudade had to climb to unprecedented levels in the career Ana Moura , eventually enjoy two great moments of consecration in Portugal through action in the coliseums of Lisbon and Port. The album also bring you would Award Amalia Rodrigues.

After the huge success of Beyond Saudade - for 70 weeks on the chart of best - selling when the fourth album hits stores - editing takes me to Fados (2009) is greeted almost immediately with getting the platinum award . As usual, it is produced by Jorge Fernando and has letters of Toze Brito, Manuela de Freitas, Mario Rainho and Nuno Miguel Guedes, as well as an original composition José Mário Branco. The album includes more a creation commissioned inventiveness Amelia Muge."Not a Fado Normal" with the participation of the Lisbon Pipers and vinca the distinguished path of the singer, of course rest soon in the title itself.

In May 2009, after a first telephone contact, Prince moves purposefully to Paris to witness in front of the charm of the singer at La Cigale room.The July 18, 2010, Ana Moura again put fado a great show of pop / rock universe, to take the stage with Prince the musician concert encore at the Super Bock Super Rock Festival in Meco. Together they interpret a Portuguese version of "Walk in Sand" and the traditional fado "I will give to drink the pain."

In September 2010, Ana Moura accepts the invitation of the Frankfurt Radio Bigband to sing in two concerts in the German city, and the repeated partnership, but this time in reverse when the singer called the jazz orchestra to accompany her in April 2011, on his return to the Coliseum in Lisbon and Porto. For Ana Moura is a time of celebration of a year marked by winning a Golden Globe, the presence on the Billboard sales tops and Amazon and the appointment as Artist of the Year for the British magazine Songlines Awards. Past few months, in August, takes the Back2Black festival stage, in Rio de Janeiro, alongside Gilberto Gil to, who plays the "Fado Tropical" by Chico Buarque.

In 2012, the year that Ana Moura participated in the tribute album Caetano Veloso with a version of "Open Window # 2", produced by José Mário Branco, the singer keeps a small change in his musical language.In November in Portugal launches its 5th studio album " Desfado " which is a turning point in his career, and presents his latest work in rooms exhausted by Portugal.

" Desfado " is already considered a classic album in Portugal. It remains continuously in top sales since it was launched (for 150 consecutive weeks), having recently reached the 5th Platinum. This is the national album released in the past five years sold in Portugal, the disc globalizedAna Moura . The first edited by Universal Music globally, through Decca, reached the 1st place several times in Portugal, having reached the 1 of the top's World Music in England, Spain and the United States. "Desfado " brought together some of the best contemporary composers and the single that gives it its name became the first fado to be played in national mainstream radio. The tour " Desfado " led Ana Moura to large national and international stage, singing to crowds in more than 300 concerts held after editing " Desfado ".

" Moura ", the 6th album of Ana Moura , published in Portugal on November 27, 2015, was directly awarded the gold record mark. From his corner, we know only that he was born in fado. We will never know where it ends. 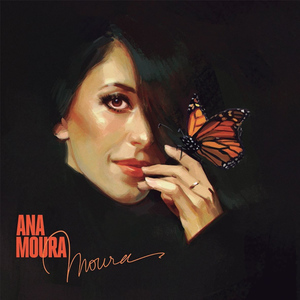