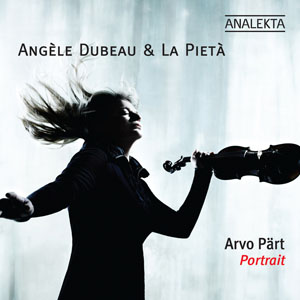 Following a highly successful venture in Philip Glass' soundscape, Angele Dubeau now goes on the trail of Estonian composer Arvo Part. Frequently referred to as meditative, Part prefers to describe his music as a light going through a prism, every listener perceiving it in a different way. Angele Dubeau is revisiting Tabula rasa, Spiegel im Spiegel and Pilgrim's Song. An essential album for this era when nothing seems to be stoppable.

I could compare my music to white light which contains all colours. Only a prism can divide the colours and make them appear; this prism could be the spirit of the listener. (Arvo Part)

For 30 years, specialists have deconstructed the music of Arvo Part in their efforts to grasp the subtleties of his musical language. Likely troubled by the almost instant sense of calm his work evokes, or perhaps seeking to extract its substance for their own purposes, they refer constantly to minimalism, a label Part himself steadfastly rejects. "Two composers, Philip Glass and Steve Reich, changed the world at that time," he says. "I have great respect for them. Still, I am not a minimalist. I understand that music critics will always find categories for my works and put them away in suitable drawers, but to call me a 'holyminimalist' sounds a bit ridiculous."

Yet there are uncanny similarities between the careers of Reich and Part, who both started out exploring serialism-one in the U.S., the other in Estonia-before realizing the limits of the language. Both men, who have since become friends, then subsequently looked to early music as a source of inspiration. In the late 1960s, Arvo Part gave up composition entirely for a time after a serious creative crisis, before studying medieval composers such as Josquin des Pres, Guillaume de Machaut, Jacob Obrecht, and Johannes Ockeghem. This research led to the composition, in 1976, of the now well known piano piece Fur Alina; it was a radical break with his previous work and it paved the way for a completely new style, which P?rt himself would describe as "tintinnabulum." "I work with very few elements-only one or twovoices. I build out of primitive materials: the perfect chord, a specific key. The three notes of a triad are like bells. And that is why I call it tintinnabulum."

The next year, in 1977, Arvo Part completed three of his most important works: Fratres, Cantus in Memoriam Benjamin Britten and Tabula Rasa. In Cantus in Memoriam Benjamin Britten, for string orchestra and tubular bell (which acts as the work's tonal centre), a descending A-minor scale, treated canonically, becomes a tangle of melodic lines which are almost impossible for the ear to decipher, exploring the ensemble's entire sonic spectrum, from triple piano to triple forte. "Why did the date of Benjamin Britten's death-December 4, 1976-touch such a chord in me? During this time I was obviously at the point where I could recognize the magnitude of such a loss. Inexplicable feelings of guilt, more than that even, arose in me. I had just discovered Britten for myself. Just before his death I began to appreciate the unusual purity of his music-I had had the impression of the same kind of purity in the ballads of Guillaume de Machaut. And besides, for a long time I had wanted to meet Britten personally-and now it would not come to that."

A similar search for simplicity permeates Tabula Rasa, a fragmented Baroque concerto grosso, written for two solo violins, strings and prepared piano (screws placed between the piano strings allow them to resonate like bells) that perplexed the musicians who premiered it, causing them to ask, "but where is the music?" Yet the refined pages of the score reveal a great deal. As he explained to the singer Bjork, his new style was simple: "one line is my sins and the other line is forgiveness. Mostly the music has two voices: one is more complicated and subjective and the other one is clear, simple, objective." Hence, the important thing is not which notes are played, but instead the combinations in which they are played. The omnipresent chord lends the work a certain profundity, the harmonics creating layers in much the same way ringing bells continue to resonate indefinitely, the ear not being able to determine the exact moment when they stop vibrating.

Spiegel im spiegel was completed in1978, just before Part left his native Estonia, where he had long suffered censorship. "I was writing music in which there were many notes thrown down on the page like so. Notes were being strewn about like coins or jewels. I was not guarding these notes as treasures. I was not holding them, one after another, in my hands. Every note is decisive, every note is telling." The title of this work, which means both "mirror in the mirror" and "mirrors in the mirror," refers to the multitude of reflected images that can be produced by parallel plane mirrors.

Part's oeuvre remains deeply influenced by the liturgy of the Orthodox Church, of which he is a devout member. "If anybody wishes to understand me, they must listen to my music; if anybody wishes to know my 'philosophy' then they can read any of the Church Fathers; if anybody wishes to know about my life, then there are things that I wish to keep closed..." He also practices this reserve in a mystical silence, in which he seeks to overcome the surrounding chaos and extract its essence: "Gregorian chant has taught me what a cosmic secret is hidden in the art of combining two or three notes." When he wrote Summa in 1977, he took his inspiration from the Catholic liturgy, setting to music the Credo in unum deum("I believe in one God"). In 1991, he decided to strip the sacred text out of the work while trying to preserve its liturgical character. A fluid work that muddles harmonic relationships despite the fact that Part uses primarily the notes of a single triad, transforming them rhythmically and through three instrumental combinations (two violins, cellos and viola, and tutti strings), Summa sounds somewhat like a distant echo of Ockeghem.

Wallfahrtslied (Pilgrim's Song), based on Psalm 121, was reworked for men's choir and string orchestra in 2001. For Part, the human voice is the most perfect of instruments. "It is the words that provide the creative impetus for the music, just as God is the Logos, the procreative power bringing the cosmos incessantly into being. To the religious initiate, the words of a ritual are not symbols of a greater reality, but actually possess and are possessed by the thing they name."

Even in his very first attempts at composition, Part took inspiration from the past, employing a collage technique with certain compositions of Bach. In July 1990, after learning of the death of his friend Oleg Kagan, a violinist well known for his interpretations of Mozart concertos, Part wrote Mozart-Adagio, taking the slow movement of Mozart's Sonata K. 280 and arranging it for violin, cello and piano. Revised in 2005 the work brings out certain dissonances and heightens the tragic nature of this elegy in F minor.

Whether in reinterpreting a great master, writing a liturgical work, or seeking the essence of music in a few triads, Arvo Part is a unique voice in contemporary music, which is why Angele Dubeau feels so strongly about portraying this distinctive composer. "I need to withdraw and depict something objective," Part says. "The more we are thrown into chaos, the more we have to hold to order." And for a world that all too often lacks balance, music with such buoyant melodies, delightful sonorities, and candid spirituality cannot but itself be a source of inspiration.