Under the leadership of andris nelsons, Boston Symphony Orchestra enters into new multidimensional relationship with Leipzig's Gewandhaus Orchester in connection with Mr. Nelsons' appointment as that orchestra's gewandhauskapellmeister beginning in fall 2017; mr. nelsons takes on new title in addition to his dedicated commitment as the bso's music director through 2022 and beyond

BSO/GWO alliance-to take place over a five year period starting in 2017-18-to feature co-commissioning program, educational initiatives, shared and complementary programming, and residencies by the bso in leipzig and gwo in boston; new alliance to also explore musician exchanges between two orchestras

BSO to celebrate "leipzig week in boston" and gwo to celebrate "boston week in leipzig" spotlighting each others musical traditions as part of their respective subscription seasons partnership informally begins in may 2016 when bso makes its debut performance in Leipzig's world-famous gewandhaus christoph wolff, adams university professor at harvard university, former director of the Bach archive in Leipzig, and author of numerous acclaimed texts on the history of music from the 15th to 20th centuries, to serve as an artistic advisor to the BSO/GWO alliance

Boston Symphony Orchestra and  BSO Music Director Andris Nelsons will enter into a unique multidimensional partnership with  Leipzig's  Gewandhausorchester in connection with Mr. Nelsons' appointment as that orchestra's Gewandhauskapellmeister, starting with the 2017-18 season. Mr. Nelsons takes on this new title with the Gewandhausorchester in addition to his long-term commitment as the Boston Symphony Orchestra Music Director through 2022 and beyond; the GWO appointment also plays a role in consolidating Mr. Nelsons' European activities. The  BSO/GWO Alliance will explore the many historic connections between these two world-famous orchestras, inspire new cultural exchanges, and create a wide spectrum of performance and educational programs designed to bring a new dimension of concert experience to each of the orchestra's respective audiences. As the central figure in bringing the BSO and GWO together, Andris Nelsons will be intricately involved in the planning and implementation of all the programming initiatives between the two orchestras.

The Boston Symphony Orchestra and Gewandhausorchester Alliance will informally begin in May 2016 when the BSO, as part of a European tour to the major musical capitals of Austria, Germany, and Luxembourg, makes its debut performance in Leipzig's Gewandhaus, one of the great European halls after which Boston's Symphony Hall was modeled (1884 version). The BSO/GWO Alliance officially takes place over a five-year period beginning with the 2017-18 concert season.

The BSO/GWO Alliance, under the leadership of Andris Nelsons, will feature a series of co-commissions, with new works presented each year of the partnership, starting with a work by German composer  Jörg Widmann to be premiered in Boston and Leipzig in the 2017-18 concert season. The commissioning program-featuring an array of international composers representing a diversity of styles and generations-will create new works to be performed by both ensembles during their subscription seasons. The Alliance will also focus on some key educational initiatives including a program that will give Conducting Fellows of the Tanglewood Music Center (BSO's acclaimed summer music academy in western Massachusetts) an opportunity to assist Andris Nelsons with his work with the Gewandhausorchester. BSO musicians will also take part in the GWO's chamber music education series.

During the 2017-18 subscription season, the BSO will celebrate "Leipzig Week in Boston" at Symphony Hall and the GWO will celebrate "Boston Week in Leipzig" at the Gewandhaus, giving each orchestra an opportunity to focus on some of the repertory for which their partner organization is best known. Since its founding in 1743, the GWO has been associated with some of the greatest figures of music history.  The orchestra has given the premiere of works by such luminaries of the classical music as Beethoven, Schumann, Mendelssohn, and Brahms; this tradition has continued into the 20th and 21st centuries with scores by such significant composers as Henze, Kanscheli, and Rihm, among others.  The BSO's own compositional legacy is, likewise, without parallel, including some of the seminal scores of the last century from composers ranging from Stravinsky, Prokofiev, and Bartók, to Messiaen and Dutilleux, and a myriad of Americans including, Copland, Bernstein, Sessions, Carter, and Harbison, among others. This programming strand-with each orchestra spotlighting the others musical tradition-will also be featured in chamber music performances, lectures, panel discussions, and exhibits, with the goal of bringing audiences a new understanding of this great repertoire.

One of the most exciting components of the Alliance will be a chance for the BSO to perform at the Gewandhaus in Leipzig and the GWO to perform at Symphony Hall in Boston, giving each orchestra's audience a chance to appreciate this new partnership first hand. The BSO/GWO Alliance will also explore musician exchanges between the two orchestras.

Christoph Wolff, Adams University Professor at Harvard University, former Director of the Bach Archive in Leipzig (2001-13), and author of numerous acclaimed texts on the history of music from the 15th and 20th centuries, will serve as an artistic advisor to the BSO/GWO Alliance (please see biography below). Further details about the programs of the BSO/GWO Alliance will be announced at a later date.

"I am thrilled to accept the appointment of Gewandhauskapellmeister alongside my music directorship with the remarkable Boston Symphony Orchestra," said Andris Nelsons. "It is also an immense privilege to be partnering these two world class institutions-each with their own deeply rich musical heritage-and to be leading them in an innovative and forward-thinking alliance spanning two continents. This wonderful new alliance between the BSO and GWO will give us a unique opportunity to explore each of these orchestra's great music traditions, as well as create exciting and meaningful new experiences for our audiences at home and around the world. We are very much looking forward to the musical journey that lies ahead."

"This new alliance between the Boston Symphony Orchestra and the Leipzig Gewandhaus Orchestra, which will celebrate the historical importance of each organization, highlight our shared heritage, and stimulate new artistic synergies, is uniquely collaborative in the orchestra world and will no doubt inspire a new dimension of creative programming for both orchestras," said Mark Volpe, BSO Managing Director. "This new partnership also emphasizes Andris Nelsons' role as a visionary leader who thinks creatively about extending the reach of the BSO through unique programming, touring, recordings, new media, and artistic partnerships. Under Andris Nelsons' guidance and leadership, the BSO and GWO Alliance will create opportunities for important musical and cultural exchanges and bring the extraordinary musical gifts of each orchestra to a greater world-wide audience."

"I am overjoyed that we have been able to initiate an exceptional artistic cooperation between the Boston Symphony Orchestra and the Gewandhausorchester," said Prof. Andreas Schulz, Gewandhaus director. "And I am thankful that this cooperation will be spurred on by Andris Nelsons as our common Principal Conductor, employing his wide array of artistic concepts. I am looking forward to working closely with Mark Volpe and his team at the BSO, as well as the eminent music scholar Christoph Wolff, who will act as an artistic advisor. We are founding a new and unique musical family which will set new artistic standards. Our common musical history and our unique individual growth provide us countless opportunities to expand our view of the past and the present as we craft delightful concerts with special programs that will resonate for our own and for our partner's audiences."

The history of close cultural connections between Boston and Leipzig began in 1881, when the Boston Symphony Orchestra's founder, Henry Lee Higginson, appointed Leipzig Conservatory-trained Georg Henschel as its first conductor. Subsequent conductors of the BSO, including Wilhelm Gericke, Emil Pauer, Max Fiedler, Karl Muck, and most importantly, Arthur Nikisch, were all educated in Leipzig and also held posts with the Gewandhausorchester. From the middle of the twentieth century, the Leipzig tie was reinforced when Charles Munch became the Music Director of the BSO in 1949, remaining in the position until 1962. Munch was also educated in Leipzig and had been Concertmaster of the Gewandhausorchester from 1926 to 1933.

Symphony Hall, Boston, dedicated in 1900, is not simply a replica of the Gewandhaus that opened its doors in 1884 and was destroyed in 1944, as is often reported. Mr. Higginson had visited the Leipzig concert hall while touring Europe and had instructed his team of architects to design a larger version of the Gewandhaus, with as many as 2600 seats. Boston's new hall also added the latest acoustical principals to the overall design of its Leipzig counterpart. These acoustical principals played a major role in determining the size of the stage and the placement of sound absorbing statues in the auditorium, among other features. In 1974, the Gewandhausorchester appeared in Boston's Symphony Hall during its first USA tour. To date, Boston has welcomed the Gewandhausorchester for ten guest performances, including its most recent appearance in the 2014-15 concert season. While the BSO has not yet performed in the Gewandhaus, the Leipzig hall featured the Boston Youth Symphony Orchestra, affiliated with the BSO, in 2008 during its European tour. As previously mentioned, the BSO will make its debut appearance at the Gewandhaus in May 2016. 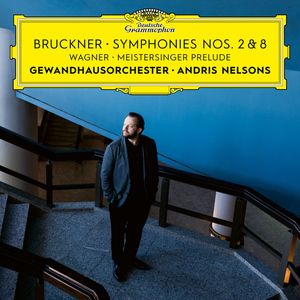 This time the Symphonies are coupled with Wagner's Meistersinger Prelude. The Orchestra and the Latvian Maestro recently announced the extension of their acclaimed partnership until 2027.

The Gewandhausorchester and Andris Nelsons's acclaimed series of Bruckner – Wagner albums continues. "Everything in this symphony has been formulated with the utmost clarity," the Gewandhaus Orchestra's Kapellmeister, Andris Nelsons, reflects on Bruckner's Second Symphony. "The wonderful themes are clearly separated from one another by means of rests in the full orchestra, and yet there is still the sense of a single coherent whole. It is astonishing that this work is so rarely performed – it is actually an ideal point of entry for anyone wanting to explore the world of Bruckner's symphonies." The theme of the misunderstood artist is also central to the comic opera Die Meistersinger von Nürnberg by Wagner – a composer whom Bruckner revered as the "master of all masters".