August of 2008, Andrew Wan was named concertmaster of the Montreal Symphony Orchestra (MSO), making him one of the youngest leaders of a major symphony. His relationship with the orchestra began with performances of Elgar's Violin Concerto, hailed as one of the top two musical moments of 2007 by La Presse.

As soloist, he has appeared in Canada, the United States, China, New Zealand, Cuba, Argentina, Brazil, and Switzerland under conductors such as Jean-Claude Casadesus, Maxim Vengerov, Peter Oundjian, Jacques Lacombe, Vasily Petrenko, James DePreist, Bernard Labadie and Michael Stern. In May of 2012, he closed the MSO's inaugural season in the Maison Symphonique with Shostakovich's First Violin Concerto, conducted by music director Kent Nagano, and on their tour of South America in April of 2013, he performed as soloist and concertmaster in Ravel's Tzigane and Rimsky-Korsakov's Scheherazade. The 2013-14 season marked the world premiere of a work commissioned for him and the MSO – Les mouvements de l'âme, by Serge Arcuri. His live recording of the three Saint-Saëns Violin Concerti with Nagano and the MSO were released by Analekta in the fall of 2015 to wide critical acclaim.

Mr. Wan has concertized extensively throughout the world, appearing in venues such as Carnegie Hall, Tonhalle Zürich, the Kennedy Center, Suntory Hall, and Salle Gaveau in chamber music performances with artists such as the Juilliard Quartet, Vadim Repin, Emanuel Ax, Gil Shaham, Marc-André Hamelin, Jörg Widmann, Menaham Pressler, and Cho-Liang Lin. He frequently serves as guest concertmaster for several North American orchestras and has appeared as artist and faculty at the St. Prex, Seattle, Edinburgh, La Jolla, Toronto Summer, Morningside Music Bridge, Aspen, and Orford Music Festivals. Discography includes Grammy and Juno award-nominated releases on the Onyx, Bridge, and Naxos labels with James Ehnes and the Seattle Chamber Music Society, the Metropolis Ensemble, and the Opus-award winning New Orford String Quartet, of which he is a founding member.

Mr. Wan received his Bachelor of Music and Master of Music Degrees from the Juilliard School under the tutelage of Masao Kawasaki and Ron Copes. In 2008, he was the only violinist to be accepted into the prestigious Artist Diploma Program at Juilliard. He is currently Assistant Professor of Violin at the Schulich School of Music at McGill University.

Andrew Wan performs on a 1744 Michel'Angelo Bergonzi violin, and gratefully acknowledges its loan from the David Sela Collection.

Silver medalist and laureate of the Krystian Zimerman award of the best sonata at the International Chopin Piano Competition in 2015, Charles Richard-Hamelin is standing out as one of the most important pianists of his generation. He also won the second prize at the Montreal International Musical Competition and the third prize and special award for the best performance of a Beethoven sonata at the Seoul International Music Competition in South Korea. Charles was recently awarded the Order of Arts and Letters of Quebec and the prestigious Career Development Award offered by the Women's Musical Club of Toronto.

Originally from Lanaudière in Québec, Charles Richard-Hamelin studied with Paul Surdulescu, Sara Laimon, Boris Berman and André Laplante. He is a graduate from McGill University, the Yale School of Music, the Conservatoire de Musique de Montréal and now works on a regular basis with pianist Jean Saulnier.

His first solo recording, which features late works by Chopin, was released in September 2015 on the Analekta label and received widespread acclaim from critics throughout the world (Diapason, BBC Music Magazine, Le Devoir) as well as a Felix Award (ADISQ). A second album, recorded live at the Palais Montcalm in Quebec City with music by Beethoven, Enescu and Chopin, was released in the fall of 2016 and also had a very positive welcome (Gramophone, La Presse, The WholeNote).

Charles Richard-Hamelin's 2017-2018 season highlights include three tours in Japan, the recording of the first volume of the complete Beethoven violin sonatas with Montreal Symphony Orchestra Concertmaster Andrew Wan as well as over 60 concerts in Canada, Asia, Europe and the USA. 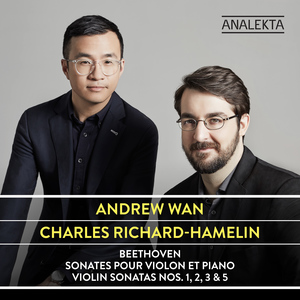 Analekta announces the release of the second volume of Beethoven's complete Violin Sonatas, performed by two of the most outstanding musicians of their generation, Andrew Wan, concertmaster of the Orchestre symphonique de Montréal since 2008, and Charles Richard-Hamelin, winner of the silver medal and the Krystian Zimerman prize at the 2015 International Fryderyk Chopin Piano Competition in Warsaw.

Radio-Canada considered the first volume as one of the best classical albums of 2018. The skillful and expressive playing of these two musicians and their musical bond on this second volume make for a thrilling music listening experience and a remarkable contribution to the celebration of Ludwig van Beethoven's 250th anniversary.