András Schiff is world-renowned and critically acclaimed as a pianist, conductor, pedagogue and lecturer.  Born in Budapest, Hungary in 1953, Mr. Schiff started piano lessons at age five with Elisabeth Vadász. He continued his musical studies at the Ferenc Liszt Academy with Professor Pál Kadosa, György Kurtág and Ferenc Rados, and in London with George Malcolm.

Indisputably one of the most prominent proponents of the keyboard works of J.S. Bach, Mr. Schiff has long proclaimed that Bach stands at the core of his music making. Through November 2013, András Schiff will continue his two-season endeavor, The Bach Project, when it returns to North America, comprising six Bach recitals and a week of the orchestral music of Bach, Schumann and Mendelssohn with Mr. Schiff at the piano and on the podium.  The Project will visit Symphony Hall, supported by the San Francisco Symphony, Disney Hall, supported by the LA Phil, and New York City in partnership with the New York Philharmonic, Carnegie Hall, 92Y and Great Performers at Lincoln Center. Repertoire for The Bach Project recitals will include The Complete Partitas and The Goldberg Variations andMr. Schiff's final recitals in San Francisco, Los Angeles, Boston, Toronto, and New York will feature a unique program with Beethoven's Diabelli Variations following the Goldberg Variations. Mr. Schiff also plays this monumental program in London's Wigmore Hall to celebrate his 60th birthday.

Mr. Schiff has established a prolific discography, and since 1997 has been an exclusive artist for ECM New Series and its producer, Manfred Eicher.  Recordings for ECM include the complete solo piano music of Beethoven and Janácek, two solo albums of Schumann piano pieces, his second recordings of the Bach Partitas and Goldberg Variations, The Well Tempered Clavier, Books I and II and now Beethoven's Diabelli Variations recorded on two instruments:  The Bechstein from 1921 and an original fortepiano from Vienna 1820 – the place and time of the composition.

András Schiff has worked with most of the major international orchestras and conductors, but now he performs mainly as conductor and soloist. In 1999 he created his own chamber orchestra, the Cappella Andrea Barca, which consists of international soloists, chamber musicians and friends.  He also works every year with the Philharmonia Orchestra and the Chamber Orchestra of Europe.

Since childhood he has enjoyed playing chamber music and from 1989 until 1998 was Artistic Director of the internationally praised "Musiktage Mondsee" chamber music festival near Salzburg. In 1995, together with Heinz Holliger, he founded the "Ittinger Pfingstkonzerte" in Kartause Ittingen, Switzerland. In 1998 Mr Schiff started a similar series, entitled "Homage to Palladio" at the Teatro Olimpico in Vicenza. From 2004 to 2007 he was Artist in Residence of the Kunstfest Weimar.  In the 2007-8 season he was Pianist in Residence of the Berlin Philharmonic.

András Schiff has been awarded numerous international prizes and his relationship with publisher G Henle continues over the next few years with a joint edition of Mozart's piano concertos and both volumes of The Well-Tempered Clavier.

In the spring of 2011 Mr. Schiff attracted attention because of his opposition to the latest Hungarian media law, and in view of the ensuing attacks on him from some Hungarian nationalists, has made the decision not to perform or return to his home country.

András Schiff has been made an Honorary Professor by the Music Schools in Budapest, Detmold and Munich, and a Special Supernumerary Fellow of Balliol College (Oxford, UK). 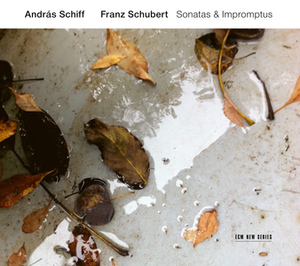 Here is a Schubert recording for our times, made in a small hall in Bonn on a historically appropriate instrument intended for an intimate setting. An interpretation of subtle nuances, fine shadings and regional flavors, emphasizing the cultural framework that defined this music.

When András Schiff's first double album with late piano works by Franz Schubert was released on ECM New Series in 2015, critics and audiences paid particular attention to the pianist's choice of a fortepiano built by Franz Brodmann in 1820. In the liner notes, Schiff explained his conversion "from Saul to Paul", advocating a historically informed style of playing on instruments used in the classical era and describing the tonal characteristics of the Brodmann piano. The timbre of the instrument, he reasoned, reflected "a typically Viennese quality, gentle, melancholy, and song-like". And since Schubert, like no other composer, used "the soft notes, the quietest sounds" to touch our hearts, the excellently preserved Brodmann with its four pedals serves these "quietest sounds" particularly well.