"Somebody once asked me to find two words that describe the music I make, and the words I picked were 'spontaneous' and 'cinematic,'" says Aaron Parks. Having clarified the essence of his art, the pianist kept those two words closely in mind while conceiving and recording Invisible Cinema, his extraordinary debut for the Blue Note label. In its virtuosity and harmonic complexity, Invisible Cinema speaks to Parks's immersion in jazz on the highest level, even as it references a wider world of contemporary music-making.

"The title has a lot of different meanings," notes the 24-year-old Seattle native, who is currently based in Brooklyn. "For one thing, Invisible Cinema is what music is, in a sense. You can't see it. But there's all this drama between the musicians, all these stories that can be told. Also, I was thinking about actual cinema, and this album has a story line that I wouldn't spell out to anybody, because I want to leave it open to interpretation. But for me there's a narration in the sequence and song titles and everything."

Parks came to the attention of Blue Note during his five-year tenure with Terence Blanchard, during which he appeared on three of the trumpeter's acclaimed Blue Note albums: Bounce, Flow and A Tale of God's Will. Parks is now delighted to follow the example of another Blanchard alum, Lionel Loueke, who debuted on Blue Note with the evocative album Karibu in March 2008. "I'm thrilled to be a part not only of the classic Blue Note legacy, but also the new legacy, which includes Terence, Lionel, Robert Glasper, Jason Moran, Cassandra Wilson and so many great artists," Parks enthuses.

Invisible Cinema finds Parks in excellent form as both a soloist and composer, buoyed by the support of guitarist Mike Moreno, bassist Matt Penman and drummer Eric Harland. Together and apart, these players have assumed roles at the forefront of jazz in the new millennium. Harland has made lasting music with Geri Allen, the legendary Charles Lloyd and of course Terence Blanchard, in whose band Harland first encountered the young Aaron Parks. Moreno, fast becoming one of the most sought-after plectrists of his generation, featured Parks on his own acclaimed debut album, Between the Lines. Penman, Harland and Parks were also heard to great effect on the bassist's 2007 release, Catch of the Day.

Parks recalls a Harland-led quartet tour of Japan, with Penman and guitarist Kurt Rosenwinkel, as "one of the most amazing musical experiences of my life. Playing with that rhythm section is so easy. They just fit each other like a glove." If Penman and Harland were a natural choice for Invisible Cinema, Mike Moreno was the puzzle piece that brought it to completion. "With the guitar quartet, these songs really started to make sense to me," Parks notes. "It was exactly the sonic environment I needed. Mike and I have played together with Kendrick Scott, in John Ellis's band and so many other contexts. There's this lyricism about his playing that I'm really into."

At its core, Invisible Cinema is an acoustic jazz record, yet it evokes other sonic and rhythmic frontiers through the use of subtly added keyboards, meticulously varied guitar sounds and unorthodox beats. "I'd sometimes give Eric a very specific drum part to learn," Parks explains. "But as soon as he'd get what I wanted, I'd tell him to forget it, let it go." In this way, Parks coaxed free interaction and discovery from all involved. "The music that I write has a lot of structure, a lot that's written into the pieces, but there's also room for new things to happen at the same time. I like writing songs that are simple on some level, letting the musicians work their magic in those little nebulous cracks, the spaces
I leave open."

Parks evokes a broad range of textures on Invisible Cinema, from the bright feel and metallic snare drum attack of "Travelers" to the rock-influenced grooves of "Riddle Me This" and "Nemesis"; from the multipart structure and dizzying piano-guitar solo exchanges of "Peaceful Warrior" (written for Loueke) to the lilting 5/4 ballad "Praise." "There's a lot of drama built into the pieces," Parks observes. "A lot of my favorite bands have that. Wayne Shorter's quartet is all about drama."

There is drama to be found, of course, in music well beyond the jazz realm, and Parks, like many of his peers, has nourished an eclectic taste. "I listen to tons of rock," he says, "and I'm influenced by the artists lots of jazz players listen to, like Radiohead and Bjork, but also Talk Talk, Blonde Redhead, Me'shell Ndegeocello and straight-up indie-pop like Death Cab for Cutie, unashamedly."

After mentioning the full-blast guitar solo on "Harvesting Dance" as a key rock-like moment on the album, Parks notes how Bulgarian music and the work of John Zorn's Masada also influenced the piece, which was previously recorded on Terence Blanchard's Flow. One can contrast this with the plaintive solo piano tracks "Into the Labyrinth" and "Afterglow," which Parks calls "scene changes," or the jaunty, bluesy vibe of "Roadside Distraction," described by the pianist as an anomaly. "That song is really a part of the 'invisible cinema' right there," he laughs. "It really animates a specific scene."

For Parks to make such a strong showing at the tender age of 24 isn't surprising. At age 14 he enrolled in an early entrance college program; by 15 he was attending University of Washington with a triple-major in math, computer science and music. "Early on I never thought I could have a career in music," he recalls. "But then I started to have those experiences where you're playing and you completely lose yourself, and the music plays you. I got so addicted to that feeling. I think everyone who plays improvisational music tries to reach that state. Hopefully, if you do it more and more, you find the trick to make
it more consistent."

With his technically involved yet boundlessly melodic and sensitive playing, and with the sense of color and imagination he conveys in every musical situation, Parks is setting a new standard for jazz piano expression. In the time since his stint with Terence Blanchard, he has toured the world as a member of Rosenwinkel's quintet. At the Jazz Gallery, a groundbreaking jazz venue in lower Manhattan, he recently premiered a new collection of pieces titled "Archetypes: Character Studies in Sound," as part of the Gallery's prestigious Composer Series. In his recent recordings as a sideman-on Christian Scott's Anthem, Kendrick Scott's The Source, Gretchen Parlato's self-titled debut as well as the above-mentioned titles by Moreno and Penman-Parks has imbued the music of his peers with a spirited, searching intelligence. Invisible Cinema, his most significant milestone to date, sends him off and running on a solo career that is sure to awe listeners for years to come. 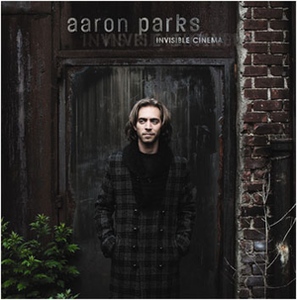 "Somebody once asked me to find two words that describe the music I make, and the words I picked were 'spontaneous' and 'cinematic,'" says Aaron Parks. Having clarified the essence of his art, the pianist kept those two words closely in mind while conceiving and recording Invisible Cinema, his extraordinary debut for the Blue Note label. In its virtuosity and harmonic complexity, Invisible Cinema speaks to Parks's immersion in jazz on the highest level, even as it references a wider world of contemporary music-making.